Duterte told: Impeaching a President is not a crime 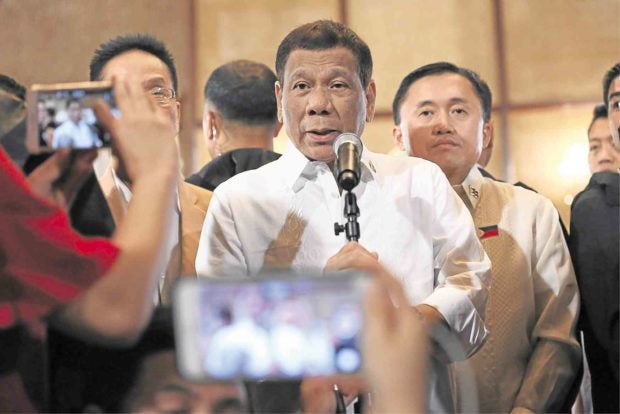 “You scare me with impeachment, son of a bitch, just try doing it… Just try me, try me. If you are a man and you are brave and have balls, do it, son of a bitch”
Rodrigo Duterte, President

President Duterte’s threat to jail anyone who would attempt to impeach him drew a sharp rebuke on Friday from an opposition senator who reminded him that filing an impeachment complaint was a legal process.

“Impeaching a President is not a crime,” Sen. Francis Pangilinan said.

Pangilinan, the president of the Liberal Party, reacted to Duterte’s angry remarks in Malacañang on Thursday night threatening opponents with prison if they tried to impeach him for allegedly failing to protect the country’s territory.

“I will be impeached? I will jail them all. Just try it. Try to do it, do it, and I will do it,” the President said.

He blew his top when asked to comment on former Foreign Secretary Albert del Rosario’s suggestion that Mr. Duterte could face impeachment for reneging on his constitutional duty to protect Philippine sovereignty.

The President vented his anger amid accusations that he was siding with China over the June 9 sinking of a Philippine fishing boat by a Chinese trawler at Recto Bank in the West Philippine Sea, waters within the country’s 370-kilometer exclusive economic zone (EEZ) in the South China Sea.

He was also roundly criticized earlier in the week when he said that China would not agree to a ban on Chinese fishermen within the Philippines’ EEZ.

Pangilinan said the LP had not discussed any plans to file an impeachment case against the President.

Another LP member, detained Sen. Leila de Lima, said the President’s threat was part of his approach toward the opposition.

“No one, not even a popular President, is above the law,” De Lima said in a statement from Camp Crame, where she is detained on drug charges.

But proadministration senators played down the President’s threat of jail time to people who would try to impeach him, saying it was part of his usual rhetoric.

“The President knows he can’t do it and we know he won’t do it,” Sen. Panfilo Lacson said on Friday.

Lacson cautioned, however, that such a statement from the President could incite defiance in the House of Representatives, where all impeachment cases originate, as well as in the Senate, whose members sit as judges should the case go to trial.

“[The President’s] problem is when one third of the members of the [House] feel more challenged than afraid of his threat. A bigger problem is when 16 senators are convinced by the evidence presented during the trial,” Lacson said.

“Everything, of course, is hypothetical,” he added.

In 2017, Mr. Duterte—who enjoys substantial support in the House—weathered an attempt to impeach him over the thousands of alleged extrajudicial killings in his bloody war on drugs and his alleged subservience to China.

That case, filed by Magdalo Rep. Gary Alejano, was dismissed by the House justice committee and did not reach the plenary.

“It’s the President’s style,” Recto said. “The reality is the President has a supermajority in the House of Representatives. Any impeachment complaint is doomed to fail.”

“I am deeply saddened. It is my hope that we will endeavor to do what is right. We will work to give primacy to our people over China,” Del Rosario said in a statement.

Malacañang defended what it said was the President’s “righteous indignation” against his critics, adding it was confident that any impeachment case against him would not succeed.

Presidential spokesperson Salvador Panelo on Friday said impeachment was essentially a numbers’ game and that Duterte had no reason to be scared.

“How can a President be scared with impeachment? An impeachment is a numbers’ game. There’s a [proadministration] supermajority now in Congress. It might not even pass the committee on jusitce,” Panelo said.

Asked if any attempt to impeach the President had a chance of succeeding, he said: “Definitely not.”

“Of course, it will not. It says there, culpable violation. How can he even be violating [the Constitution]? He’s even going beyond the provision. The provision says you protect the mineral, the maritime,” the Palace official said.

In his diatribe on Friday, Duterte said he had sacrificed a lot for the country but was still criticized by his opponents.

“Erap (former President Joseph Estrada) said it before, ‘You will end up in the gutter.’ Do it to me. You fuck with me, I will show you how not to properly run a government,” he said.

Mr. Duterte also insisted there was no other choice to assert the country’s sovereignty in the West Philippine Sea but to go to war.

But Panelo said the President simply wanted to avoid an armed confrontation with China over the Philippines’ territorial claims in the disputed waterway.

“If that happens, then all these natural resources can no longer be utilized, used and taken advantage of by the very people he wants to protect. That is his rational; that is why he’s so angry,” Panelo said.

Senators said the President was incorrect to say that invoking the country’s defense pact with the United States and dragging the superpower to the territorial dispute would only bring the Philippines closer to war with China.

“I don’t think involving the US would be tempting war with China,” Recto told reporters in a text message. “A multilateral diplomatic approach is good for the Philippines.”

Pangilinan said any talk of war over the South China Sea dispute was unfounded. “Indonesia, Malaysia and Vietnam all have asserted sovereignty in these disputed waters repeatedly and yet no war has been declared by any of these countries,” he said.

“To say that asserting our legitimate claim over our exclusive economic zone will lead to war is meant to justify our subservience and docility,” he added.

Meanwhile, party-list lawmakers on Friday challenged Mr. Duterte to disclose the terms of a fishing agreement he supposedly forged with Chinese President Xi Jinping in October 2016.

“This supposed deal was to allow China access to the Philippines’ EEZ in the South China Sea. But why is it that it is only three years later that they are talking about this agreement?” Bayan Muna Representatives Carlos Zarate and Ferdinand Gaite said.  —WITH REPORTS FROM MELVIN GASCON