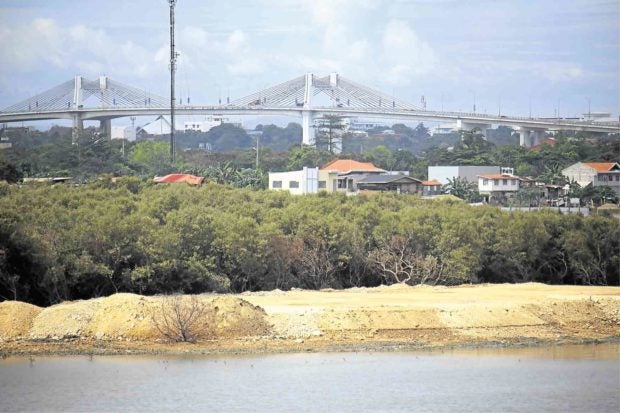 HOUSING SITE Mangroves were cut in Barangay Paknaan in Mandaue City as a developer reclaims a section of Cansaga Bay for a housing project. —JUNJIE MENDOZA

CEBU CITY — The Department of Environment and Natural Resources (DENR) in Central Visayas is investigating a local developer for cutting mangroves and reclaiming a portion of Cansaga Bay for a housing project.

Gilbert Gonzales, DENR regional executive director, told the Inquirer that they had ordered the developer, Raul Canoy, to explain and present documents to prove that he was authorized to cut mangroves and reclaim the bay located near the bridge in Mandaue City.

“The developer was already summoned for technical conference, and development activities in the area were already ordered stopped pending verifications of land ownership and permit compliance,” Gonzales added.

The group first called the attention of the Mandaue City government late last year when its members, who lived in the area, noticed that mangroves were being cut down to pave the way for a reclamation.

The Mandaue government issued a cease-and-desist order against the developer. It sent policemen to the area and ordered the property to be secured by a fence.

But the reclamation project continued, prompting Kalstuhai to raise the matter to the DENR.

On June 19, the DENR, the developer and Kalstuhai members met in a technical conference where Canoy was told to present documents to prove that what his company did was legal.

The Inquirer tried but failed to reach Canoy for comments on Thursday and Friday.

Jose Cleo Colis of the Provincial Environment and Natural Resources Office said mangrove patches should be preserved and protected as these prevented storm surges and served as breeding ground for fish.

“We have to take care of mangroves. If they are gone, it will surely affect our ecosystem,” he said.

Section 43 of Presidential Decree No. 705, or the Revised Forestry Code of the Philippines, prohibits the clear cutting operations in all mangrove swamps intended for coast protection.

“Strips of mangrove forest bordering numerous islands, which protect the shoreline, the shoreline roads and even coastal communities from the destructive force of the sea during high winds and typhoons, shall be maintained and shall not be alienated,” the law states.

“Such strips must be kept from artificial obstruction so that floodwater will flow unimpeded to the sea to avoid flooding or inundation of cultivated areas in the upstream,” it added.