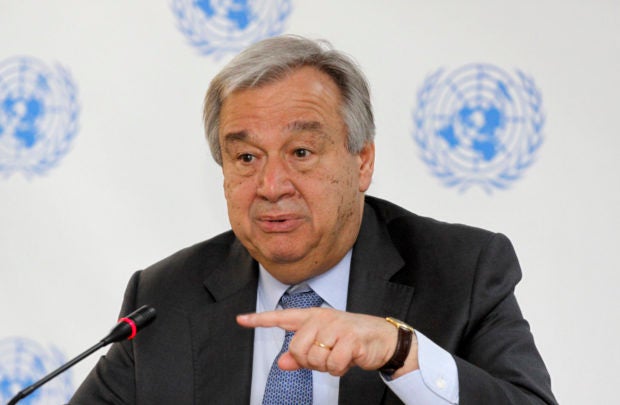 OSAKA — The United Nations (UN) chief said the world can’t afford the conflict as tensions rise between Iran and the United States.

U.N. Secretary-General Antonio Guterres said on the sidelines of the two-day G-20 leaders’ summit Friday that it is “essential to deescalate the situation” and avoid confrontation.

His comments come as Iran is poised to surpass a key uranium stockpile threshold, threatening an accord it reached in 2015 with world powers aimed at curbing its nuclear activity.

The U.S. has imposed new sanctions on Iran to cripple its economy, sent an aircraft carrier to the region, and deployed more troops alongside the tens of thousands already there.

At the same time, the U.N. chief is urging G-20 leaders to take action on equitable and stable reforms to strengthen the global financial safety net and increase the global economy’s resilience.

Guterres said in a letter to leaders gathered here for the two-day summit beginning Friday that while the world has made progress fixing some big problems it’s not happening fast enough or shared by all countries.

Guterres further said that while there are good plans and vision, what’s needed are “accelerated actions, not more deliberations.”

He said that fast and equal economic growth should be constructed so that people who live in “the ‘rust belts’ of the world are not left behind.” /kga