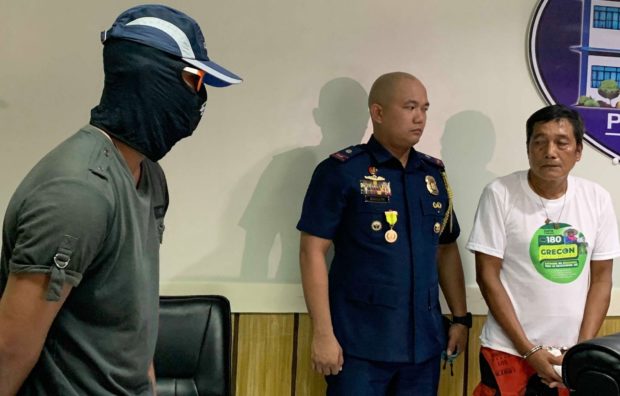 Baltazar Saldo (right) is presented in a police press conference after he was purportedly identified by a witness (left) to be alleged former Negros rebel leader Virgilio Paragan. He was later released over doubts on his identity. CONTRIBUTED PHOTO

ILOILO CITY –– A truck driver in Capiz wants the police to apologize for arresting him and wrongly tagging him as a former rebel leader.

Baltazar Saldo, 54, in an interview with dyOW Bombo Radyo in Roxas City in Capiz, said no amount of money could compensate for the shame and the harm on their family’s reputation resulting from what he said was a mistaken arrest.

He said he was terrified by his arrest and his presentation before a press conference at the regional police headquarters in Camp Martin Delgado in Iloilo City.

Friends and acquaintances of Saldo have posted on social media sites of radio stations in Capiz belying the allegations against Saldo and condemning his arrest.

Bulalacao, who was set to retire from service on Thursday, said a witness identified Saldo as Virgilio Paragan alias Hassan, allegedly the former commanding officer of the Roger Mahinay Command of the New People’s Army (NPA) under the Negros Regional Committee of the Communist Party of the Philippines (CPP).

Bulalacao said Paragan was an active member of the CPP and NPA from 2000 to 2004 and was involved in numerous cases of arson and attacks against government troops and militiamen on Negros Island before he returned to Dumalag. He carried a P1,050,000 reward for his capture.

During the press conference, a masked man, purportedly the witness, pointed at Saldo to confirm that he was Paragan.

The lone witness is a son of a former NPA rebel who was allegedly killed by his former colleagues under Paragan, according to Bulalacao.

Bulalacao had said the arrest of Saldo, allegedly Paragan, was “one of the many significant accomplishments” of his office.

Saldo was brought to Kabankalan City in Negros Occidental on Monday afternoon, where one of the cases against Paragan was filed.

But police later released him upon the advice of the city prosecutor’s office because there was not enough basis to establish that Saldo and Paragan were the same persons.

The witness was also not a complainant in the cases.

The Police Regional Office in Western Visayas (PRO-6) insists that a witness identified Saldo as Paragan.

“We will let the court confirm his identity based on the testimony of the witness,” Lt. Col. Joem Malong, PRO-6 spokesperson, told the INQUIRER.

Lawyer Jonnie Dabuco, officer-in-charge of the Commission on Human Rights in Western Visayas, decried the “haphazard and disturbing” arrest of Saldo.

“(Saldo) was not named in the arrest warrant. If the police and military had evidence that he is Paragan, they should have sought the amendment of information and arrest warrant first,” Dabuco told the INQUIRER.

“We hope that this is not the new standard operating procedure wherein they arrest first before confirming the identity of the person arrested,” he said.

Dabuco also lamented the presentation of Saldo in a press conference even before his identity could be ascertained and before he was brought to the courts.

“Liberty is a sacred right that even courts are extra careful in issuing arrest warrants. We do not understand why this was done in a hurry and apparently without consultation or advice from lawyers or prosecutors,” Dabuco said.

He said they were waiting for Saldo to file a complaint at the CHR but they would conduct an investigation even without a complaint.

Operatives of the Criminal Investigation and Detection Group arrested Valle at the Laguindingan Airport in Misamis Oriental, brought her to Pagadian City, around 200 km, where she was held incommunicado for at least eight hours.

The police later admitted that they had mistaken Valle for alleged rebel leader Elsa Renton.

Valle, her family, and media groups have decried her arrest and detention, accusing the policemen of abduction. With a report from Carla Gomez, Inquirer Visayas