Trump, Democrats blame each other for migrant deaths

WASHINGTON – President Donald Trump and Democrats blamed each other Wednesday for the deaths of a migrant father and his toddler daughter whose bodies were seen in searing photographs, symbolizing the perils faced by those trying to cross illegally into the U.S.

Speaking to reporters as he left the White House for a four-day trip to Asia, Trump said he was disturbed by the images. 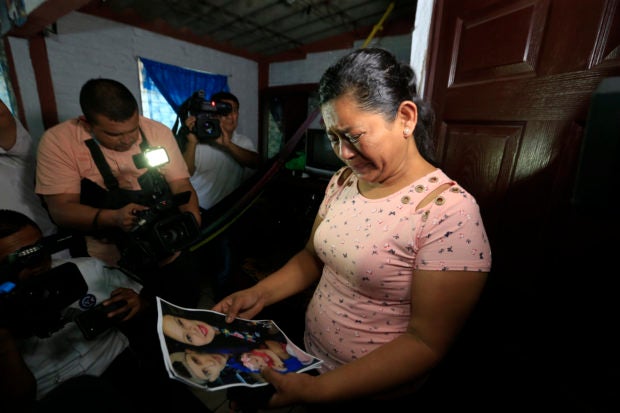 Rosa Ramirez cries when shown a photograph printed from social media of her son Oscar Alberto Martinez Ramírez, 25, granddaughter Valeria, nearly 2, and her daughter-in-law Tania Vanessa Avalos, 21, while speaking to journalists at her home in San Martin, El Salvador, Tuesday, June 25, 2019. The drowned bodies of her son and granddaughter were located Monday morning on the banks of the Rio Grande, a day after the pair were swept away by the current when the young family tried to cross the river to Brownsville, Texas. Her daughter-in-law survived. (AP Photo/Antonio Valladares)

But he said the deaths could have been prevented and castigated Democrats for failing to pass legislation he claimed would stop people from trying to make the dangerous trek.

“If we had the right laws, that the Democrats are not letting us have, those people, they wouldn’t be coming up. They wouldn’t be trying,” the president said. “They can change it very easily so people don’t come up and people won’t get killed.”

Oscar Alberto Martinez Ramirez and daughter Valeria were trying to cross into the U.S. after fleeing from El Salvador when they were swept into the Rio Grande.

Her arm was draped around his neck, suggesting she clung to her father in their final moments.

“I hate it,” Trump said when asked about the image, “and I know it could stop immediately if the Democrats change the law. They have to change the laws. And then that father, who probably was this wonderful guy, with his daughter, things like that wouldn’t happen.”

Both the Senate and House has approved separate legislation to provide funding for the care of migrants streaming into the U.S., but the bills have yet to be merged and the next step is unclear. Congressional leaders hope to send Trump a compromise measure before lawmakers leave town for a July 4 recess.

“That’s a disgrace. Mr. President, you are President of the United States,” Schumer said. “You are head of the Executive Branch. You control what’s happening at the border.”

Many Democrats vying to deny Trump a second term responded, meanwhile, by spending the final hours before their party’s first primary debate in Miami visiting a detention facility for immigrant teenagers about 40 miles to the southwest in Homestead.

“There were children who were being marched like little soldiers, like little prisoners,” said Massachusetts Sen. Elizabeth Warren, who wasn’t allowed inside but was permitted to look over the fence.

She added that she didn’t see children playing or laughing “like they usually do.”

“This is not what we should be doing as a country,” Warren said. “These children committed no crime, these children pose no threat.”

Rep. Debbie Mucarsel-Powell, the Democrat representing the area encompassing the Homestead facility, invited the entire field of 2020 Democratic presidential hopefuls to visit, saying the Trump administration was “inflicting maximum pain on families that flee trying to build a better life.” She is pushing for the complex to be shutdown.

O’Rourke tweeted a link to Le Duc’s photo and declared, “Trump is responsible for these deaths.”

From the scorching Sonora desert to the at-times fast-moving Rio Grande, the U.S.-Mexico border can be a perilous setting for those who cross it illegally between ports of entry.

Two babies, a toddler and a woman were found dead on Sunday, overcome by the sweltering heat. Elsewhere, three children and an adult from Honduras died in April after their raft capsized on the Rio Grande, and a 6-year-old from India was found dead earlier this month in Arizona, where temperatures routinely soar well above 100 degrees Fahrenheit. /gsg