CLINT, Texas (AP) – U.S. officials opened a Texas Border Patrol facility to journalists on Wednesday, offering a first inside glimpse of the station since migrant children reported living there in squalid conditions with inadequate food, water and sanitation.

Lawyers meeting with the children last week publicly detailed the conditions at the Clint facility outside El Paso, prompting an outcry and leading to the resignation of the acting head of U.S. Customs and Border Protection.

Customs officials denied allegations that the children weren’t given enough food or clothing, and the tour came as the Trump administration faces growing calls to provide more access to journalists, doctors and court observers. 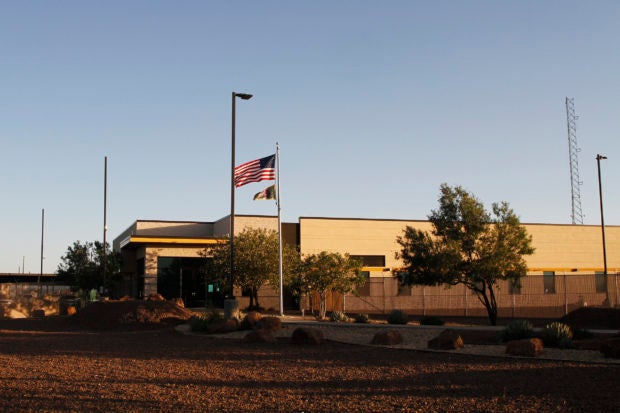 This June 20, 2019, image from video, shows the entrance of a Border Patrol station in Clint, Texas. Attorneys for a 7-year-old girl in government custody have sent legal notice to the Justice Department demanding her release. An attorney says that for four days her parents have been told she’s “in transit,” moving from one government facility to the next. Last week, attorneys visiting children in a Clint, Texas, Border Patrol station encountered the inconsolable girl amid conditions they said were perilous. Kids were taking care of kids, and there wasn’t enough food, water or sanitation. (AP Photo/Cedar Attanasio)

The government occasionally provides media tours of facilities housing children, but forbids cameras and any interaction with immigrants.

U.S. agencies have been scrambling to find adequate facilities for migrants streaming across the border with Mexico, and the Border Patrol has been detaining some children for weeks because the U.S. Department Health and Human Services said it doesn’t have the capacity to take them.

In one instance, the health department said it has been clearing mold from a facility in South Texas that will soon house up to 1,300 migrant children.

The agency said it was working quickly to open the facility at Carrizo Springs, which used to be a camp for oilfield workers. In addition to removing mold spots, agency spokeswoman Evelyn Stauffer said it also needs air conditioning and pipeline work.

Marsha Griffin, a pediatrician who visited children at two other Texas facilities this week, said that while the conditions were not as dire what had been described in Clint, there needs to be better access to the facilities.

“You have to go through a long process to get in,” said Griffin, who is co-chair of the American Academy of Pediatrics Immigrant Health Special Interest Group.

In an interview last week, acting Commissioner John Sanders blamed the problems in detention on a lack of money and called on Congress to pass an emergency funding bill to address the crisis.

The House and the Senate have since approved two separate bills providing funding, and congressional leaders hope to send President Donald Trump a compromise measure before lawmakers leave town for July 4 recess. /gsg

Read Next
Federal jury rules against Huawei in trade secrets case
EDITORS' PICK
Look Through: The fate of impounded stray dogs
House energy committee chair Arroyo bats for cheap electricity
What to watch out for when selecting a video surveillance solution
23,000 cops to be deployed nationwide for school reopening
Unleash the photographer in you this World Photography Day with vivo smartphones
DOH says COVID-19 cases plateauing, but public shouldn’t be ‘complacent’
MOST READ
Sharon Cuneta asks for prayers for friend in ICU who suffered silent stroke
Korina Sanchez reunites with former ABS-CBN co-anchors Julius Babao, Cheryl Cosim
Light therapy could be the answer to your sleep problems
Solons file resolutions seeking probe on ABS-CBN, TV5 merger
Don't miss out on the latest news and information.