‘They died in each other’s arms,’ migrant’s mother says

SAN MARTIN, El Salvador – The mother of a man who drowned alongside his 23-month-old daughter while trying to cross the Rio Grande into Texas says she finds a heartbreaking photograph of their bodies hard to look at but takes some comfort in knowing “they died in each other’s arms.”

Óscar Alberto Martínez Ramírez and his daughter Valeria were swept away by the current near Matamoros, Mexico, and Brownsville, Texas, this week. 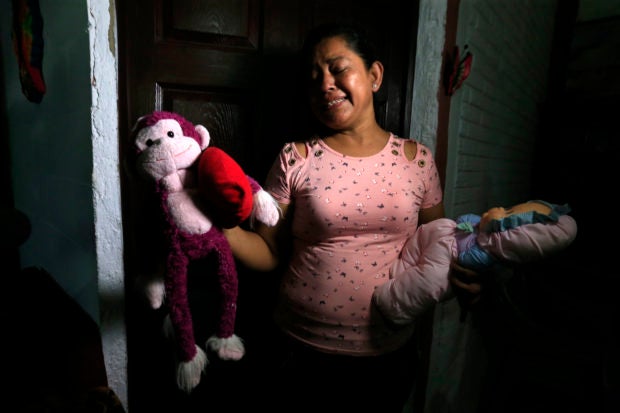 Rosa Ramirez sobs as she shows journalists toys that belonged to her nearly 2-year-old granddaughter Valeria in her home in San Martin, El Salvador, Tuesday, June 25, 2019. The drowned bodies of Ramirez’s son, 25-year-old Oscar Alberto Martinez Ramirez, and his daughter were located Monday morning on the banks of the Rio Grande, a day after the pair were swept away by the current when the young family tried to cross the river to Brownsville, Texas. Her daughter-in-law Tania Vanessa Avalos, 21, survived. (AP Photo/Antonio Valladares)

The grim photo shows the girl tucked inside her father’s shirt for protection with her arm draped over his neck — an image that underscores the dangers migrants and asylum-seekers face trying to make it to the United States and the desperate measures they resort to in the face of policies designed to deter them.

“It’s tough, it’s kind of shocking, that image,” the 25-year-old man’s mother, Rosa Ramírez, told The Associated Press. “But at the same time, it fills me with tenderness. I feel so many things, because at no time did he let go of her.”

“You can see how he protected her,” she said. “They died in each other’s arms.”

Ramírez had shared a sea-green brick home with barred windows in San Martin on the outskirts of the capital, San Salvador, with her son, his 21-year-old wife Tania Vanessa Ávalos and their daughter until the young family decided to make the journey north.

In their working-class neighborhood of about 40,000, Martínez worked in a pizzeria and Ávalos as a cashier in a fast-food restaurant, Ramírez said. 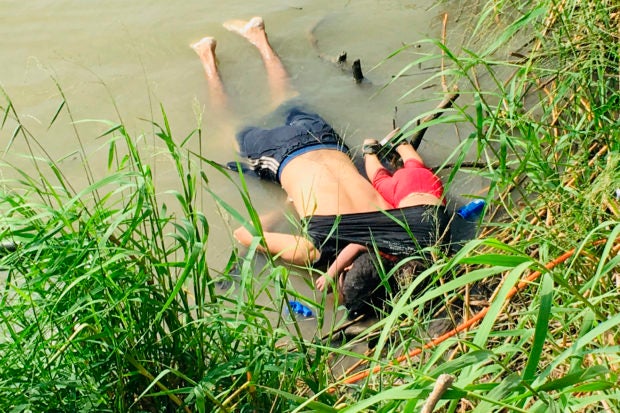 ADDS THAT PHOTO WAS FIRST PUBLISHED IN MEXICAN NEWSPAPER LA JORNADA – EDS NOTE: GRAPHIC CONTENT – The bodies of Salvadoran migrant Oscar Alberto Martínez Ramírez and his nearly 2-year-old daughter Valeria lie on the bank of the Rio Grande in Matamoros, Mexico, Monday, June 24, 2019, after they drowned trying to cross the river to Brownsville, Texas. Martinez’ wife, Tania told Mexican authorities she watched her husband and child disappear in the strong current. This photograph was first published in the Mexican newspaper La Jornada. (AP Photo/Julia Le Duc)

Ramírez said that she had given them the big room in the two-bedroom house, but they dreamed of saving money for a place of their own and that drove the family to head for the United States in early April.

Now she feels a hole that “nobody can fill, but God gives me strength,” she said.

Marta Argueta de Andrade, their 50-year-old neighbor, said she met the family about five years ago. She described them as “good people,” and Martínez as an easygoing young man.

“I would see him walking with the girl. I called her ‘little curly one,'” Argueta said. “She was very pretty.”

“I would say to those who are thinking of migrating, they should think it over because not everyone can live that American dream you hear about,” Ramírez said.

“We can put up a fight here,” she added. “How much I would like to have my son and my granddaughter here. One way or another, we get by in our country.”

The U.S.-Mexico border region has long been perilous for those trying to cross illegally into the United States between ports of entry, from the fast-moving Rio Grande to the scalding Sonoran Desert. A total of 283 people died while trying to cross last year; figures for 2019 have not yet been released.

On Sunday, Martínez decided to make that journey, swimming with Valeria from Matamoros to the Texas side of the Rio Grande, where he left her on the riverbank and started back to get his wife.

Seeing him leave, the girl threw herself into the water. Martínez returned to get her, but both were swept away. Ávalos was not harmed.

Tamaulipas immigration official Enrique Maciel said Ávalos was “in a total shock” and would not be speaking to reporters. Covered in white sheets, the two bodies were placed into a morgue van to be driven to a funeral home.

Ávalos was to fly back to El Salvador with them the following day.

Maciel said Ávalos had family in the United States and had hoped to reunite with them.

“She is afflicted. She is suffering. It is a dream they had to get ahead as a family, the three of them, and she returns in mourning with only the bodies of her family,” Maciel said.

He urged the governments of Mexico and the United States to view migration as people seeking life solutions, not a “trespassing problem.”

“The governments should respect and protect migration,” Maciel said.

News of the drownings, and the shocking photo, resonated in El Salvador among those considering heading north as part of what has been a surge of people from that country, Guatemala and Honduras fleeing poverty and violence.

In a Salvadoran chat group for people thinking about forming a migrant caravan — a phenomenon that drew the ire of U.S. President Donald Trump last year but has all but vanished after Mexican immigration enforcement started cracking down — members were having a raw discussion of the perils of the journey and whether it’s right for parents to bring children.

“If one goes there, they shouldn’t bring children, because going there is risking everything and a child is not prepared for that,” read one message, adding that minors should be left with loved ones back home.

“The thing is, it’s more likely that they give you help with children,” another person replied.

“But that’s only if they manage to arrive there … and that help should come when they are on the road. … But no, on the road there is no help for any child and there is where it’s most needed,” came the response.

Migration activists worry people may be driven to more risky measures by recent U.S. policies such as “metering” that dramatically reduce the numbers allowed to apply for refuge, as well as others that send asylum-seekers back across the border to wait in Mexico while their cases slog for months or even longer through a backlogged U.S. immigration court system. Wait lists for registering refugee claims with U.S. officials are in the thousands at some ports of entry.

Meanwhile, migrant shelters on the Mexico side are overflowing, and in places like Tamaulipas state, where Matamoros is located, cartels and gangs known to extort, kidnap and murder migrants are a major threat. /gsg