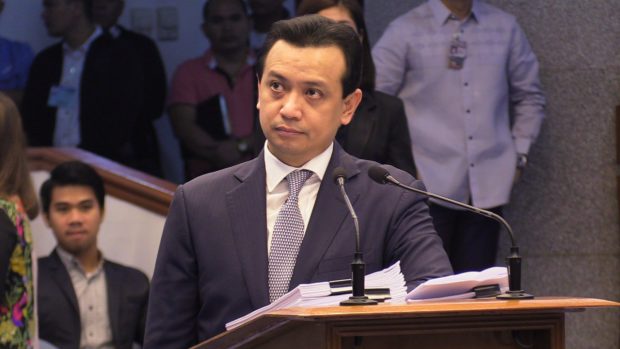 MANILA, Philippines — Outgoing Sen. Antonio Trillanes IV on Tuesday said that if incoming Sen. Imee Marcos was insinuating he was a bad person, she was showing too much hypocrisy.

“If the religious ritual is meant to help her fulfill her mandate as a newly elected Senator, then that’s a good thing,” Trillanes said in a statement. “But if she’s saying it to insinuate na masama akong tao, then sobrang ka-ipokritohan naman yun, even for a Marcos.”

[But if she’s saying it to insinuate that I’m a bady guy, then that’s too much hypocrisy, even for a Marcos.]

Trillanes made the remark after Marcos said she was planning to do a ritual at her new office, which was used by Trillanes during his term.

Trillanes is a staunch critic of President Rodrigo Duterte.

[I might call some Igorots, because the office will have to be blessed. I think I got Senator Trillanes’ office.]

ADVERTISEMENT
Read Next
Drivers told: Eyes on the road, hands on the wheel and not on your lover
EDITORS' PICK
COVID-19 has infected more than 69,000 people globally
COVID-19 screening checkpoints remain for those going to Boracay
Can travel make you fall in love?
The Najima Drive: Nissan’s MD drives #GoAnywhere adventures in new video series
Can Your Brand of Meat Be Trusted? Here’s How to Know You’re Eating Safe Meat
Xi’s early involvement in virus outbreak raises questions
MOST READ
WATCH: Sarah Geronimo dances ‘fierce’ version of ‘Tala’
2,000 iPhones given for free by Japanese gov’t to passengers stuck on ship due to coronavirus
Xi’s early involvement in virus outbreak raises questions
NBA loses ‘hundreds of millions’ in China over Hong Kong tweet
Don't miss out on the latest news and information.