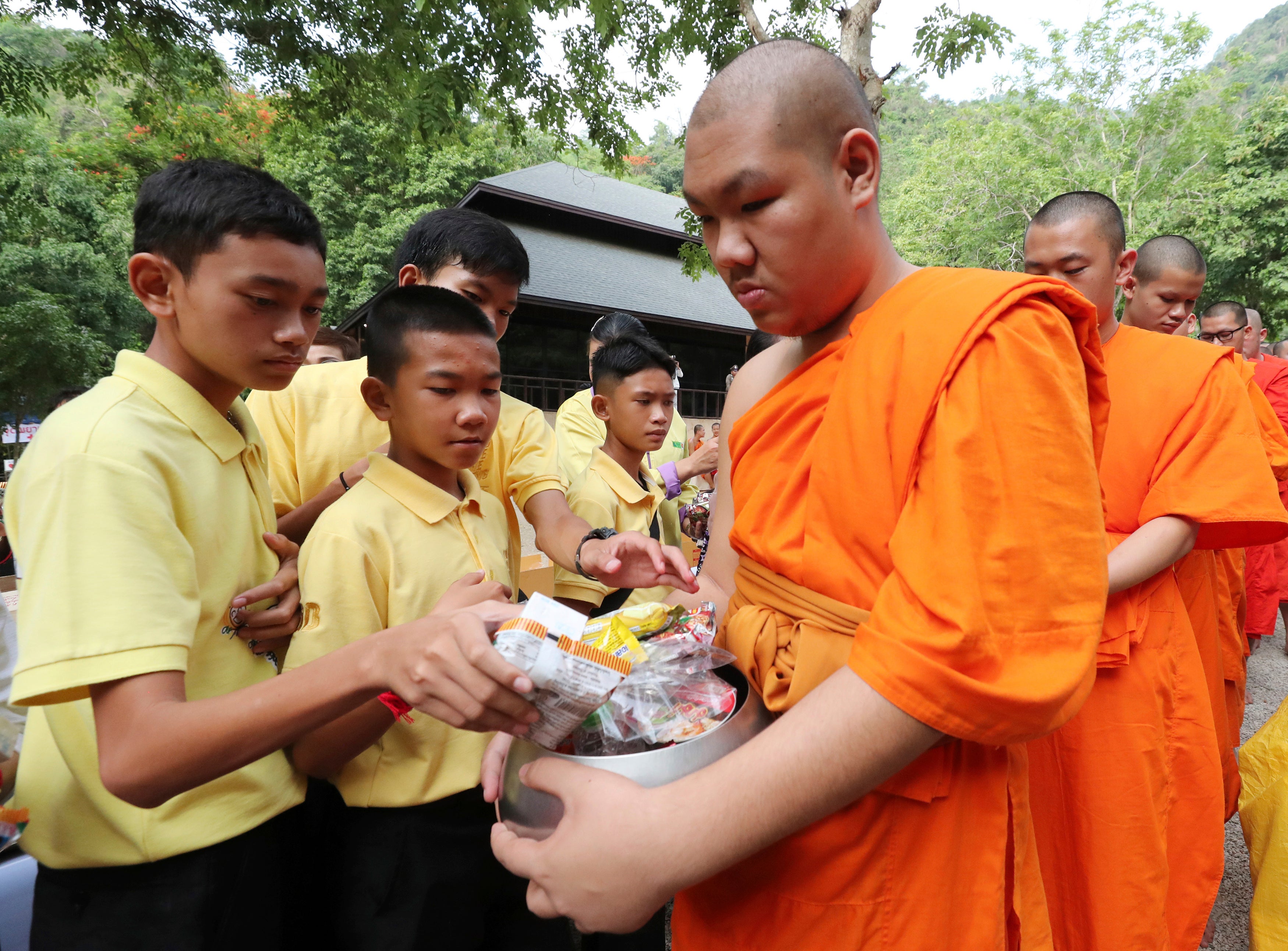 Members of the Wild Boars soccer team who were rescued from a flooded cave, offer foods to Buddhist monks near the Tham Luang cave in Mae Sai, Chiang Rai province, Thailand Monday, June 24, 2019. The 12 boys and their coach attended a Buddhist merit-making ceremony at the Tham Luang to commemorate the one-year anniversary of their ordeal that saw them trapped in a flooded cave for more than two weeks. (AP Photo/Sakchai Lalit)

MAE SAI, Thailand  — The 12 young Thai soccer players and their coach who grabbed global attention last year when they were trapped in a flooded cave for more than two weeks marked the anniversary of their ordeal with a religious ceremony Monday.

The boys who became known as the Wild Boars, their soccer club, took part in a Buddhist ceremony in which they gave food to monks to make merit. They then attended a news conference to talk about their lives over the past year.

Chanin Vibulrungruang, 12, the youngest of the group, said he now has tell his parents where he’s going every time he leaves his house.

“I already told my mom I was coming to this event,” Chanin joked. “My life has changed a lot since then because many people recognize me now.”

The boys and their coach entered the Tham Luang cave complex in far northern Thailand after soccer practice last June 23, leaving their bicycles and soccer cleats outside the entrance. Rising floodwater quickly trapped them inside, and when they didn’t return home a massive search was launched.

The boys spent nine nights lost in the cave, living on very little food and water, before they were found spotted deep in the twisting cave complex huddled on a patch of dirt above the rising water line. It was a moment captured on video and soon broadcast to the world.

It would be another eight days — until July 10 — before they were all safe. A team of expert divers guided each of the boys out of the cave on special stretchers. The operation required placing oxygen canisters along the path where the divers maneuvered dark, tight and twisting passageways filled with muddy water and strong currents.

The drama of the ordeal kept the world watching and the boys have since become celebrities.

“I want to say thank you to everyone who took part in saving all of our lives,” Ekapol Chantawong, the 26-year-old coach who led the boys into the cave, told reporters. “We promise that we’ll be good role models to society, and we also love everyone.”

Ekapol said most of the boys —now aged 12-17 — still dream of becoming professional soccer players, while some want to become Thai navy SEALs like those who took part in their search and rescue.

Monday’s news conference was the second of two days of events held to mark the anniversary. On Sunday, several of the boys, their coach and a number of the local and foreign divers took part in a bike ride and run to raise money to improve conditions at the cave.

The news conference was held at the Saman Gunan monument center, an art gallery erected near the cave to honor the fallen former Thai Navy SEAL who died while working on the search and rescue.

“This place is very important for us,” said one of the boys, Adul Sam-on, who turned 15 three days ago. “Partly because of Lt. Saman, who is like a second father to us. He was the one who helped us, and we need to remind ourselves that every day.”

Gunan’s widow, Valepon Gunan, said: “I believe that my husband is still looking over all of them.”

The day’s events were organized by the 13 Tham Luang Co. Ltd., a company that manages business opportunities stemming from the ordeal that was established with help from Thailand’s military government. All 13 survivors hold shares in the company with coach Ekapol acting as chairman.

Ekapol was asked about comments on social media that have criticized the group for seeking to profit from the crisis.

“Everybody’s entitled to their own opinions,” Ekapol said. “All we can do is find a way to live with it. In the end, it’s their right to think about us any way they want.”  /muf