HONOLULU – The National Transportation Safety Board on Monday called on the Federal Aviation Administration to tighten its regulations governing parachute operations after a skydiving plane in Hawaii crashed and killed all 11 people on board. 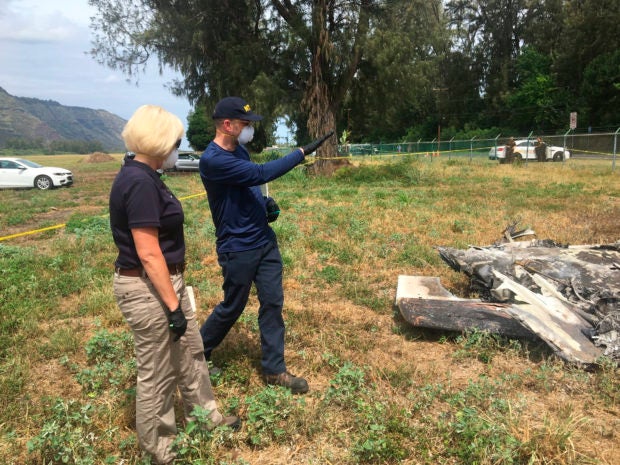 This Sunday, June 23, 2019, photo released by the National Transportation Safety Board shows NTSB investigator Eliott Simpson briefing NTSB Board Member Jennifer Homendy at the scene of the Hawaii skydiving crash in Oahu, Hawaii. No one aboard survived the crash, which left a small pile of smoky wreckage near the chain link fence surrounding Dillingham Airfield about an hour north of Honolulu. (National Transportation Safety Board via AP)

The NTSB recommended to the FAA more than a decade ago that it strengthen its rules on pilot training, aircraft maintenance and inspection, and FAA oversight, board member Jennifer Homendy told a news conference in Honolulu.

She said the FAA hasn’t acted on those recommendations.

“Are we trying to put the FAA on notice for this? Yes,” Homendy said. “We identified several safety concerns in 2008 with respect to parachute jump operations. Accidents continue to happen. There have been fatalities since that time.”

FAA spokesman Ian Gregor said he was reviewing the NTSB’s 2008 recommendations and FAA responses and could not immediately provide a comment.

The plane crashed Friday evening just inside the perimeter fence of an airfield on the north shore of Oahu island. Federal officials have said the plane crashed shortly after takeoff.

Homendy said FAA regulations for skydiving flights aren’t as stringent as those for air tours or commercial flights.

For example, she said parachute operators aren’t required to act on manufacturer service bulletins, which are similar to manufacturer recalls.

Homendy said there have been 80 accidents and 19 deaths involving skydiving flights since 2008.

Jordan Tehero, a budding videographer who fell in love with skydiving, was one of the crash victims.

The 23-year-old took up skydiving a few years ago as a distraction from the breakup of a relationship, his father, Garret, told The Associated Press.

Then his son “went and fell in love” with the sport, he said.

Autopsies have been completed, and all victims died of multiple blunt-force injuries from the crash, said Andrew Pereira, a spokesman for Honolulu Mayor Kirk Caldwell.

The plane was carrying skydivers from the Oahu Parachute Co., a North Shore business about an hour’s drive north of Honolulu.

The same plane sustained substantial damage to its tail section in a 2016 accident while carrying skydivers over Northern California. Repairs were then made to get the plane back into service, and those records along with inspection reports on the plane are part of the NTSB’s investigation.

Federal investigators flew to Hawaii to conduct the probe of the crash. They expect to release a preliminary report in about two weeks, but the final report — which will include the cause of the crash — could take up to two years to be released.

Garret Tehero lives on Kauai, where his son also lived.

Tehero said he spoke with his son the morning of the crash. The two had flown to Honolulu together, the father for business and Jordan for skydiving. 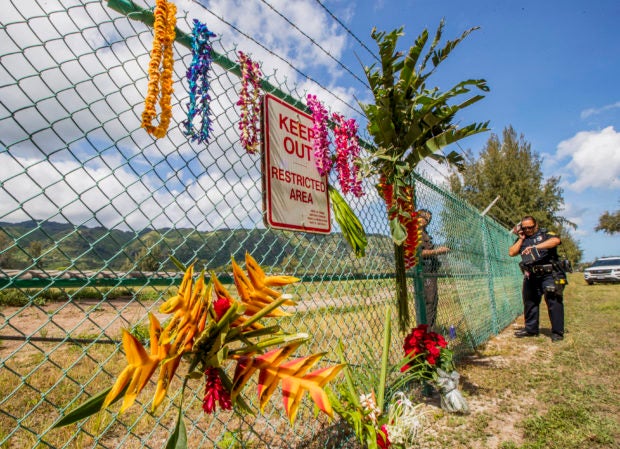 A memorial is seen at the site where a Beechcraft King Air twin-engine plane crashed Friday evening killing multiple people near the chain link fence surrounding Dillingham Airfield in Mokuleia, Hawaii. Police and sheriffs patrol the area. No one aboard survived the skydiving plane crash. The flight was operated by the Oahu Parachute Center skydiving company. (Dennis Oda/Honolulu Star-Advertiser via AP)

Jordan also worked as a security guard, and his employer wanted him to do some work in Honolulu on Sunday as well, so he decided to stay while his father went back to Kauai.

He said Jordan became interested in skydiving after he and a girlfriend broke up a few years ago.

“Sometimes people find a passion when they go through something, you know, that makes you want to take the mind off,” the father said. “He went and fell in love with it.”

Jordan’s parents both expressed worries over his new hobby.

“Because of our fear, we wanted him to stop,” the father said. “But he didn’t have the fear that we had, so he just continued.”

Any fears he may have had were taken care of with prayer. “He always told me, ‘Dad, I pray before every flight, before every jump I pray,’ ” the father said.

Friday’s crash was the most deadly civil aviation accident in the United States since a 2011 Reno Air Show wreck killed a pilot and 10 spectators in Nevada. /gsg