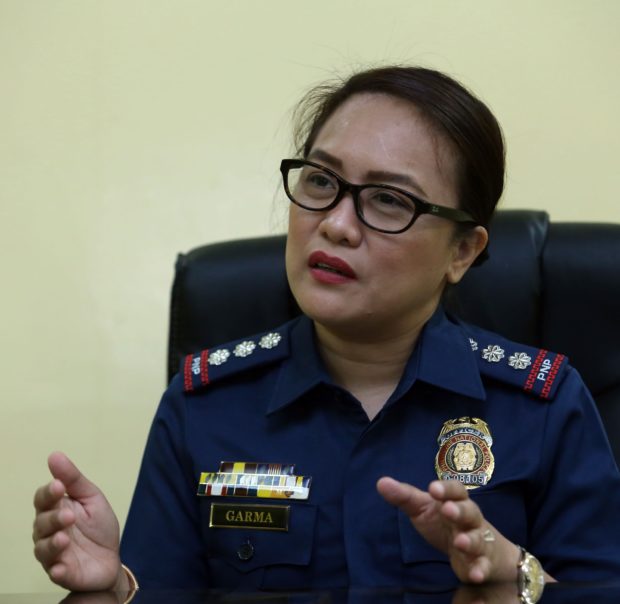 CEBU CITY, Cebu, Philippines — After more than 20 years of sleuthing, the city’s chief of police is retiring early to manage the scandal-rocked Philippine Charity Sweepstakes Office (PCSO) beginning next month.

Col. Royina Garma will assume the post of PCSO general manager the day after her retirement on June 30, replacing retired Marine Gen. Alexander Balutan, who quit in March amid allegations of corruption.

Garma, 45, the first woman to head the city police, would still have been eligible for 10 more years in police service.

“I have done my research. I know what are the pressing issues at PCSO,” she told a press conference on Monday. “I already have plans, but I don’t want to divulge it right now because it is still premature.”

President Rodrigo Duterte announced Garma’s appointment to the agency during last week’s command conference with the Philippine National Police and the Armed Forces of the Philippines in Malacañang.

The PCSO raises funds for the government’s health and medical assistance programs through lotteries.

Balutan, a member of the Philippine Military Academy Class of 1983, is a decorated veteran of military campaigns against Moro rebels in Mindanao. He was one of several retired military officers whom Mr. Duterte appointed to government posts after assuming the presidency on June 30, 2016.

Presidential spokesperson Salvador Panelo had announced that the President fired Balutan over allegations of corruption, the details of which were not divulged. But Malacañang later retracted this to say he had resigned and would be accorded a fair investigation.

Balutan, who assumed the PCSO post in September 2016, had hinted that he quit after powerful people in Malacañang and Congress wanted him “to do something [he] could not stomach.” He did not go into details.

His woes began when Sandra Cam, who sat on the PCSO board, accused him of throwing an extravagant Christmas party for the employees at a high-end hotel in 2017.

Balutan defended the P6-million expense as “very austere” compared with past Christmas parties. Besides, he added, the party was for the agency’s 1,500 employees from around the country.

Cam also accused him of unduly acting in favor of a company’s bid to be a Small Town Lottery agent, a charge he denied.

Balutan alleged that Cam wanted to head the PCSO so that her friend, Charlie “Atong” Ang, a former gambling buddy of then President Joseph Estrada, the outgoing Manila mayor, would have a hand in manipulating the lottery game system.

Garma said leaving the police organization “was a hard decision because I’ve been in the service for 24 years.”

“It is going to be an extremely different situation for me since I will be moving from public service to corporate world,” she said. —With reports from Benjie B. Talisic and Inquirer Research