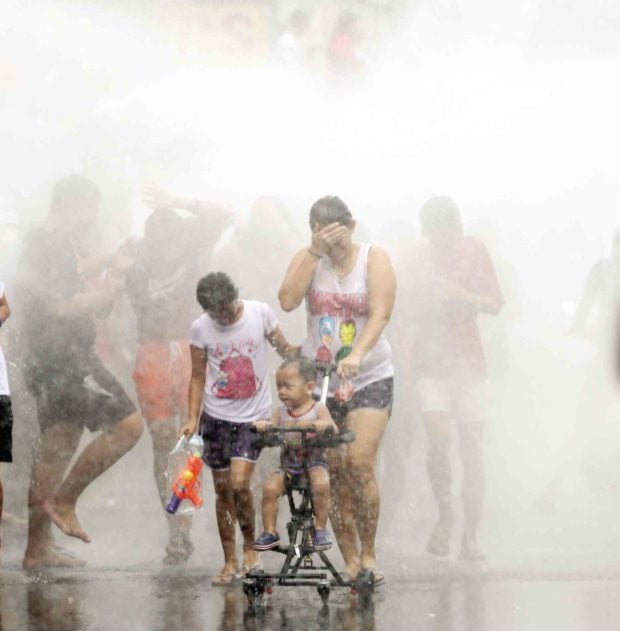 WHAT WATER SHORTAGE? This year’s Wattah Wattah Festival is believed to be the biggest yet, in terms of participants, since its launching in 2004. —NIÑO JESUS ORBETA

MANILA, Philippines — As the water level in Angat Dam tumbled on Monday to an alarming 159.43 meters—a harbinger of a possibly more severe water shortage in Metro Manila—there was little sense of an impending crisis in San Juan City, which went ahead with its annual Wattah Wattah Festival.

A procession of fire trucks rained a torrent of water on boisterous festival-goers, many of whom were grappling with dry taps at home. Still, it seemed little could dampen the city’s affinity for its traditional “basaan.”

“I think it’s the best celebration we’ve had,” Mayor Guia Gomez told reporters. The local government had limited the number of fire trucks to 16 from the usual 50 due to the water shortage.

Councilor Vincent Pacheco, the festival committee chair, estimated the crowd at around 12,000, making it the biggest Wattah Wattah yet despite the ironic backdrop of a worsening water crisis.

The chiefly religious festival is observed on the birthday of the city’s patron saint, John the Baptist. The fire trucks were blessed by a priest before these made their way through the small city, accompanied by several floats depicting the life of Saint John.

Encapsulating the view of other residents, Helen Cordial spurned the idea that the festival was a waste of resources. The dousing of water was akin to being showered with blessings, said the 49-year-old Cordial, who has lived in San Juan since the 1970s.

Dexter Cabreza, 24, said it was a family tradition to head to church before the basaan. According to Parks Garcia, who has celebrated the festival since its beginning in 2004, it was the city’s way of giving thanks to Saint John.

“It wouldn’t be right to destroy the tradition,” Garcia said.

Christy Ponclara, 35, said she could not abandon what was essentially a “celebration of our city.”

“I don’t [think] they’re wasting water because it’s once a year, and not even for a whole day,” she said. “We can’t get rid of this because it’s the only day for us to celebrate a simple fiesta of our city.”

Still, some residents were concerned about the appropriateness of pushing through with the festival although they agreed with the city government’s conservation measures this year.

Christine Sy, who has lived in San Juan for five years, said they were satisfied with the limit on the number of participating fire trucks.

Cancelation not an option

“I think it’s amenable, instead of not holding the event at all,” Sy added.

David Llaneta, who has joined the basaan for eight years, conceded that he “didn’t know” whether it was right to move ahead with the celebration this year. “But I guess [city hall] is finding a way to conserve water,” he said.

According to Pacheco, the city government has “turned the crisis into a positive instrument” by launching an awareness campaign on water conservation.

“We are thankful, not because there’s no water, but because the event was used to remind people that water is very important,” he said.