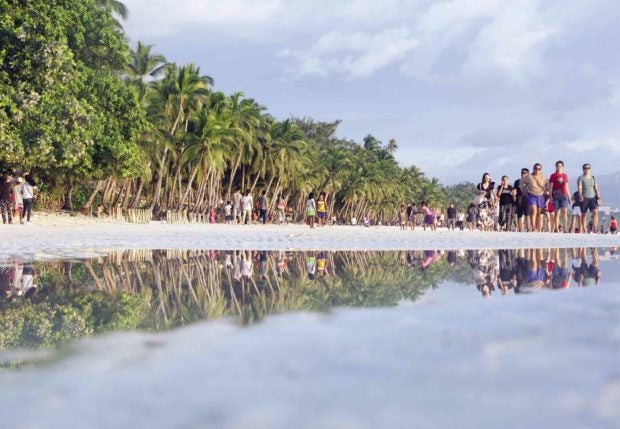 ILOILO CITY, Iloilo, Philippines — Owners of at least 20 buildings and their lessees in Boracay had been issued closure orders for violating the road easement rule and for lack of permits as the government continues the rehabilitation of the resort island in Aklan province.

Mayor Abram Sualog of Malay town said the closure order was issued to establishments with remaining overhang structures and those lacking mayor’s permit.

The protruding structures, he said, are connected to the roof or the upper levels of these buildings.

Structures that encroached on road easement, including those found in the upper floors, needed to be removed to ensure that the placement of electrical and other utility posts would not be impeded, local officials said.

But a building owner, who received a notice of closure, said the establishment had already been issued a notice of compliance following an inspection and measurement during the island’s closure to tourists last year. The owner, who asked not to be identified to avoid antagonizing local officials, said the BIARMG had insisted that the overhang still violated the road easement.

Structures along the main road of Boracay have been required to comply with the 12-meter easement when the island was closed to tourists on April 26, 2018, for a six-month environmental rehabilitation.

The upgrading and widening of the 20-kilometer road network on the island is one of the components of the rehabilitation, which President Duterte had ordered after he noted in a speech that Boracay had turned into a “cesspool” due to uncontrolled development and congestion. 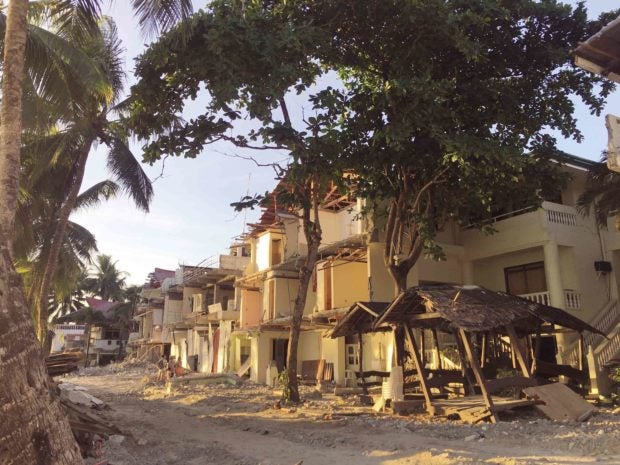 DEMOLISHED Sections of a beachfront hotel in Boracay are demolished over violation of easement rules as the government continues the environmental rehabilitation of the resort island in Malay, Aklan province. —ROBERT JAWORSKI L. ABAÑO

The road is designed to be 6 meters wide with a two-lane carriageway and 2-meter wide sidewalks. It will also feature loading and unloading bays, pavers, streetlights and vegetation.

Most building owners had demolished their structures encroaching on the easement but the remaining overhang structures needed to be removed, according to the BIARMG.

Sualog said building owners had been given 30 days to remove the protruding structure or face closure.

Others with pending applications for mayor’s permit were ordered to stop operation until they complied with requirements.

The local government in May closed 10 establishments, either ran by or were catering to Chinese and Koreans, for operating without business permits and clearances.