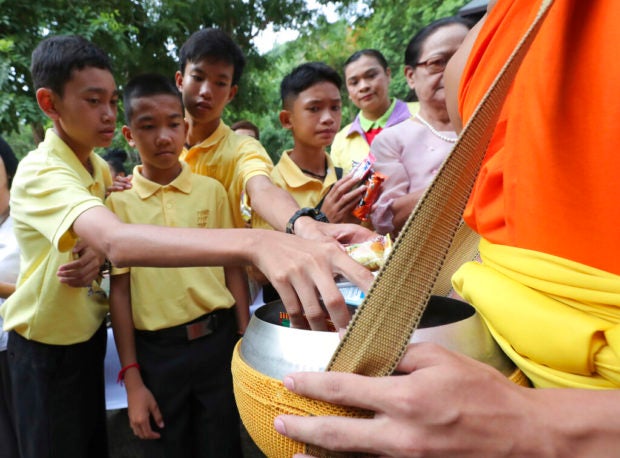 Members of the Wild Boars soccer team who were rescued from a flooded cave, offer foods to a Buddhist monk near the Tham Luang cave in Mae Sai, Chiang Rai province, Thailand on June 24, 2019. AP

MAE SAI, Thailand  — The 12 young Thai soccer players and their coach who grabbed global attention last year when they were trapped in a flooded cave for more than two weeks have marked the anniversary of their ordeal start with a religious ceremony.

The members of the Wild Boars took part in a Buddhist ceremony Monday before attending a news conference to talk about their lives over the past year.

Many of the boys — now aged 12-17 — say they still dream of becoming professional soccer players, while others say they want to become Navy SEALs like those who took part in their rescue.

The boys were lost in a cave in northern Thailand for nine nights before being found. It took another eight days for all to make it out safe. /ee