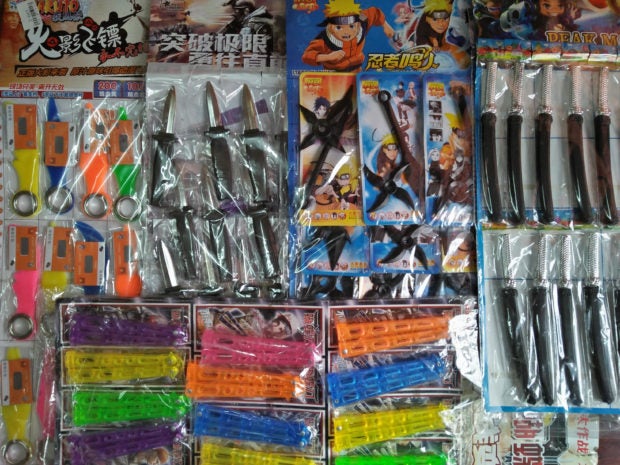 TOY WEAPONS This photo provided by EcoWaste Coalition shows that toy weapons the group bought in the streets of Divisoria in Manila. The group on Monday, June 24, 2019, warned parents and guardians against buying these type of toys.

MANILA, Philippines — A pro-environment and health group on Monday warned the public against buying toy weapons that pose danger to children.

The EcoWaste Coalition called out the sale of toy weapons that had sharp points and edges such fake “balisong” (fan knife) and hunting knife as well as “kunai” (dagger), “shuriken” (hand blade), and “tanto” (sword) apparently inspired from a popular Japanese cartoon series.

“Toys with sharp points and edges are potentially dangerous as these could tear a child’s sensitive skin or cause injury to a child’s eyes,” said Thony Dizon, Chemical Safety Campaigner of EcoWaste Coalition.

“Ninja weapon toys inspired by Naruto, a Japanese manga series, are attractive to young children who are fascinated by action heroes. However, some of these toys have pointed parts and sharp edges that can harm an unsuspecting child or his playmates,” he added.

The group said it bought the weapon toys on Sunday from toy retailers and wholesalers in Divisoria, Manila.

“These weapon toys are often sold to children for P5 to P10 each by ambulant vendors or toy shops near public elementary schools and in some neighborhood sari-sari stores,” the group said.

“While very affordable, the use of such toys could result to injuries requiring first aid treatment or medical attention and should, therefore, be kept out of children’s reach, the group pointed out,” it added.

Aside from accidental physical injuries, EcoWaste also warned parents and guardians against the impact of such toys on a child’s behavior. It said such type of toys may cause a child to develop an aggressive and violent attitude.

“For example, we find it totally inappropriate for young children to play with ‘balisong,’ which is often used in street altercations and crimes,” Dizon said.

“We strongly suggest to both parents and kids to pick safe toys that do not invite aggression or violence such as toy weapons,” he further said.

In buying toys, EcoWaste urged the public to ensure the safety of children and keep them away from aggressive and violent mindset by considering the following:

EcoWaste further urged parents and guardians to always choose toys and childcare items that are notified or registered with the Food and Drug Administration, which verify the quality and safety of products.

EcoWaste said it will soon conduct test buys of toys being sold outside public elementary schools to check on toy industry compliance to the newly-promulgated Implementing Rules and Regulations of Republic Act 10620, or the Toy and Game Safety Labeling Act. (Editor: Katherine G. Adraneda)