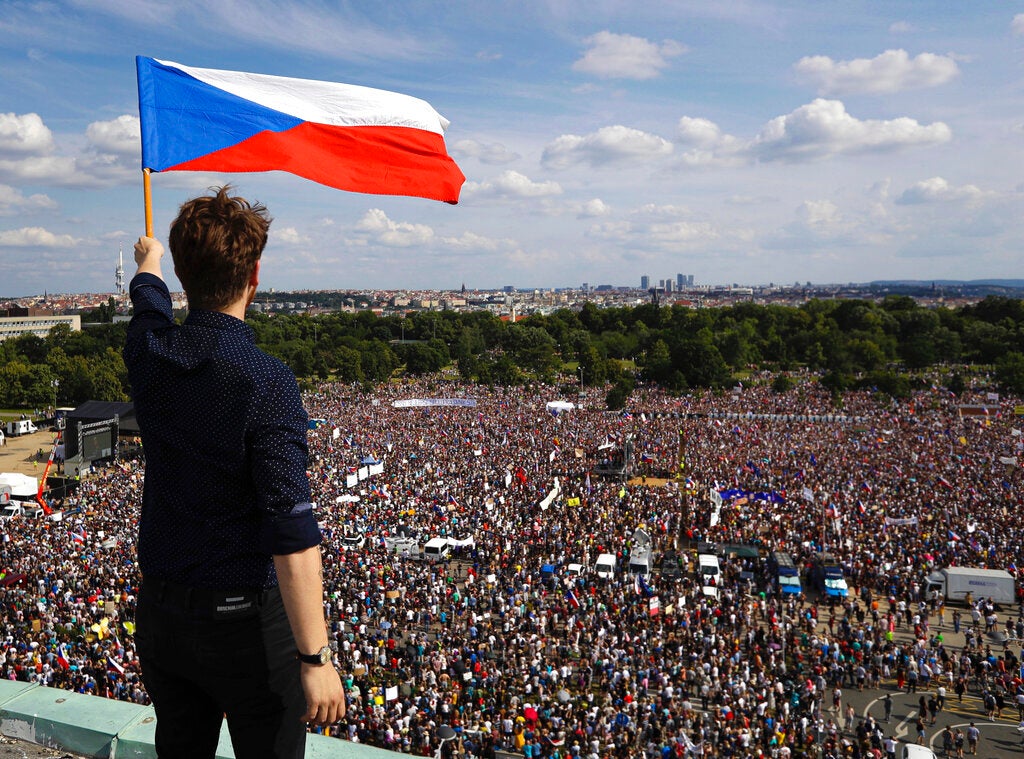 A man waves the Czech flag as people protest in Prague, Czech Republic, Sunday, June 23, 2019. Protesters are on calling on Czech Prime Minister Andrej Babis to step down over fraud allegations and subsidies paid to his former companies. (AP)

PRAGUE  — Hundreds of thousands of people rallied Sunday in Prague to urge Prime Minister Andrej Babis to resign, assembling from across the Czech Republic for the capital’s biggest anti-government protest since the 1989 pro-democratic Velvet Revolution that brought down the communist regime.

The demonstration at Letna Park, a site of massive gatherings that significantly contributed to the fall of communism in what 30 years ago was Czechoslovakia, was the largest from two months of street protests opposing Babis.

The protesters of 2019 said they didn’t come to overthrow the current political system but to defend it.

They consider Babis, a populist billionaire, as a threat to democracy, including the independence of the country’s legal system.

“We demand the resignation of Andrej Babis,” said Mikulas Minar, a student who put his studies on hold to help lead the recent demonstrations organized by a group called Million Moments for Democracy.

Babis has repeatedly said he has no reason to resign.

“It will likely be a long run,” another organizer, Benjamin Roll, told the crowd. “The current situation is unacceptable.”

Opposition to Babis has been fueled by the appointment of a new justice minister as prosecutors are deciding whether to indict Babis over alleged fraud involving European Union funds.

The protesters fear the new minister might undermine the independence of the Czech legal system, a threat that has brought the governments of Poland and Romania warnings from the European Union.

Justice Minister Marie Benesova is a close ally of Babis’ and voted against a police request to strip the prime minister of parliamentary immunity to face a criminal investigation.

A preliminary European Union report leaked in May concluded that Babis might have had a conflict of interest over EU subsidies involving his former business empire.

Babis denied wrongdoing and accused the EU of trying to destabilize the Czech Republic.

Besides demanding the prime minister and justice minister’s resignations, many of the demonstrators accused Babis and his key ally, President Milos Zeman, of undermining Czech politics and democracy overall.

Babis also faces allegations he collaborated with Czechoslovakia’s secret police before 1989, as well as criticism of his government’s power-sharing deal with the Communist Party.

“What is happening is more than we can tolerate,” said Dagmar Kratochvilova, a 60-year-old pottery maker who traveled across the country on a bus to reach Prague with others from the eastern city of Frydek Mistek.

The peaceful crowd chanted “Resign, resign,” and “We’ve had enough” while waving Czech and also European Union flags. “No Tolerance for Lies and Fraud,” read a banner unrolled by the demonstrators.

“I’m fed up with the government,” Natalie Bartkova, 18, a student from just south of Prague. “Babis seems to think that anything goes for him.”

Babis’ critics cited a new source of frustration, blaming him is for contributing to the inability of European Union leaders to agree on a plan to make the bloc’s economy carbon neutral by 2050.

The protesters announced another major protest at the same location for Nov.16 to commemorate the 30th anniversary of the Velvet Revolution.