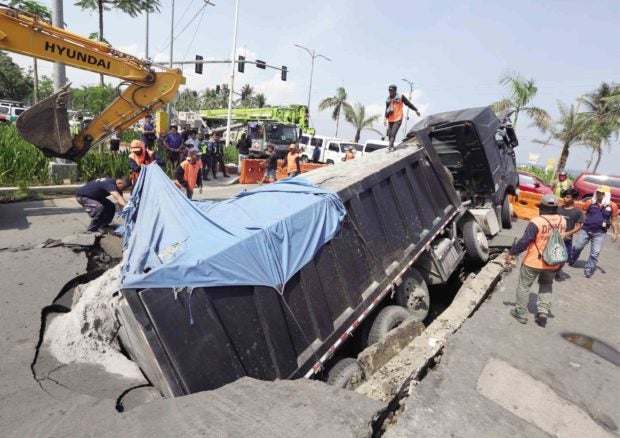 MANILA, Philippines — A dump truck transporting sand for the ongoing rehabilitation of Manila Bay sank into the ground after a portion of the road collapsed underneath the vehicle’s weight on Sunday.

The incident happened around 1:30 a.m. on the northbound lane of Roxas Boulevard corner Remedios Street in Manila.

Mikunug Macud, the Department of Public Works and Highways (DPWH) district engineer in the city, said the 14-wheeler driven by Michael Lagco weighed about 42 tons.

However, Remedios Street, a secondary road, could only accommodate 20 tons.

“The contractor [truck owner] committed a lot of violations. Two of them were exceeding weight or load limit, and passing through a secondary road when they know trucks are not supposed to be there,” Macud said in a phone interview.

He added: “It doesn’t mean that you can go scot-free when you’re working for the ongoing rehabilitation of Manila Bay, right?” On the front of the truck was a sign saying “Manila Bay Task Force.”

In a statement, the DPWH said it would conduct a probe of the incident to determine the cause and possible liabilities of the people who own the truck.

According to Macud, the portion of the road that collapsed was the part built over a double barrel box culvert, which served as one of the city’s main drainage systems.

He declined to give an estimate of the cost of damage, saying he would leave it to DPWH structural engineers.

The DPWH said the double barrel box culvert on Remedios Street was constructed in the 1970s.

Macud, who has been with the DPWH south Manila since 1981, said that portion of the road had never been repaired.

Based on his initial assessment, the drainage itself was not damaged, only its cover.

At the time of the incident, the road was closed to give way to a fun run.

But Macud said it was not clear why the truck driver passed through that side of the road when they were allowed on the northbound lane of Roxas Boulevard.

“He could have just simply asked the police to let him pass,” he added.

DPWH assistant district engineer Ernesto Leones called the area a “drainage main.” Both he and Macud denied earlier reports that the collapse was caused by a sink hole or soil erosion.

“No, no. There’s no such thing,” Leones said in a separate phone interview, adding: “That’s the biggest drainage system discharging water to Manila Bay. That’s why there’s water underneath.”

Felix Abad, head of the Manila Disaster Risk Reduction and Management Office, earlier said that there was plenty of water under the pavement.

In an interview, Abad said that based on what he saw, what happened was a form of “soil erosion.” “The sea eroded the earth” was how he described it.

Macud said they would file charges against the contractor. —With a report from Tina G. Santos