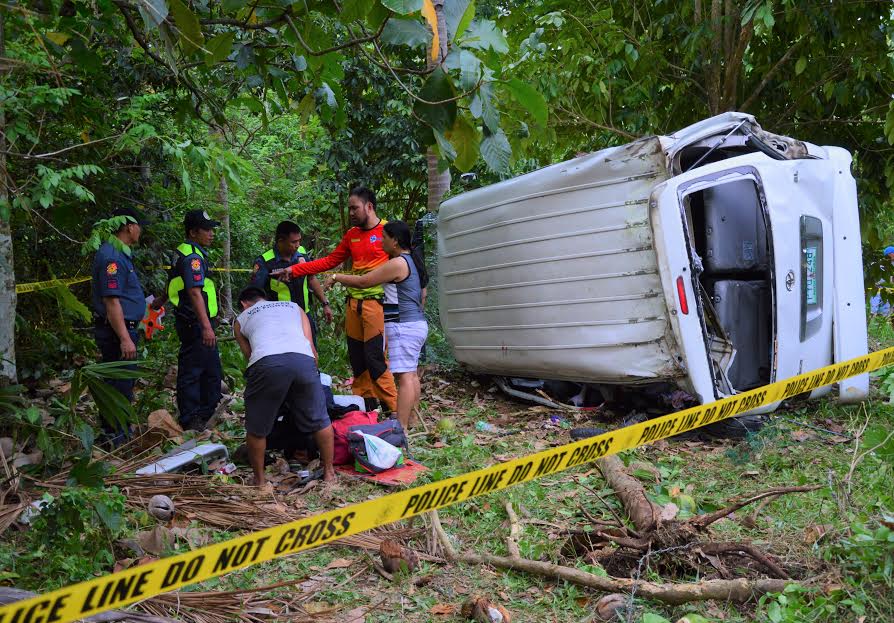 Officers from the Mambajao Police Municipal Station in Mambajao, Camiguin, check the site of the van that figured in an accident in said town late Saturday afternoon. Three passengers were killed in the crash. (Jigger J. Jerusalem)

MAMBAJAO, Camiguin – Three call center workers were killed and 11 others were injured in a vehicular accident in a village here late Saturday afternoon, June 22, police said.

Due to the impact of the crash, three of the passengers died on the spot, Bahian said.

He said that most of the ten other persons onboard the van sustained serious injuries. The van’s driver, Joy Sobremisana, had minor injuries, he added.

“All passengers were immediately evacuated and brought to the provincial hospital by the Mambajao responders,” he said.

Based on the police’s  initial investigation, the van’s brakes malfunctioned as it went downhill, causing it to crash into an open field.

Captain Arnold Gaabucayan, Mambajao municipal police chief, said most of the van’s passengers are employees of IBEX Global Davao, who were in Camiguin for their company team-building activity.

The rest of the passengers were loved ones and family members of the call center company’s workers, he said.

Gaabucayan said the group arrived in Camiguin on Saturday morning and toured for a bit before proceeding to the Saay cold spring in Poblacion.

“They have no guide. Their plan upon arriving was to go to the White Island but since it was already afternoon, they decided to go to Saay,” he said.

The police chief added that they did not stay long at the cold spring. They were en route to the town center when the van’s brakes suddenly failed, he said.

Those who died in the accident were identified by the Mambajao police as Julie Ann Mae Olive, Jovert de Asis, and Ian Jumahalili.

Gaabucayan said some of the families of the victims have already been notified. (Editor: Julie Espinosa)