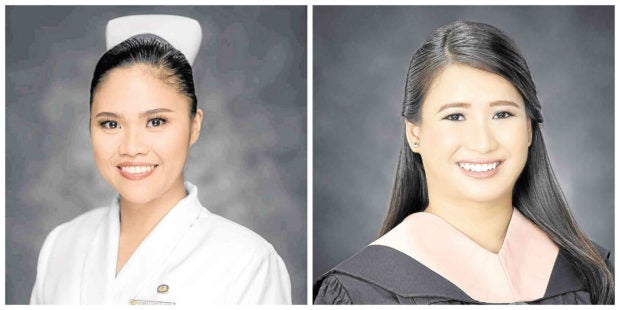 Such was their bond as best friends that Almira Louise Olete Hinsoy, Dennise Kim Marie Bulquiren Luig and Thomas Benroe Tallodar Supeña—all graduates of West Visayas State University College of Nursing (WVSU CON)—must have shared the same study habits and thought process to be able to clinch the first, second and seventh rankings, respectively, in the 2019 Nurse Licensure Examination (NLE) whose results were released on Friday.

Nine others from Batch Phoenix of WVSU-La Paz district also placed in the top 10.

Tying with Hinsoy for the top slot in the NLE was Jeremiah Paula Austria Caceres from Angeles University Foundation (AUF), a consistent scholar who, like Hinsoy, got a rating of 87.40 percent.

Recalled Luig: “It was sometimes difficult to wake up every day at 6 a.m. and even 3 a.m., to prepare for our daily reviews. But we were each other’s cheerleader and alarm clock.”

Although Hinsoy, Luig and Supeña would occasionally study together, they spent most of their time at review classes with fellow batchmates at WVSU CON, where landing in the Top 10 was a constant concern.

After all, a WVSU CON graduate ranked first in the NLE in 2017, while several other graduates made it to the top 10. The college has registered a 100-percent passing rate every year except in 2017, when the rate slipped to 99 percent.

“The days of review were hectic,” recounted Hinsoy. “We needed to be at school earlier than the usual 8 a.m. class … Some of us would go to school at 2 a.m. and wait for the school gate to open just so we could get front seats.”

Luig said she and Hinsoy would probably take a break before proceeding to Medicine. Supeña remains undecided about his next career move.

“I remember the first time I dreamt of becoming a nurse. I was in Grade 1 and thought it was all about wearing white uniforms and a cap, carrying the patients’ charts, regulating their IV, giving meds, taking vitals signs and nothing more. I entered WVSU thinking my college life would be chill because Nursing has no math subjects and Fridays will be free days.  But my fantasies were cut short on the first day of class. We had Saturday classes, Algebra in first year and Pharmacology in second year,” she recalled.

“College life was never easy but every tear, failure and sacrifice was worth it,” Hinsoy said.

As for Caceres, the question of where to go from here remains unanswered.

“I may start serving my country first until I decide whether I would continue my studies and become a doctor, or take my master’s,” she said.

Most aspiring nurses end up studying the health care environment “to determine what course to take [after] weighing the advantages and disadvantages,” she added.

The government, Caceres said, has now focused its resources on building better health care through the universal health care program.

But while patients are fully subsidized, “the government must also focus soon on the benefits and salaries of the health care system’s manpower,” said this topnotcher whose older brothers are nurses themselves.  Aaron Cyril, the eldest, works in Manila, while Jan Isaiah has taken a nursing assignment in Abu Dhabi.

Like Hinsoy, Caceres said the news that she had topped the NLE had yet to sink in.  Her friends and relatives seem happier than she is about it, she added.

Even her parents were surprised about the results, “because days before the exam, they kept reassuring me that simply passing it was an accomplishment.”

“I guess they didn’t want to pressure me,” Caceres shrugged.