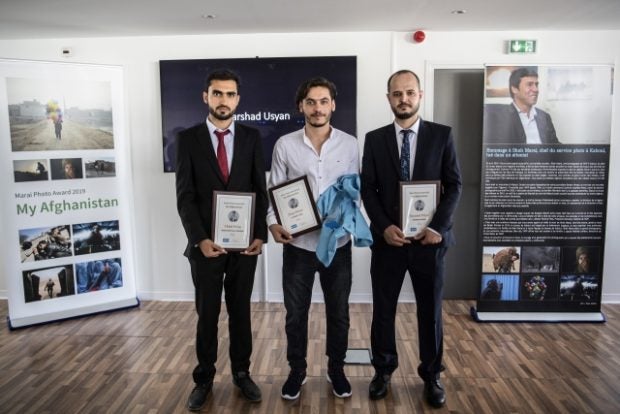 Three Afghan photographers who won the first three places in the inaugural prize in memory of AFP’s chief Afghanistan photographer Shah Marai, expressed hope Friday their awards would encourage others from the country.

Farshad Usyan in first place, with Hoshang Hashimi second and Mohammad Anwar Danishyar third picked up their prizes in the “My Afghanistan” awards at a ceremony at AFP headquarters in Paris.

Usyan, 26, a freelance photographer from the northern city of Mazar-i-Sharif who regularly collaborates with AFP, said he had never expected to even become a photographer.

“I was just a student, I had no idea about photography,” said Usyan, a former medical student who took up the profession following a call from Marai when his brother, also an AFP photographer, died.

“I did not know about professional cameras, how to turn it on,” he said.

Recalling Marai, he said: “I wish he was here. But I know he is proud of me. He was my close friend at a personal and professional level.”

Usyan won first prize for a series of photos entitled “The Pacifist” showing unexpected scenes such as Afghan women laughing in a 3D cinema.

“This award can help Afghan photographers show Afghanistan better to the world,” said second-placed Hashimi, 30, from the western city of Herat.

Hashimi was acclaimed for photos showing the ups and downs of daily life under the title “Afghan Life in the Middle of Conflict.”

Marai, AFP’s chief photographer in Afghanistan, was among 25 people killed along with eight other journalists in a bomb attack on April 30, 2018.

Less than three months later AFP driver Mohammad Akhtar was killed in another suicide attack on his way to work.

Akhtar was the third member of the AFP bureau in Kabul to die in a militant attack since 2014, when reporter Sardar Ahmad was killed along with his wife and two of his children in a Taliban raid on a hotel.

The deaths of the AFP staff have shown the perilous dangers that Afghan media workers are exposed to on a daily basis.

But Marai, 41, had always looked to show all aspects of Afghan society, and not just conflict, through his photographs, proving an inspiration to a new generation of photographers.

He had worked for AFP since 1996, covering rule by the Taliban and then the US-led invasion in 2001.

Danishyar, 21, a freelancer from Jalalabad in eastern Afghanistan, came in third with “Bricks to Blackboards” which show the labor carried out by families dependent on rich owners of open-air brick factories

He emphasized that Marai would never be forgotten.

“We can never forget April 30, it was a very sad day for us,” Danishyar said. “He was a great photographer and icon for Afghan photographers.”

But he added: “It will not stop us from telling stories about our country.” NVG

Philippines among worst countries for journalists in Southeast Asia — IFJ