New drug to boost women’s sex drive approved in US 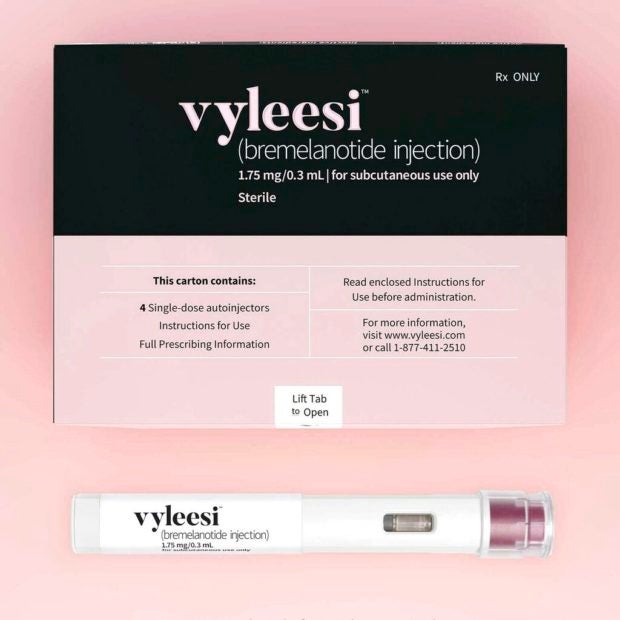 This image provided by Amag Pharmaceuticals in June 2019 shows packaging for their drug Vyleesi. The medication OK’d Friday, June 21, 2019 by the U.S. Food and Drug Administration is only the second approved to increase sexual desire in a women, a market drugmakers have been trying to cultivate since the blockbuster success of Viagra for men in the late 1990s. (Amag Pharmaceuticals via AP)

WASHINGTON — Women in the United States will soon have another drug option designed to boost low sex drive: a shot they can give themselves in the thigh or abdomen that raises sexual interest for several hours.

The medication OK’d Friday by the Food and Drug Administration is only the second approved to increase sexual desire in women, a market drugmakers have been trying to cultivate since the blockbuster success of Viagra for men in the late 1990s. The other drug is a daily pill.

The upside of the new drug “is that you only use it when you need it,” said Dr. Julia Johnson, a reproductive specialist at UMass Memorial Medical Center who was not involved in its development. “The downside is that it’s a shot — and some people are very squeamish.”

The drug’s developer, Amag Pharmaceuticals, could also face some of the same hurdles that have plagued the lone pill previously approved for the condition, including unpleasant side effects and limited insurance coverage. The company declined to release price information.

The FDA approved the new drug, Vyleesi (pronounced vie-LEE’-see), for premenopausal women with a disorder defined by a persistent lack of interest in sex, causing stress. The most common side effect in company studies was nausea. The approval was based on women’s responses to questionnaires that showed increases in sexual desire and decreases in stress related to sex. The women didn’t report having more sex, the original goal for the drug.

Flushing, injection site reactions and headache are other common side effects.

Because so many factors affect sexual desire, doctors must rule out other causes before diagnosing the condition, including relationship issues, medical problems and mood disorders. The condition, known as hypoactive sexual desire disorder, is not universally accepted, and some psychologists argue that low sex drive should not be considered a medical problem.

Still, the pharmaceutical industry has long pointed to surveys — some funded by drugmakers — suggesting that it is the most common female sexual disorder in the nation, affecting roughly 1 in 10 women. Amag estimates nearly 6 million U.S. women meet the criteria for the drug.

Cynthia Pearson, executive director of the National Women’s Health Network, urged women to avoid using the drug “until more is known about its safety and effectiveness.” She noted in a statement that Amag had not yet published full clinical trial results.

The search for a pill to treat women’s sexual difficulties was once a top priority for many of the world’s biggest drugmakers, including Pfizer, Bayer and Procter & Gamble. Those companies and others studied and later abandoned drugs acting on blood flow, testosterone and other targets.

Vyleesi acts on receptors for a brain-stimulating hormone called melanocortin, which is associated with sexual arousal and appetite in both men and women.

Waltham, Massachusetts-based Amag plans to pitch the drug to consumers through social media, including a website called unblush.com that tells women that low sex drive “is nothing to blush about.”

Amag’s campaign has some of the hallmarks that helped launch the first female libido drug, Addyi, a once-a-day pill approved in 2015. The FDA decision followed a contentious four-year review that included a lobbying effort funded by Addyi’s maker, Sprout Pharmaceuticals, which framed the lack of female sex drugs as a women’s rights issue.

Women taking Addyi showed a slight uptick in “sexually satisfying events” per month and improved scores on psychiatric questionnaires. Those results were only slightly better than what women taking a placebo reported, but they were significant enough to meet FDA effectiveness standards.

The pink pill — originally developed as an antidepressant — was ultimately approved with a bold warning that it should not be combined with alcohol, due to risks of fainting and dangerously low blood pressure.

Most insurers refused to cover the drug, citing lackluster effectiveness, and many women balked at the $800-per-month price. Last year, Sprout slashed the price to $400. It was prescribed just 6,000 times last year, according to investment analyst data.

UMass’s Johnson said drugs should not be the first choice for treating women’s sexual problems. Instead, she recommends counseling to help women “separate all the stresses of life” from their sex life.

“But if that doesn’t work, having a medication that may help is worth trying,” she said. /jpv