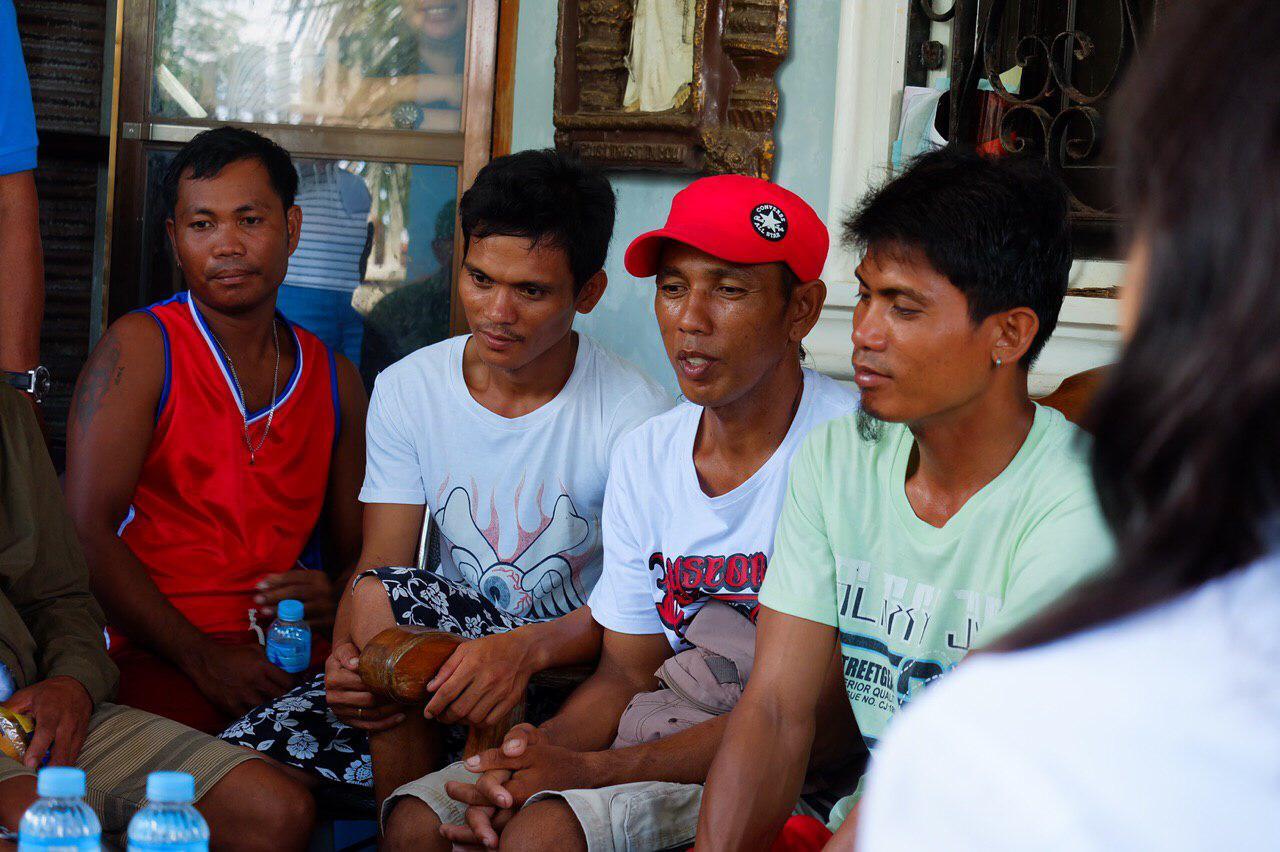 In this photo, Vice President Leni Robredo talks to the so-called Recto Bank 22 when she visited them in Occidental Mindoro on June 21, 2019. (Photo from OVP)

CALAPAN CITY, Philippines – A network of civil society organizations remains in solidarity with the 22 fishermen from San Jose town in Occidental Mindoro who figured in an incident with a Chinese trawler in Recto Bank at the West Philippine Sea.
“The fisherfolk sector provides food in our table, with the farmers, they are the backbone of our society. Yet, they are among the poorest of the poor. Government should protect them because without them the whole nation will go hungry,” said the Philippine Misereor Partnership, Inc. (PMPI) in an emailed statement.
PMPI, a network of civil society organizations, rights groups, peace and faith-based institutions, expressed disbelief and disgust over the position and standpoints issued by the Philippine government regarding the “ramming and sinking” of F/B Gem-Vir by the Chinese vessel in the disputed sea.
The group cried “foul” at the seeming harassment through indirect bribes and intimidation by government leaders and the dismissive statements on the claims of the fisherfolks who said a Chinese vessel rammed and sunk their vessel midnight of June 9.
“These actions show the world that it is ready to submit to China and lose whatever dignity we have as a people,” said PMPI.
“What have become of our leaders? The fainthearted responses dashed the remaining hopes of the fisherfolk, is seeking to claim justice over the boat ramming incident,” PMPI added.
The network added:  “China should be held accountable for the June 9 mishap, because whether the ramming was accidental or intentional, under the United Nations Convention on the Law of the Sea (UNCLOS), those who are in distress at sea should be rescued, which the Chinese vessel failed to do.”
Since it happened within Philippine territory, the captain of the Chinese vessel and its crew should be litigated under Philippine laws, the statement said.
PMPI demands “for an immediate, independent impartial investigation of the mishap to determine the accountability of the Chinese vessel together with its government.”
The group said that the Philippine Navy and the Maritime Industry Authority should “be fair and bring forth an unbiased report of the mishap” as it calls on the Senate to “do an independent inquiry to this incident.”
It called on all Filipinos to “push government to uphold our sovereignty and stop kowtowing to the whims, caprices and arrogance of the Chinese government.”
The group also thanked the Vietnamese vessel who rescued the Filipino fishermen.
“We apologize that the action of our government to distort the truth and caused them to appear that they too are lying. We ask the international community, particularly our Asian brothers who have rejected the Chinese in many ways and forms to continue to be our friends and stopping China from its imperialistic actions”, said the PMPI. , @mvirolaINQ, Inquirer Southern Luzon
ADVERTISEMENT
FEATURED STORIES
NEWSINFO
’Pepito’ prompts suspension of some classes, work on Wednesday, Oct. 21
NEWSINFO
Velasco says he was ‘ostracized’ during Cayetano leadership
NEWSINFO
Chinese arrivals since 2017 higher than QC population — Hontiveros
Read Next
Parents of UK militant in Syria spared jail for sending cash
EDITORS' PICK
Grand Hyatt Manila all set to welcome back guests
Smart brings KCON:TACT 2020 Season 2 to Filipino fans
Boy Bondat: Siomai King’s newest innovation
Storm sends Mayon lahar blocking roads in Albay town
’Pepito’ prompts suspension of some classes, work on Wednesday, Oct. 21
‘Pepito’ slightly intensifies as it makes landfall over Aurora
MOST READ
’Pepito’ prompts suspension of some classes, work on Wednesday, Oct. 21
Velasco says he was ‘ostracized’ during Cayetano leadership
I was an activist, says Baguio-born PNP chief
Chinese arrivals since 2017 higher than QC population — Hontiveros
Don't miss out on the latest news and information.