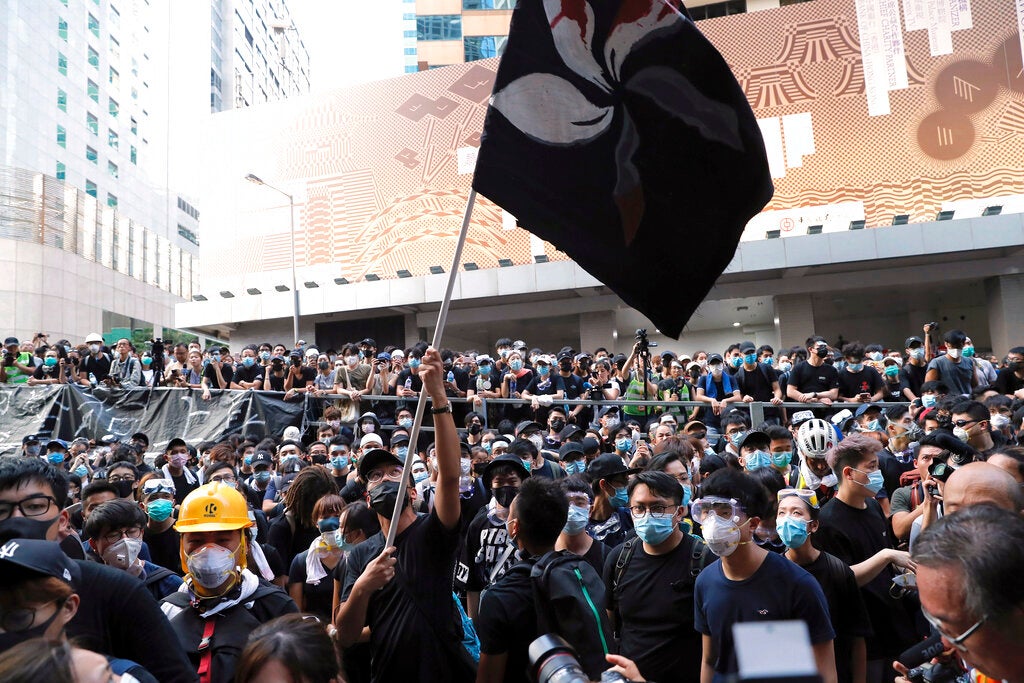 HONG KONG — Protesters in Hong Kong besieged police headquarters late into the night Friday, throwing eggs at the building and drawing graffiti on the walls, before ending a day of demonstrations in the Asian financial center with their demands unmet.

By daybreak Saturday, police had cleared the streets of barriers set up by protesters to snarl traffic in the Asian financial center, and only a few groups in the mostly youthful crowd remained. Many slept outside the Legislature.

Some demonstrators said in TV interviews that they had made their point but were disappointed that neither the police nor government leaders had come to talk to them.

Hong Kong has been rocked by major protests for the past two weeks over legislative proposals that many view as eroding the territory’s judicial independence and, more broadly, as a sign of Chinese government efforts to chip away at the freedoms of the semi-autonomous city.

Hong Kong leader Carrie Lam indefinitely suspended debate on the bills a week ago, making it likely they would die. But protesters are demanding that she formally withdraw the proposed changes to the extradition laws. Some also want her to resign.

The peaceful ending to Friday’s protests drew a sigh of relief in the city of 7.4 million people, after police unleashed tear gas and rubber bullets last week in violent clashes with protesters that left dozens injured on both sides.

Police were previously criticized for their use of force but this time waited out the protesters. Police did issue a statement at 4:50 a.m. condemning them for blocking key streets and seriously disrupting work at police headquarters.

“Police have shown the greatest tolerance to the protesters who assembled outside PHQ, but their means of expressing views have become illegal, irrational and unreasonable,” the statement said in part.

Activist Joshua Wong called on police to answer demands over heavy-handed tactics used during a mass protest on June 12, including the firing of 150 rounds of tear gas, rubber bullets and beanbag rounds, and the beating of unarmed protesters by police with truncheons.

“We … urge police to apologize to the people” over the use of such tactics and their labeling of the gathering as a riot, Wong said.

While anger seemed to be turning away from civil authorities and toward the police, the mostly black-clad protesters continued to try to shut down the entire government complex, as they have tried off-and-on for the past two weeks.

During the afternoon, some sought to build barriers on Connaught Road, the main thoroughfare in the area known as Admiralty, building barriers of stones, pylons and other materials at hand, at one time temporarily blocking in a police van.

The auxiliary bishop of Hong Kong’s Catholic diocese, the Rev. Joseph Ha, appealed to the protesters to avoid violence. He warned that public opinion could turn against them.

“You have already been on the roads for a long time,” he said on Cable TV Hong Kong. “You’ve already done a lot. You have already expressed very clearly your hopes and wishes. But I am really worried about your personal safety. … Please, absolutely, do not use violence.”

Protest leaders have said they are determined to keep up the pressure on Lam, who has insisted the bills are needed to uphold justice. But critics see them as part of a campaign by Beijing to diminish Hong Kong’s democratic institutions.

“I myself am not the type to get involved in violence,” student protester Brian Chow said. “I’ll just carry on sitting here, sing some Christian hymns, show our resistance, and keep the government paralyzed until it responds to us.”

Many protesters have been wary of giving their full names and some have obscured their features with facemasks to guard their identities against potential retribution from government or school authorities.

Government offices were ordered closed Friday “due to security considerations,” and hearings at the Legislative Council were suspended.

Since the confrontations June 12, police have eased their approach, hoping to avoid a replay of 2014 protests, when officers unleashed 87 rounds of tear gas at protesters in the same location as the current protests.

When the smoke from that response cleared, bigger crowds returned, angrier than before, and didn’t leave for nearly three months.

The bills would expand the scope of criminal suspect transfers to include mainland China, Taiwan and Macau. Legal and business groups in Hong Kong oppose the legislation, saying critics of China’s ruling Communist Party would be at risk of torture and unfair trials on the mainland and that it further chips away at the “one country, two systems” framework under which Hong Kong has been governed since 1997.

That framework guaranteed the territory the right to retain its own legal, economic and political system for 50 years, but the Communist Party under Chinese President Xi Jinping has been pushing ever more aggressively to quiet independent voices in Hong Kong. Beijing has squelched all reporting on the protests in mainland media and accused foreign forces of stirring up disturbances in Hong Kong.

Opposition to the legislation has come from a broad range of civic, human rights, legal profession and commercial organizations.

On Friday, the Hong Kong Bar Association reiterated is criticisms, saying Lam’s decision to suspend but not withdraw the bill was “wholly unsatisfactory” because it could still dictate the parameters of future consultation on the issues of surrender of fugitives and cross-border legal assistance.

The association also called for the setting up of an independent commission to investigate the June 12 violence, including whatever guidelines existed on the use of force by police against demonstrators.

Amnesty International went a step further, saying police must “end the unlawful use of force against peaceful protesters,” and issuing a report documenting 14 incidents of apparent police violence on June 12.

Officers appeared “out of control, placing peaceful protesters who posed no threat in danger of serious injury,” Man-kei Tam, the group’s Hong Kong director, said in a statement.

Metro Manila likely to shift to MGCQ by end-May, but with ‘localized lockdown’