Del Rosario says he notified DFA about use of diplomatic passport 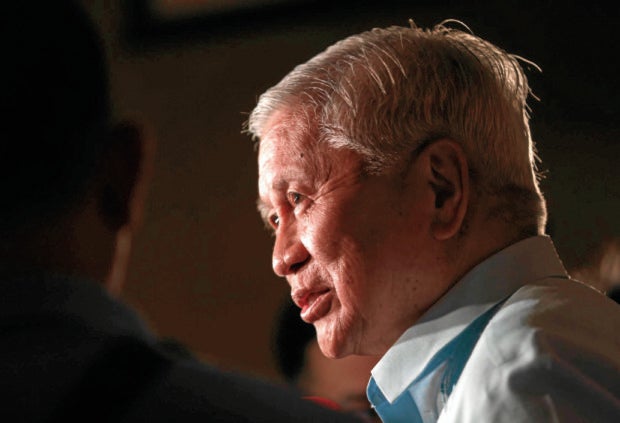 MANILA, Philippines — Former Foreign Affairs Secretary Albert del Rosario said he earlier notified the Department of Foreign Affairs (DFA) that he would be using his diplomatic passport for his business trip to Hong Kong.

“Before I went to Hong Kong, I wrote [to] the DFA that I was going to be traveling on business and would be using a diplomatic passport,” Del Rosario told reporters at the Ninoy Aquino International Airport (Naia) Friday afternoon.

“So they took that information and they gave it to Hong Kong, the consulate. The Hong Kong consulate wrote a letter to the Hong Kong authorities or whether they had received it,” he added.

His statement came after government officials questioned his use of diplomatic passport for traveling overseas.

Citing Philippine Passport Act of 1996, Senator Vicente Sotto III said that the issuance of a diplomatic passport does not include former Cabinet secretaries.

Under the law, the diplomatic passport may be used for “official mission or official travel.”

However, Del Rosario said that the senator’s statement was “not correct.”

“He (Sotto) should consult to the DFA (Department of Foreign Affairs) because that’s not a correct statement,” the former foreign affairs chief said.

Presidential Spokesperson Salvador Panelo, meanwhile, said Del Rosario “may have misused” his diplomatic passport, claiming that the latter’s trip is “private in nature” and not sanctioned by the Philippine government.

“Mr. Del Rosario may have misused a diplomatic passport in his travel to Hong Kong, a trip which is private in nature and is in no way related to government or foreign service,” Panelo said in a statement.

READ: Palace: Del Rosario may have misused a diplomatic passport

“As the country’s former Chief Diplomat, Mr. Del Rosario should have known or have been alerted to the proper use of diplomatic passports and other travel documents,” he added.

When Del Rosario arrived at 7:40 a.m. on Friday, he was held by immigration authorities at the Hong Kong International Airport (HKIA) for around six hours “despite using a Philippine diplomatic status passport.”

He was supposed to attend meetings of First Pacific’s board and shareholders in Hong Kong but was barred from entering the country.

Del Rosario was one of the two former top Philippine government officials who filed a communication against Chinese President Xi Jinping before the International Criminal Court (ICC) last March.

Former Ombudsman Conchita Carpio-Morales, his co-complainant, went through a similar ordeal in Hong Kong last May 21 when she was held by immigration officers for being “a security threat.”

Carpio-Morales, who was with her family for a vacation at the time, was later allowed to enter Hong Kong but she opted to return to Manila.