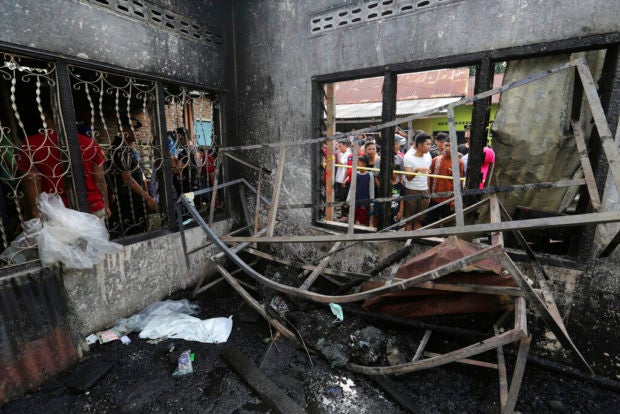 Residents examine the damage after a fire razed through a match factory in Langkat, North Sumatra, Indonesia on June 21, 2019.  AP

MEDAN, Indonesia — At least 30 people were killed in a fire that swept through a house that doubled as a match factory in Indonesia’s North Sumatra province, a disaster official said Friday.

Irwan Syahri, from the local disaster mitigation agency in Langkat district, said the dead included three children. He said many of the victims were burned beyond recognition.

Faisal Riza, whose wife Marlina died in the fire, said the workers at the match business were all women, some of whom brought their children with them.

“I was walking to a mosque for prayers when I heard the factory in an alley just about 200 meters from my house was on fire,” he said at a police hospital in Medan where bodies were taken. “I ran to save her, but it was too late. When I got there, the factory was burned down.”

The house owner, an elderly woman identified only as Ros, told MetroTV that she had rented the property for the past four years to a businessman from the provincial capital, Medan.

Riza said the building’s front door was usually locked, and the fire had started at the back of the property. Bodies were piled up near the front door, he said.

Millions of Indonesians work in unsafe conditions in informal or poorly regulated industries and accidents and fatalities are common.

Dozens died in the collapse of an unlicensed gold mine in North Sulawesi in February, and at least 47 people including underage workers were killed by a blaze at a fireworks factory in a Jakarta satellite city in October 2017.

ADVERTISEMENT
Read Next
90 students hospitalized in Batangas due to hyperventilation
EDITORS' PICK
CALVIT-C: Non-acidic, high-absorption vitamin C now available online
Extend or downgrade quarantine? Metro mayors to weigh on fate of lockdown
Recto on repatriated OFWs: Treat them as heroes not carriers of disease
Someone from the Philippines could win $313 Million jackpot this Tuesday night!
Philippines short of 94K contact tracers, DOH says
Conquer the World with the Newest ASUS VivoBook S14 (M433)
MOST READ
ABS-CBN unions decry attacks on online drive
Duterte: No COVID-19 vaccine? Opening of classes ‘useless’
Private hospitals to Duterte: Replace ‘exhausted’ Duque
Metro Manila likely to shift to MGCQ by June 1, but with ‘localized lockdown’
Don't miss out on the latest news and information.