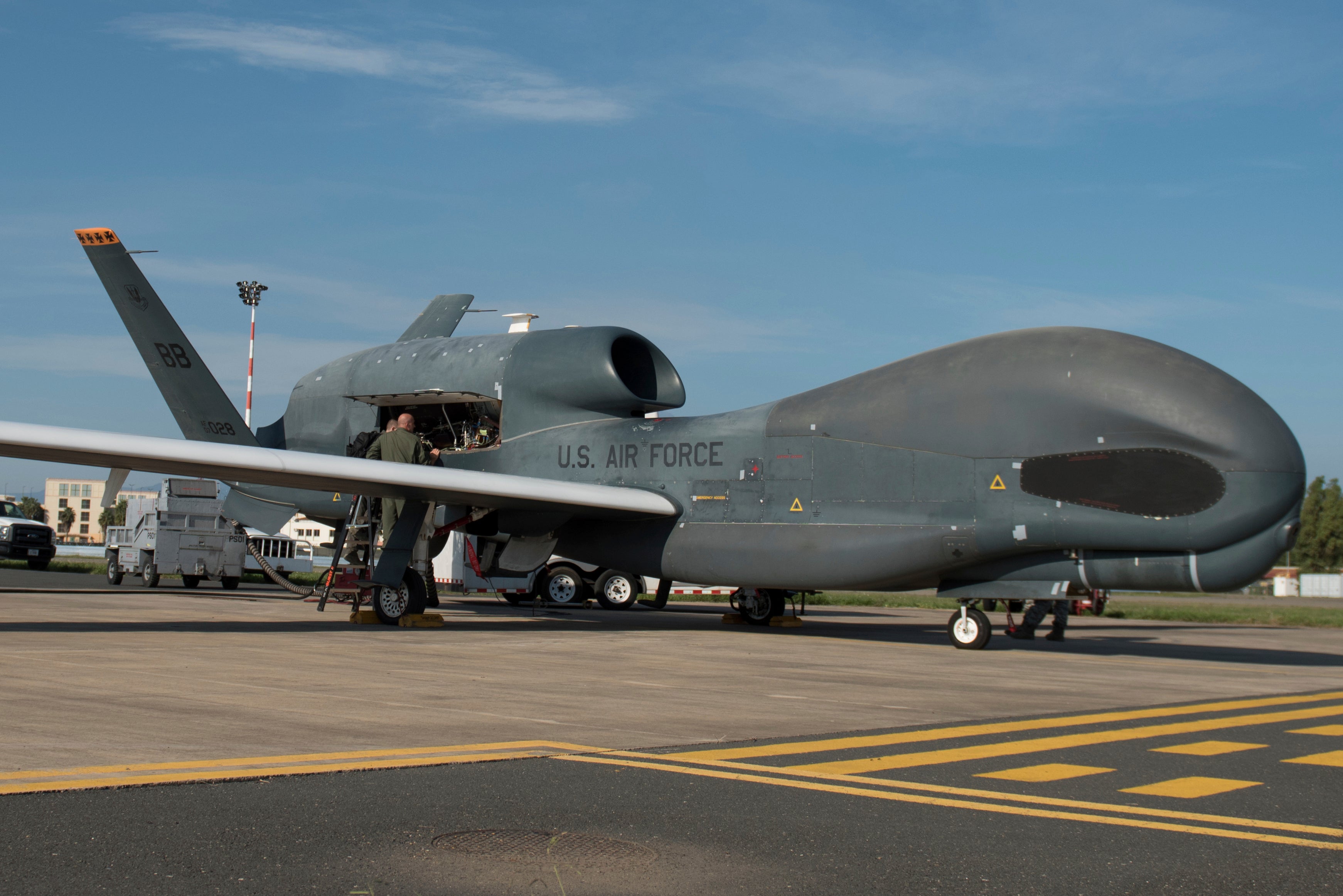 In this Oct. 24, 2018, photo released by the U.S. Air Force, members of the 7th Reconnaissance Squadron prepare to launch an RQ-4 Global Hawk at Naval Air Station Sigonella, Italy. Iran’s Revolutionary Guard shot down a U.S. RQ-4 Global Hawk on Thursday, June 20, 2019, amid heightened tensions between Tehran and Washington over its collapsing nuclear deal with world powers, American and Iranian officials said, though they disputed the circumstances of the incident. (Staff Sgt. Ramon A. Adelan/U.S. Air Force via AP)

DUBAI, United Arab Emirates— The U.S. on Friday barred American-registered aircraft from flying over parts of the Persian Gulf and the Gulf of Oman amid heightened tensions after Iran’s Revolutionary Guard shot down a U.S. military drone.

The announcement from the Federal Aviation Administration came over an Iranian surface-to-air missile on Thursday bringing down the U.S. Navy RQ-4A Global Hawk, an unmanned aircraft with a wingspan larger than a Boeing 737 jetliner and costing over $100 million. The U.S. said it made plans for limited strikes on Iran in response, but then called them off.

The FAA previously warned commercial aircraft of the possibility of Iranian anti-aircraft gunners mistaking them for military aircraft, something dismissed by Tehran some 30 years after the U.S. Navy shot down an Iranian passenger jet. 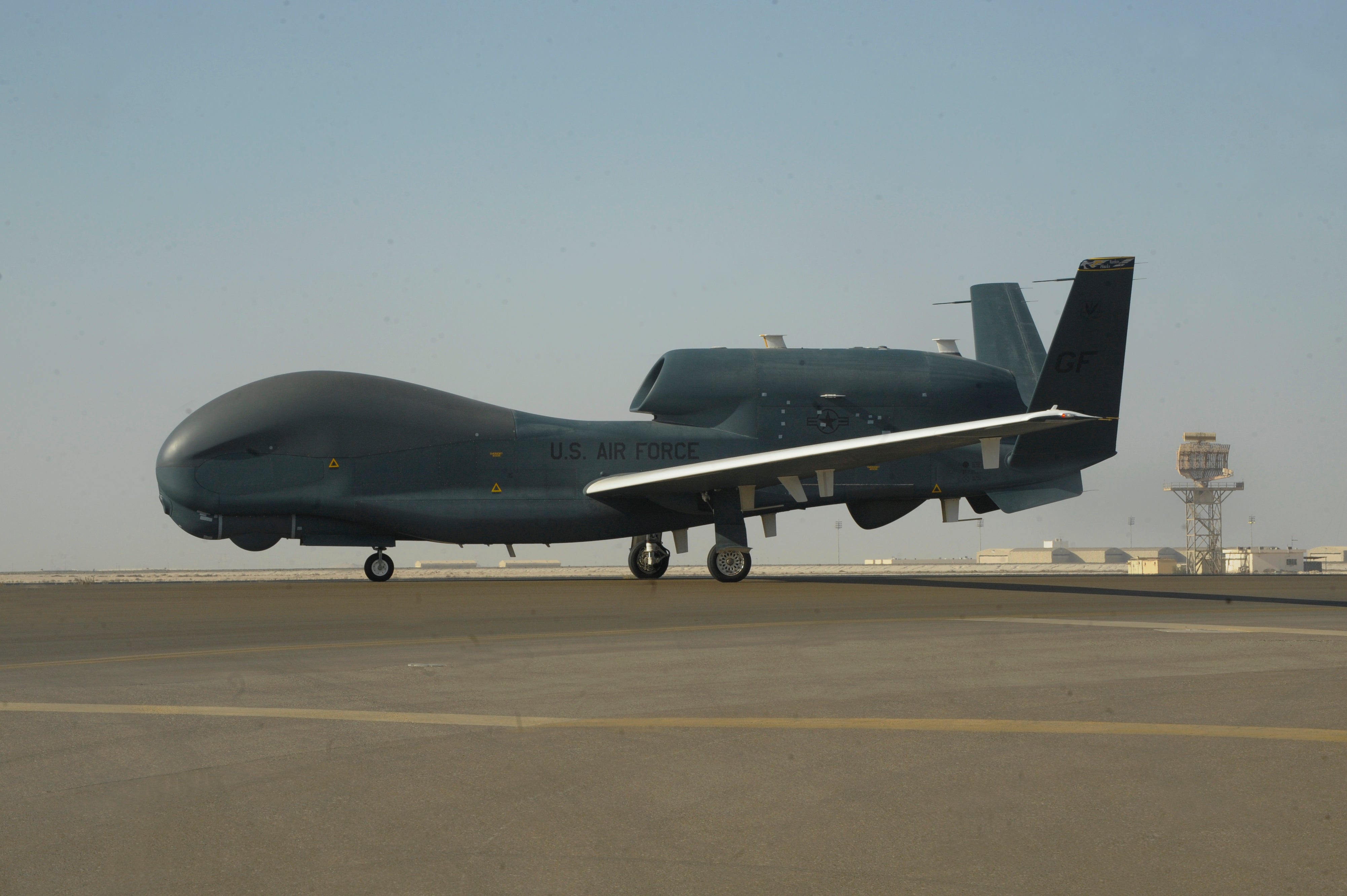 In this Feb. 13, 2018, photo released by the U.S. Air Force, an RQ-4 Global Hawk is seen on the tarmac of Al-Dhafra Air Base near Abu Dhabi, United Arab Emirates. Iran’s Revolutionary Guard shot down a U.S. RQ-4 Global Hawk on Thursday, June 20, 2019, amid heightened tensions between Tehran and Washington over its collapsing nuclear deal with world powers, American and Iranian officials said, though they disputed the circumstances of the incident. (Airman 1st Class D. Blake Browning/U.S. Air Force via AP)

The FAA said this would affect the area of the Tehran Flight Information Region. It wasn’t immediately clear if that included the entire Persian Gulf and Gulf of Oman as different countries also maintain their own flight controls in the region. The FAA’s operations center referred questions to its press office, which did not immediately respond.

There are “heightened military activities and increased political tensions in the region, which present an inadvertent risk to U.S. civil aviation operations and potential for miscalculation or misidentified,” the FAA said. “The risk to U.S. civil aviation is demonstrated by the Iranian surface-to-air missile shoot-down of a U.S. unmanned aircraft system on 19 June 2019 while it was operating in the vicinity of civil air routes above the Gulf of Oman.”

There was no immediate reaction in Iran to the announcement.

The Persian Gulf is home to some of the world’s top long-haul carriers, who already have been battered by Trump’s travel bans targeting a group of predominantly Muslim countries, as well as an earlier ban on laptops in airplane cabins for Mideast carriers. The major carriers, Etihad, Emirates and Qatar Airways, as well as low-cost carriers, did not immediately respond to requests for comment.

Iran said the drone “violated” its territorial airspace, while the U.S. called the missile fire “an unprovoked attack” in international airspace over the narrow mouth of the Persian Gulf and President Donald Trump tweeted that “Iran made a very big mistake!”

Trump later appeared to play down the incident, telling reporters in the Oval Office that he had a feeling “a general or somebody” being “loose and stupid” made a mistake in shooting down the drone.

A U.S. official said the military made preparations Thursday night for limited strikes on Iran in retaliation for the downing of a U.S. surveillance drone, but approval was abruptly withdrawn before the attacks were launched.

The official, who was not authorized to discuss the operation publicly and spoke on condition of anonymity, said the targets would have included radars and missile batteries.

The New York Times reported that President Donald Trump had approved the strikes, but then called them off. The newspaper cited anonymous senior administration officials.

The White House on Thursday night declined requests for information about whether Trump changed his mind.

The incident immediately heightened the crisis already gripping the wider region, which is rooted in Trump withdrawing the U.S. a year ago from Iran’s 2015 nuclear deal and imposing crippling new sanctions on Tehran. Recently, Iran quadrupled its production of low-enriched uranium to be on pace to break one of the deal’s terms by next week while threatening to raise enrichment closer to weapons-grade levels on July 7 if Europe doesn’t offer it a new deal.

Citing unspecified Iranian threats, the U.S. has sent an aircraft carrier to the Middle East and deployed additional troops alongside the tens of thousands already there. All this has raised fears that a miscalculation or further rise in tensions could push the U.S. and Iran into an open conflict, 40 years after Tehran’s Islamic Revolution.

“We do not have any intention for war with any country, but we are fully ready for war,” Revolutionary Guard commander Gen. Hossein Salami said in a televised address Thursday. /muf