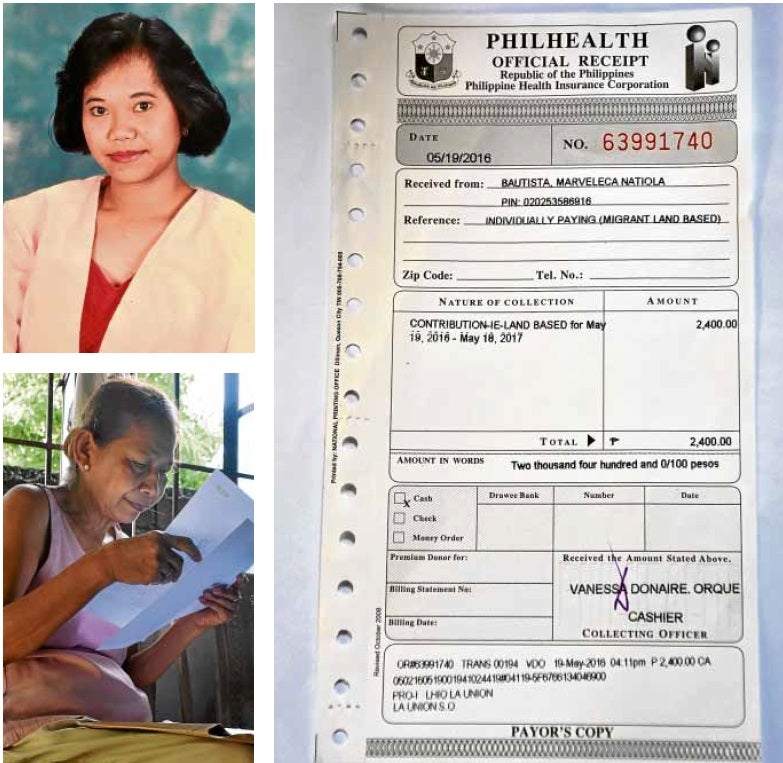 NOT AN ISOLATED CASE Marveleca Bautista Jauod (top left) of San Fernando, La Union province,
flew to Kuwait towork as a domestic helper in August 2015, just when her then 8-year-old son was
down with dengue.After the hospital billing came, she learned through her mother, Vivencia, that her
hiring agency failed to remit her annual contribution as a PhilHealth member and that the receipt
issued to her had a control number traced to another person from Laguna. —CONTRIBUTED PHOTOS

Hours before her flight to Kuwait on Aug. 12, 2015, overseas Filipino worker (OFW) Marveleca Bautista-Jauod found herself caught in a dilemma.

Her hands were clutching her plane ticket to fly to her second contract as a domestic, but her heart and mind were with her 8-year-old son in their hometown of San Fernando in La Union province, who had been stricken with dengue and rushed to the hospital.

Earlier, her next of kin, who could not afford to see her off, discovered that her hiring agency, Greenworld Placement Services, had failed to remit the annual premium of P2,400 for her Philippine Health Insurance Corp. (PhilHealth) membership. The premium had been paid by her employer in Kuwait as part of the agency’s hiring requirements.

Marveleca’s benefit package was supposed to cover the full hospitalization cost of her son, Mar Israel, at Lorma Medical Center. But because her PhilHealth member data record did not reflect any payment made by her agency, her family had to shell out around P12,000 for the hospital fees.

Depending on the severity of the disease, PhilHealth provides between P10,000 and P16,000 for each case of dengue.

“She was crying and wanted to return home. But I told her: Don’t cry, we’ll take care of this,” Marveleca’s mother, Vivencia Bautista, told the Inquirer. “Her brother paid her son’s fees. We couldn’t shoulder such an amount.”

The amount could have risen to more than P15,000 had the attending doctor not waived her professional fee after learning of Marveleca’s predicament, said Vivencia, 68.

Vivencia eventually found out that Marveleca’s POR (PhilHealth official receipt) was fake, and that what the agency had given the family was only a photocopy.

The Bautistas’ case is not isolated.

“Eli,” a PhilHealth employee who monitored cases of fake PORs until September 2018, had recognized the same scheme in at least 48 hiring agencies handling land-based workers. At least 7,257 OFWs had been defrauded under the scheme since 2015.

The number could even be higher as it represents only those OFWs who either verified their PhilHealth membership or were denied the benefits of the state health insurance agency, Eli said.

The scheme has also cost PhilHealth at least P17.4 million in unremitted premiums, Eli said. Using Health Secretary Francisco Duque III’s “average value claim” for PhilHealth services of P10,000, the defrauded OFWs were not only deprived of social protection but also made to spend a total of P72.6 million in health care costs.

According to Eli, the scheme to prey on the country’s modern-day heroes appeared to have started just five months after the Philippine Overseas Employment Administration (POEA) issued Advisory No. 6.

Since April 1, 2015, the POEA had stopped requiring OFWs to pay their premiums with the Home Development Mutual Fund and PhilHealth before they could be issued an overseas employment certificate (OEC) or exit clearance.

Advisory No. 6, signed by then POEA Administrator Hans Cacdac, instead “strongly encouraged” OFWs to pay their premiums to these agencies’ respective authorized collection centers “for their protection.”

According to POEA Administrator Bernard Olalia, the decision to no longer tie premium payments with the release of the OEC was made because of the clamor of the workers themselves, who lamented that PhilHealth’s annual fee was too steep.

Eli said the order unintentionally provided an avenue for crooks in the recruitment agencies to defraud OFWs.

As a matter of practice, a number of recruitment agencies pay for the necessary fees and premiums on behalf of OFWs, Olalia said. The agencies are later reimbursed by the OFWs through such arrangements as the “fly now, pay later” plan.

But while it took one PhilHealth employee to expose the scam, the lack of political will and general “inaction” of top PhilHealth officials hindered its speedy resolution, Eli said.

Since the fake PORs were first spotted in 2015, the case files have been passed on to five PhilHealth presidents, illustrating the bureaucratic red tape plaguing PhilHealth’s inquiries into irregularities, he said.

Eli cited the case of Dennis Mas, then the regional vice president of PhilHealth’s National Capital Region (NCR) office. Mas was supposedly concerned that picking up the issue of the fake PORs—which by that time was already being reported in six provinces as well—could affect his chances of promotion.

It came to the point that a whistleblower case was filed against Mas “to stop him from interfering in the fact-finding activities,” Eli said.

The case, however, did not prosper. “It was useless,” Eli said. “What happened was, it was the word offered by a person of position against a person of lower rank. When did the truth become rank-dependent?”

WellMed Dialysis Center employees would have also wanted to be put under PhilHealth’s whistleblower program when they exposed last year the “ghost dialysis” scheme of their employer. But they were denied protection under the program as it was supposedly exclusive only to PhilHealth employees.

“It should be programwide. That’s the last recourse,” Eli said.

Speaking with the Inquirer, Mas denied sitting on the fake receipts issue and said he had “exhausted all remedies” to address the matter, including referring these to the National Bureau of Investigation.

He said that when he left his post as NCR vice president in 2017, some of the implicated recruitment agencies either settled the unremitted premiums or filed charges against their involved personnel.

“We went out of our way to refer the case to the NBI because we do not have a prosecutorial function,” Mas said. “From the branch management, the action was to charge [the agencies]. There is no need for any other action, except to campaign that payments be paid directly to PhilHealth. What other actions do they want?”

Mas shrugged off the allegations leveled at him as the result of “office politics,” especially as this “old issue” arose when he was applying for the post of senior vice president.

“What she sends to us—P10,000 a month—is just enough to pay for our debts, for our meals. We don’t have savings. So if one of us gets sick, we only have PhilHealth to rely on,” said Jauod, 44.

A high school graduate, Jauod himself has been struggling to find a stable job. On top of household chores, he accepts part-time construction work at P300 a day at his children’s school.

After her grandson was hospitalized, Vivencia paid her daughter Marveleca’s annual premium to help ensure that if another family member gets sick, PhilHealth would cover the costs of treatment.

But when she checked last Friday, Vivencia said, she learned that the last payment recorded in Marveleca’s account was still the one she paid for the 2016-2017 period.

Marveleca said she could not afford to set aside money for her PhilHealth premiums given her meager salary, the equivalent of P20,000.

“I know paying the premium is important, but I have to budget what I earn for my loved ones. I prioritize my family’s allowance, and whatever amount I can give to my mother,” she said, adding:

“I’ve been working abroad as a domestic helper for four [consecutive] years now, but I still haven’t saved anything. But at least I know that whatever I send to my family is produced with my sweat and hard work.”

Vivencia is not interested in getting back the money that her family lost, and is more keen on seeking accountability from the people responsible for the fake-receipt scam.

But how can that happen when the POEA, which could have helped sanction erring recruitment agencies, is left in the dark?