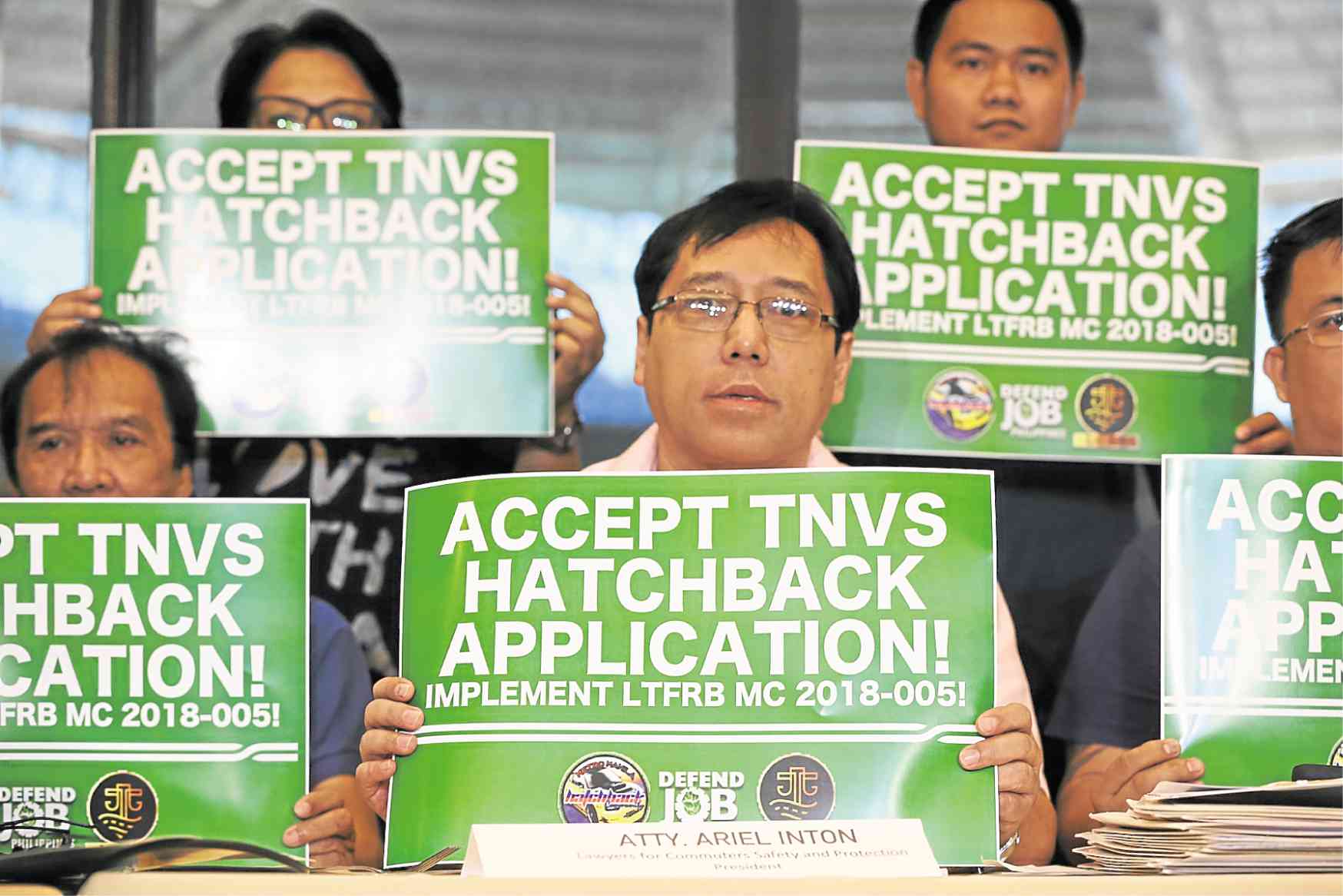 LEGAL ACTION Displaced Grab drivers and their supporters urge the Land Transportation Franchising and Regulatory Board to implement a memorandum which allows hatchbacks to operate until 2021. —NIÑO JESUS ORBETA

Hatchback car drivers whose livelihoods were imperiled by ride-hailing giant Grab’s mass deactivation will file today a class action suit against the Land Transportation Franchising and Regulatory Board (LTFRB) to compel the agency to allow them back on the road.

Harold Banzuela of the Lawyers for Commuters’ Safety and Protection said that he would file a petition for mandamus in the Quezon City Regional Trial Court on behalf of at least 10 hatchback drivers who were barred by the LTFRB from renewing their franchise.

The petition was aimed at forcing the LTFRB to implement its Memorandum Circular (MC) 2018-005, which allowed hatchbacks to operate as transport network vehicle service (TNVS) units for only three years, starting on Feb. 28, 2018, to allow drivers to recover the money they spent on buying their vehicles.

The board, however, has refused to process new franchise applications or even those filing for renewal, citing concerns over the safety of the smaller vehicles. The drivers’ failure to secure a franchise from the LTFRB later formed the basis for their removal from Grab’s platform on June 10.

“The LTFRB rejected applications without the necessary MC modifying or amending the existing MC 2018-005,” said Banzuela.

In an interview, he said they were still studying whether to seek damages from the LTFRB. He stressed, however, that the main purpose of the class suit was to force the agency to implement its own order by accepting hatchback applications until 2021.

Grab, whose services have been hampered by a lack of some 20,000 TNVS units following the mass deactivation, earlier asked the LTFRB to allow hatchbacks to operate as part of a dry run.

Hatchback Community president Leonardo de Leon Jr. said some 1,225 drivers had lost their livelihoods due to their expulsion from Grab’s platform. These drivers, he said, had invested in their cars for the sole purpose of working for the transport network company.

ADVERTISEMENT
Read Next
COA chides DOJ for 43 foreign travels in 2018
EDITORS' PICK
Smart 5G goes live
Water remains our saving grace right now
PNP: Checkpoints back in MECQ areas
Been there, done that but what’s the difference between MECQ and GCQ?
BREAKING: 3,226 latest COVID-19 cases bring PH’s total to 106,330
A gem of a residence in the new normal
MOST READ
MECQ guidelines in infographics
Doctors group to Duterte: ‘There was never a call for a revolt’
MECQ in NCR, other areas: Mass transportation suspended, quarantine pass required anew
Duterte heeds frontliners’ plea, reimposes MECQ in Metro Manila, other areas Aug. 4 -18
Don't miss out on the latest news and information.