A row of boys lying on newsprint-covered tables howl in pain and grit their teeth as part of “circumcision season” in the Philippines when thousands of youngsters suffer through the procedure en masse.

The removal of foreskins is a centuries-old rite of passage to adulthood in the country, which has one of the highest rates of male circumcision in the world. 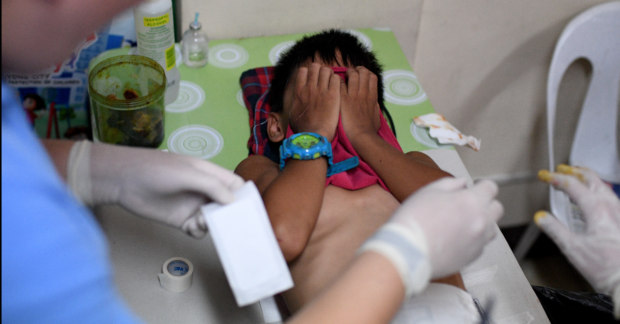 Yet even as circumcision comes under increasing scrutiny around the world, with critics branding it “child abuse,” it is rarely questioned in the Philippines and boys face tremendous pressure to undergo the procedure.

Every year, thousands of pre-teens from poor families go through the operation for free at government or community-sponsored clinics.

“I was shouting the whole time because it hurt so bad,” Vladimir Vincent Arbon told Agence France-Presse after his 20-minute ordeal.

“My mum told me that I need to get circumcised so I would grow taller and become a real man,” the 11-year-old added, expressing the pressure many youths face.

He was among 1,500 boys who underwent the procedure in one city near Manila, but the scenes are similar in clinics nationwide.

“To get circumcised is probably the essence of being a man… for boys, circumcision is necessary to be called a man,” Joana Nobleza told Agence France-Presse after her 11-year-old son Carlos underwent the operation.

The boys, some with their parents, arrive before dawn typically in the months of April and May for an anxious wait in long lines — and then a sharp jolt of pain.

Many get local anesthetics but for some, the sensation is still intense. They are also provided with antibiotics to protect against any infections.

Around 90 percent of males are circumcised for non-religious reasons in the Philippines, according to World Health Organization data.

In towns across the country, government and health workers convert classrooms, health centers or sports complexes into makeshift operating rooms where boys as young as nine take a number and wait their turn.

The pressure even manifests itself in the Tagalog language word for “uncircumcised,” which is a slur similar to coward.

“The term ‘supot’ implies that one is different and a coward… for lacking the courage to experience the pain and anxiety,” Professor Romeo Lee of De La Salle University said in his research about the tradition.

The roots of circumcision in the Philippines can be traced back to the arrival of Islam in 1450, according to anthropologist Nestor Castro.

However even after the nation became majority-Christian under 300 years of Spanish colonial rule, the practice persisted as a cultural rite.

Male circumcision tends to be more common in nations with significant Muslim or Jewish populations, and less so in Catholic-majority places.

In the past decade, the procedure has become increasingly controversial as the anti-circumcision movement has grown worldwide.

Critics consider it medically unnecessary and, as the majority of procedures are conducted in infancy, a violation of children’s rights as they are unable to give informed consent.

“I would assume 18 or 19-year-olds would have the wherewithal to do some research… and consent only after much thought,” said John Geisheker, spokesman for United States-based advocacy group Doctors Opposing Circumcision.

“But clearly a 10-year-old or an eight-year-old can’t do that and so… it’s basically child abuse,” he added.

A decline in the number of children undergoing circumcision has been reported in the U.S., where historically the procedure has been common.

There is evidence safe male circumcision reduces the risk of heterosexually acquired HIV in areas with epidemics, according to the World Health Organization (WHO), which has included the procedure in some of its programs to tackle the virus in southern Africa.

But Castro, the anthropologist, believes removing the foreskin has a very specific value in Philippine culture.

“A circumcised lad is no longer treated as a young boy and is now given more adult roles within family and society,” he added, noting it’s also important socially.

“A rite-of-passage is usually done collectively. There is always a group of boys who grow up together, enter school, and get circumcised at the same time,” Castro told Agence France-Presse.

For boys in poor communities and their families, the free circumcision events sponsored by the government are the only option but most go willingly and are proud to endure it.

Holding his hand protectively over his bandaged penis, Erwin Cyrus Elecanal explains: “Going through the test of circumcision has made me a full-fledged adolescent.”

The 12-year-old added: “I will be more mature now and be helpful to my family.” RGA/NVG