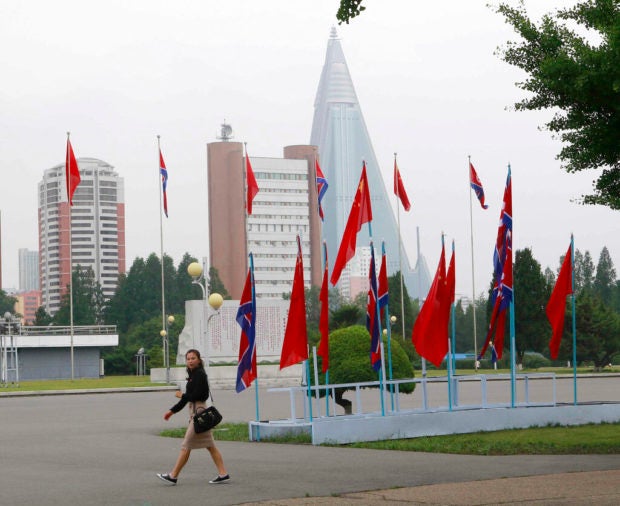 A woman walks past North Korean and Chinese national flags hoisted on a street in Pyongyang, North Korea on June 20, 2019. AP

BEIJING — The leaders of China and North Korea were talking in the North Korean capital Thursday, with stalled nuclear negotiations with Washington expected to be on the agenda.

Earlier, Xi, his wife Peng Liyuan and senior Chinese officials were greeted with a 21-gun salute at a huge arrival ceremony at the airport in Pyongyang.

About 10,000 people stood in tight formation, waving flowers and chanting slogans to welcome Xi, according to Xinhua. Kim and his wife, Ri Sol Ju, met the visiting delegation at the airport.

Xi, who is on a two-day state visit to North Korea, is the first Chinese leader to visit North Korea in 14 years.

The summit comes as both Xi and Kim are locked in separate disputes with the United States — Xi over trade and Kim over his nuclear weapons.

A Xinhua commentary said China could play a unique and constructive role in breaking the cycle of mistrust between North Korea and the U.S. so they can work out a roadmap to achieve denuclearization.

The US is demanding that North Korea abandon its nuclear weapons development before international sanctions are lifted. North Korea is seeking a step-by-step approach in which a step toward its denuclearization would be matched by a concession from the U.S., notably a relaxation of economic sanctions.

China backs what it calls a “suspension for suspension” proposal. Xinhua said both sides “need to have reasonable expectations and refrain from imposing unilateral and unrealistic demands.”

A former North Korean diplomat who defected in 2016 said he thinks Kim wants to give Xi a message to deliver to President Donald Trump when the two meet at next week’s G-20 summit in Japan.

Thae Yong Ho said that Kim may offer some kind of compromise on his nuclear facilities to set up a third summit with the US president. But he cautioned such a move would be only to buy time and not to denuclearize. Thae spoke at a news conference in Tokyo while promoting the Japanese translation of his book.

US-North Korea talks have been stalled since Kim and Trump had their second summit in February in Hanoi, Vietnam.
Experts say Xi will likely endorse North Korea’s calls for an incremental disarmament process.

His meeting with Kim would be their fifth summit since Kim entered nuclear diplomacy with the United States and South Korea early last year.

A banner at the airport welcome ceremony read, “Long Live with Unbreakable Friendship and Unity Formed by Blood,” Xinhua said.

The nations fought together in the 1950-53 Korean War against the United States, South Korea and their allies, but there has been friction in recent years, especially over the North’s relentless push for nuclear weapons.

Xinhua said that people lined up along the way from the airport in Pyongyang to the city, waving flags and flowers and chanting “Long Live the China-DPRK Friendship.” DPRK, the Democratic People’s Republic of Korea, is the official name of North Korea. /ee