On World Refugee Day, public urged to ‘help Marawi get back on its feet’ 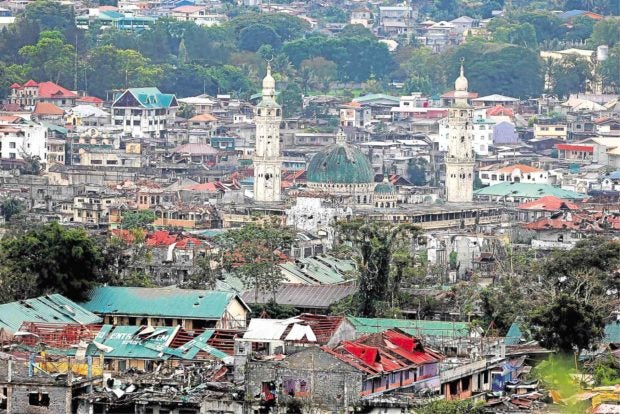 MANILA, Philippines — Peace advocates has called for stronger solidarity for the people of war-torn Marawi  who “continue to be internally displaced” and feel the “profound pains” of the siege that resulted in many deaths and destruction in the city.

In a statement in time for the World Refugee Day on Thursday, the Initiatives for International Dialogue (IID) and its other partners in the broad civil society and peace movement in the Philippines and in Southeast Asia likewise urged the government to address the “slow pace” of rehabilitation of the city.

“The tragic incident resulted to unnecessary loss of innocent lives, displacement of thousands of families and virtually reduced much of the once beautiful and peaceful Marawi City to rubble,” IID said.

“This year’s theme is dubbed ‘#StepWithRefugees – Take A Step on World Refugee Day.’ It is within this context and spirit of ‘taking a step’ that we take this year’s observance of World Refugee Day 2019 as another opportunity to sustain our advocacy for continuing humanitarian assistance to help in the rehabilitation and rebuilding of Marawi and the safe and dignified return and reintegration of the thousands of IDPs (internally displaced persons) and their families,” it added.

The resolution aims to draw public’s attention to the millions of refugees and IDPs worldwide who have been forced to flee their homes due to armed conflict and persecution, the group added.

“We maintain our resolve that respecting the primacy of the peace process for Mindanao – which has now gained greater momentum after the ratification of the Bangsamoro Organic Law (BOL) that has granted the Bangsamoro greater genuine autonomy to exercise its inherent right to self-determination – addresses the fundamental historical injustices against them and is an effective antidote to violent extremism which can fester after what happened to Marawi,” the IID said.

The group also called on the Philippine government to “put the immediate needs of the displaced families at the heart of the rehabilitation plan for the city, and deliver the ‘right to durable peace’ of the thousands of IDPs without further delay.”

The peace advocates also extended its “heartfelt solidarity” with the bereaved families of those who perished when government military forces fought against extremist groups who held the entire city hostage for five months in 2017.

The group expressed hope that this year’s celebration of the World Refugee Day will “reignite a whole-of-society solidarity to help Marawi get back on its feet.” (Editor: Katherine G. Adraneda)