TEHRAN, Iran – Iran’s Revolutionary Guard said Thursday it shot down a U.S. drone amid heightened tensions between Tehran and Washington over its collapsing nuclear deal.

The reported shootdown of the RQ-4 Global Hawk comes after the U.S. military previously alleged Iran fired a missile at another drone last week that responded to the attack on two oil tankers near the Gulf of Oman. 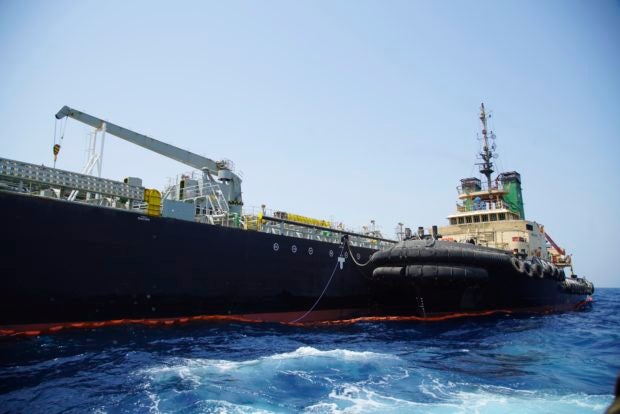 The Panama-flagged, Japanese owned oil tanker Kokuka Courageous, that the U.S. Navy says was damaged by a limpet mine, is anchored off Fujairah, United Arab Emirates, during a trip organized by the Navy for journalists, Wednesday, June 19, 2019. The limpet mines used to attack the oil tanker near the Strait of Hormuz bore “a striking resemblance” to similar mines displayed by Iran, a U.S. Navy explosives expert said Wednesday. Iran has denied being involved. (AP Photo/Fay Abuelgasim)

The U.S. blames Iran for the attack on the ships, which Tehran denies.

The attacks come against the backdrop of heightened tensions between the U.S. and Iran following President Donald Trump’s decision to withdraw from Tehran’s nuclear deal with world powers a year ago.

Iran recently has quadrupled its production of low-enriched uranium and threatened to boost its enrichment closer to weapons-grade levels, trying to pressure Europe for new terms to the 2015 deal.

In recent weeks, the U.S. has sped an aircraft carrier to the Mideast and deployed additional troops to the tens of thousands already in the region.

All this has raised fears that a miscalculation or further rise in tensions could push the U.S. and Iran into an open conflict, some 40 years after Tehran’s Islamic Revolution.

Iran’s paramilitary Revolutionary Guard, which answers only to Supreme Leader Ayatollah Ali Khamenei, said it shot down the drone Thursday morning when it entered Iranian airspace near the Kouhmobarak district in southern Iran’s Hormozgan province.

Kouhmobarak is some 1,200 kilometers (750 miles) southeast of Tehran and is close to the Strait of Hormuz.

Capt. Bill Urban, a U.S. Central Command spokesman, declined to comment when asked if an American drone was shot down.

However, he told The Associated Press: “There was no drone over Iranian territory.” /gsg