ALBANY, N.Y.  – A push to legalize recreational marijuana in New York has failed after state leaders did not reach a consensus on several key details in the final days of the legislative session.

Sen. Liz Krueger, a Manhattan Democrat and the lead sponsor of the main legalization bill in her chamber, confirmed Wednesday that her legislation would not pass this year.

“Through months of negotiation and conversation … we made great strides,” she said in a statement. “We came very close to crossing the finish line, but we ran out of time.” 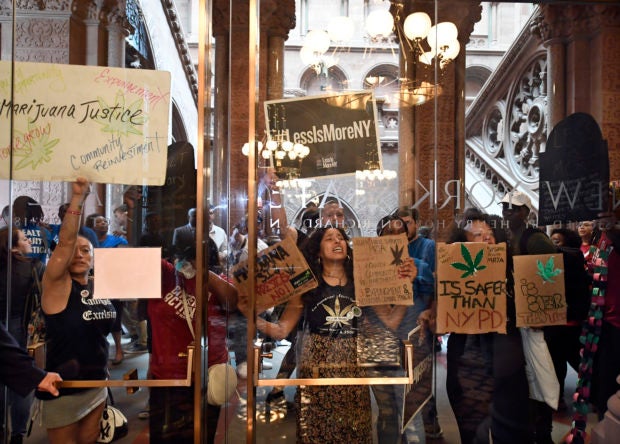 Despite broad support for legalization and polls showing its statewide popularity, lawmakers couldn’t agree on the many details of legalization, such as how tax revenue should be spent, whether past pot convictions should be expunged, and whether local communities could opt out of hosting dispensaries or instead would have to opt in.

For supporters who had hoped the nation’s fourth-most populous state would soon join the growing list of states where recreational pot is legal, the failure of the bill was a significant disappointment.

They’ll now turn their attention toward next year, an election year, in which legalization may be an even tougher political challenge.

Kevin Sabet with Smart Approaches to Marijuana, an organization that opposes the push, said he thinks they have now delayed legalization for several years.

He predicted that lawmakers will not want to take a vote on the topic during an election year, arguing that marijuana stores are unpopular at the local level.

Sabet stipulated the group does support the decriminalization of marijuana.

Melissa Moore, New York state deputy director for the Drug Policy Alliance, said lawmakers squandered an opportunity and left a stream of new tax revenue and tens of thousands of new jobs on the table by not passing the proposal.

“As a whole, this could have been an enormous economic engine for the state,” she said. “Instead, what we have right now is continuation of the status quo.”

With lawmakers set to adjourn this week, some supporters hope there is time to pass a more modest bill to eliminate criminal penalties for possession of marijuana and create a process for people to clear their records of past pot convictions.

Democratic Gov. Andrew Cuomo, who proposed his own legalization legislation back in January, said he would support further decriminalization.

Under current law, those caught with small amounts of marijuana are subject to fines, and not misdemeanor charges. But police can still arrest people for smoking pot in public, a wrinkle legalization advocates say is too often used to target young racial minorities.

“Communities of color have been disproportionately impacted by laws governing marijuana for far too long and it has to end,” Cuomo said in a statement Wednesday. “The time to act is now.”

The so-called “plan B” bill would also expand access to the state’s medical marijuana program and seek to boost the state’s hemp industry.

Illinois is poised to become the 11th state to legalize recreational marijuana after lawmakers in that state approved legalization legislation last month. Two of New York’s neighbors, Massachusetts and Vermont, have already taken the step.

Cuomo included his legalization proposal in his state budget recommendation but pulled the measure after lawmakers couldn’t reach consensus.

He warned at the time that the decision to consider marijuana legalization on its own would make it harder to pass.

The effort lost further momentum when lawmakers in next-door New Jersey failed to pass their own legalization efforts.

Dozens of demonstrators rallied at the New York Capitol Wednesday, highlighting the marijuana legislation and other proposals they said were not properly prioritized.

Demonstrator Pilar DeJesus expressed sharp frustration that Democrats could not pass marijuana legalization and said marijuana has been used to criminalize people of color for decades.

“We need to stop ruining lives with prohibition,” she said. /gsg