LONDON – Former Foreign Secretary Boris Johnson increased his lead in the race to become Britain’s next prime minister Tuesday in a Conservative Party vote that eliminated one of his rivals and enabled upstart candidate Rory Stewart to defy expectations by remaining in the contest.

Johnson, a flamboyant former foreign secretary, won 126 of the 313 votes cast by Conservative lawmakers in their second-round of balloting. 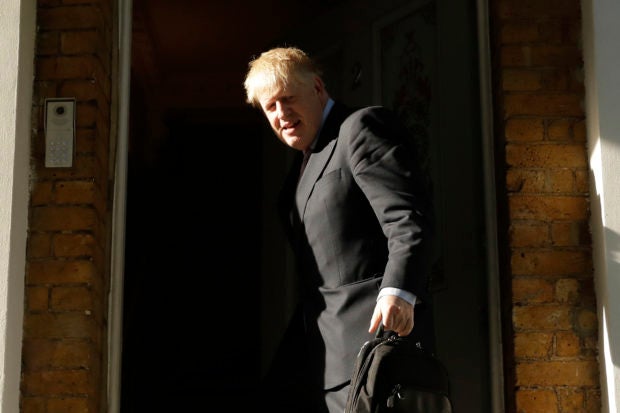 The vote left five contenders vying to be the Tory leader who will succeed Theresa May as prime minister, and all but guaranteed Johnson would be one of the two candidates competing in a runoff decided by rank-and-file party members as well as elected politicians.

Jeremy Hunt, who followed Johnson as foreign secretary in May’s government, had the next-highest number of votes with 42. Hunt Environment Secretary Michael Gove, Home Secretary Sajid Javid and Stewart all trailed far behind in what is now effectively a race for second place.

Ex-Brexit Secretary Dominic Raab got only 30 votes, three short of the threshold needed to go through to the next round.

After lawmakers’ votes were counted,

Johnson and the other remaining candidates traded barbs about Brexit and their plans for the economy, the welfare system and the environment in a messy, fractious televised debate.

Johnson was accused of trying to dodge scrutiny after he skipped an earlier debate and a question session with journalists.

Tory lawmakers will vote again Wednesday and Thursday, eliminating at least one candidate each time.

The final two contenders will go to a postal ballot of all 160,000 Conservative Party members nationwide.

The winner who will replace May is due to be announced in late July.

May stepped down as party leader earlier this month after failing to secure Parliament’s approval for her Brexit deal. She is leading the government until her successor is picked.

All the contenders vow they will succeed where May failed and lead Britain out of the European Union, though they differ about how to break the country’s Brexit deadlock.

Johnson insists the U.K. must leave the bloc on the rescheduled date of Oct. 31 31, with or without a divorce deal to smooth the way.

He said during the BBC debate there would be a “catastrophic loss of confidence in politics” if Brexit was delayed any further. The withdrawal, originally set for May 29, was pushed back after May sought two extensions from the EU. /gsg

Read Next
Boeing signs first deal for 737 Max jet since deadly crashes
EDITORS' PICK
FDA reviewing COVID-19 vaccines’ EUA for booster shots
NCR’s COVID-9 alert level may be downgraded from 3 to 2 soon — DOH
Climate Change Commission and Nestlé PH to discover sustainability-focused solutions
Biden vows to stand with Asia on freedom, hits at China on Taiwan
Legarda emphasizes role of ICC/IPs in nation building this IP month
What’s at stake for every fighter at ONE: NextGen
MOST READ
Drivers now required to take driver’s education upon license renewal – LTO
Gordon to Duterte: You? Teaching me courtesy?
Yang, Lao, firms linked to Pharmally didn’t file ITRs for several years — Drilon
Marcos Jr’s ‘special diploma’ from Oxford: You can have it, too
Don't miss out on the latest news and information.