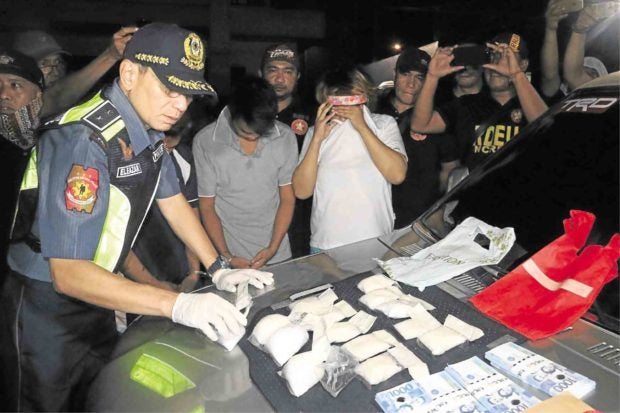 MANILA, Philippines — More than a decade after authorities dismantled the notorious “shabu tiangge” in Pasig City and sent its operator, Amin Boratong, to jail, the remaining members of his drug network continue to operate.

On Monday night, three suspects with links to the Boratong drug syndicate were caught by operatives of the National Capital Region Police Office-Regional Drug Enforcement Unit (NCRPO-RDEU) in Mandaluyong City.

Before their arrest, Raihana Mamiscal, Aliola Sultan and Jassir Panggaga sold half a kilo of shabu (crystal meth) to an undercover agent inside their van near the corner of Shaw Boulevard and A. Mabini Street at 11:25 p.m.

During a search, the police found another half-kilo of shabu inside the suspects’ vehicle for a total haul of 1 kilo with a street value of P6.8 million.

According to Police Maj. Gen. Guillermo Eleazar, the NCRPO chief, the suspects are all natives of Marawi City and belong to a group linked to Boratong, who operated the drug flea market found in Mapayapa Compound at Barangay Santo Tomas in Pasig City.

Authorities raided and consequently demolished the 2,000-sqm drug den—located just meters away from city hall—in February 2006. Over 300 people, including Boratong and his second wife, were arrested.

In July 2009, a Pasig court found Boratong and his wife guilty of owning and maintaining the shabu tiangge. He is currently serving a life sentence in the New Bilibid Prison in Muntinlupa City.

Despite the disbandment of the Boratong drug syndicate, some members continue to operate, with several arrested or killed in police operations over the years.

Eleazar said Mamiscal and her cohorts were supplying drugs to customers in Metro Manila and nearby Rizal province.

He added that Mamiscal and a certain Mike Usudan were arrested in July last year by NCRPO operatives for possession of illegal drugs and unlicensed firearms and ammunition. They were, however, released on bail.

Following her arrest on Monday night, Mamiscal and the other suspects face charges of violating Sections 5 (drug trading), 11 (possession) and 26 (conspiracy) of the Comprehensive Dangerous Drugs Act of 2002.

“With the arrest of these suspects, particularly Mamiscal, we believe we have significantly cut their drug network in Metro Manila,” Eleazar told reporters. “But just the same, we will pursue our investigation and [identify] their drug supplier and distributors.”