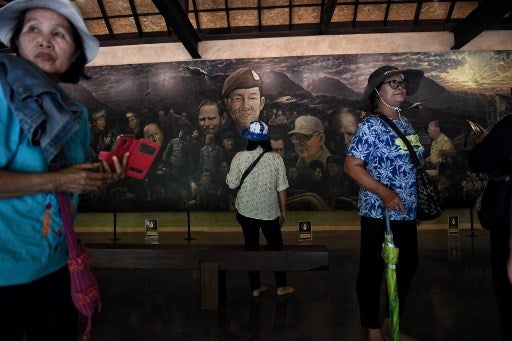 This picture taken on June 13, 2019 shows visitors taking photos in front of a mural, illustrating the efforts to rescue of the 12 boys from the “Wild Boars” football team and their coach after they were trapped in the Tham Luang cave last year, at the cave’s visitor centre in the Mae Sai district of Chiang Rai province.  AFP

MAE SAI, Thailand — Tourists snap selfies by a bronze statue of the diver who died trying to save the ‘Wild Boars’ football team from a flooded cave, while momentos from their rescue fly off the shelves — scooped up by the 1.3 million people who have descended on a once serene mountainside in northern Thailand.

“It’s amazing what happened here. I followed everything from Australia,” tourist John McGowan told AFP after taking photos at the visitor centre around 100 meters from the Tham Luang cave entrance.

“I wanted to see it with my own eyes,” the 60-year-old said, adding he was a little disappointed the cave is still off limits to visitors.

For a few dollars tourists can get framed photos at the site, pick up posters of the footballers and take home a souvenir t-shirt — some printed with the face of Saman Gunan the Thai diver who died in the bid to save the group.

There has been extraordinary global interest in the picturesque rural backwater of Mae Sai since 12 youngsters — aged between 11 and 16 — and their coach entered the Tham Luang cave on June 23, 2018.

They quickly became trapped by rising water levels and the daring, unprecedented mission to extract them through twisting flooded passageways captivated the world for 18 nail-biting days.

When they emerged — after being heavily sedated and manoeuvered out by expert divers — they did so into the centre of a global media frenzy.

The cave, which previously received around 5,000 visitors a year, has since been inundated by visitors both Thai and foreign.

“A miracle has happened here with these children,” Singaporean tourist Cheong, giving one name, said but adding Tham Luang “must still have a spiritual side” despite the mass popularity.

Mae Sai district, where the cave is located, was considered off the beaten track for foreign visitors.

The government now has big plans for the area around the storied cave, Kawee added, allocating a total of 50 million baht ($1.6 million) including a shopping complex, restaurants, hotels and several campsites outside the national park.

Vans disgorge streams of tourists who explore a visitor hub where the centrepiece is a mural entitled “The Heroes.”

It depicts the young footballers, stars of the rescue, and junta chief Prayut Chan-O-Cha — a reminder of the governmental fingerprints in aiding their cause.

At the heart of the mural is the beaming face of Saman Gunan, the Thai Navy SEAL diver who ran out off oxygen attempting to establish an air line to the children and their coach — the only fatality across the near three-week rescue mission.

Laying white flowers at the foot of his bronze statue, Thai nurse Sumalee, who travelled four hours to the site, described him as “the hero of the whole country” in a sobering reminder of the risks involved in the rescue amid the blizzard of marketing opportunities now attached to the cave story.

Nearby lottery ticket vendors are capitalizing on the perceived good fortune linked to the boys’ survival and the folkloric appeal of a nearby shrine. The number of stalls has mushroomed from a few dozen to around 250.

Kraingkrai Kamsuwan, 60, who moved his stall to the site weeks after the rescue, sells 4,000 tickets a month ($2.5) but reckons more will visitors will arrive once the cave reopens.

He told AFP: “People want to gamble after wishing for luck from the shrine.” /ee