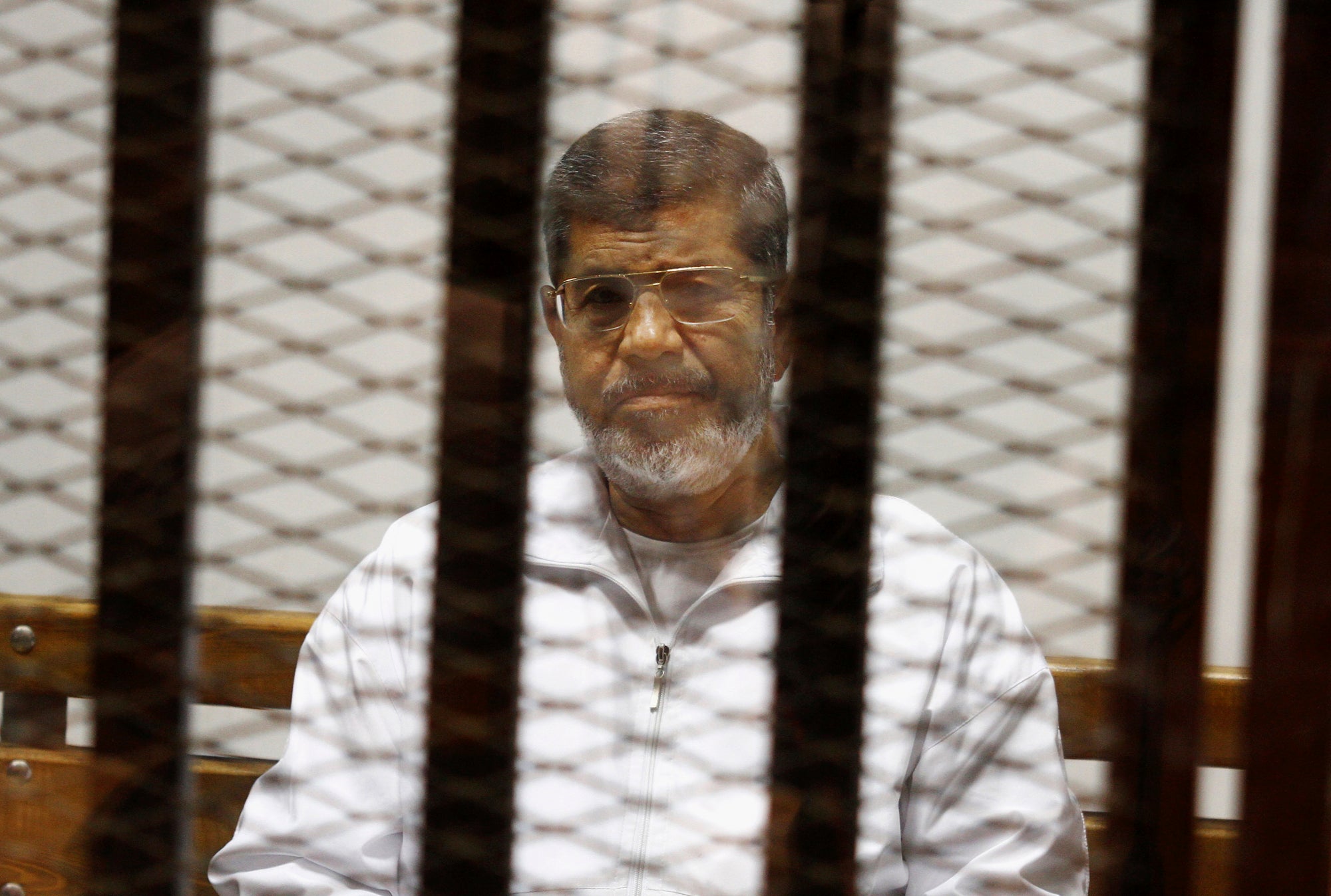 FILE – In this May 8, 2014 file photo, Egypt’s ousted Islamist President Mohammed Morsi sits in a defendant cage in the Police Academy courthouse in Cairo, Egypt. On Monday June 17, 2019, Egypt’s state TV said the country’s ousted President Mohammed Morsi, 67, collapsed during a court session and died. It said it occurred while he was attending a court trial on espionage charges. Morsi, who hailed from Egypt’s largest Islamist group, the now outlawed Muslim Brotherhood, was elected president in 2012 in the country’s first free elections following the ouster the year before of longtime leader Hosni Mubarak. (AP Photo/Tarek el-Gabbas, File)

CAIRO  — Egypt’s first democratically elected president, Islamist leader Mohammed Morsi, was buried under heavy security early on Tuesday, a day after his dramatic collapse and death inside a glass cage of a Cairo courtroom, a member of his defense team said.

Morsi’s family attended funeral prayers in the mosque of Cairo’s Tora prison, followed by the burial at a cemetery in the city’s western district of Nasr City, said Abdul-Moneim Abdel-Maqsoud, a member of Morsi’s defense team.

Morsi’s son, Ahmed, said security agencies refused to allow Morsi to be buried at the family’s cemetery in his hometown in Sharqia province.

Morsi, 67, hailed from Egypt’s largest Islamist group, the now outlawed Muslim Brotherhood, and was elected president in 2012 in the country’s first free elections following the ouster the year before of longtime leader Hosni Mubarak.

The military toppled Morsi in 2013 after massive protests and crushed the Brotherhood in a major crackdown, arresting Morsi and many others of the group’s leaders.

During his years in prison, Morsi, who was known to have diabetes, was often held in solitary confinement and was largely barred from receiving visitors. His family was only allowed to visit three times. While in detention, Morsi continued to appear in court on a range of charges.

Morsi’s Muslim Brotherhood on Monday accused the government of “assassinating” him through years of poor prison conditions. The group demanded an international investigation into Morsi’s death and called on Egyptians to protest outside Egypt’s embassy across the world.

Late Monday, Egypt’s chief prosecutor said Morsi’s body would be examined to determine the cause of his death. State TV, citing an unnamed medical source, said he died after suffering a heart attack.

Morsi collapsed Monday after just having addressed the court, speaking from the glass cage he was kept in during sessions and warning that he had “many secrets” he could reveal, a judicial official said.

In his final comments, he continued to insist he was Egypt’s legitimate president, demanding a special tribunal, one of his defense lawyers, Kamel Madour told The Associated Press. State TV said Morsi died before he could be taken to hospital.

It was a dramatic end for a figure central in the twists and turns taken by Egypt since its “revolution” — from the pro-democracy uprising that in 2011 ousted the country’s longtime authoritarian leader, Hosni Mubarak, through controversial Islamist rule and now back to a tight grip under the domination of military men.  (Editor: Mike U. Frialde)