NEW YORK – It was the escalator ride that would change history.

Four years ago on Sunday, Donald Trump descended through the pink marble and brass atrium of Trump Tower to announce his candidacy for president , the first step on a journey few believed would take him all the way to the White House.

It turns out the 2015 event might not have happened, at least not on June 16. 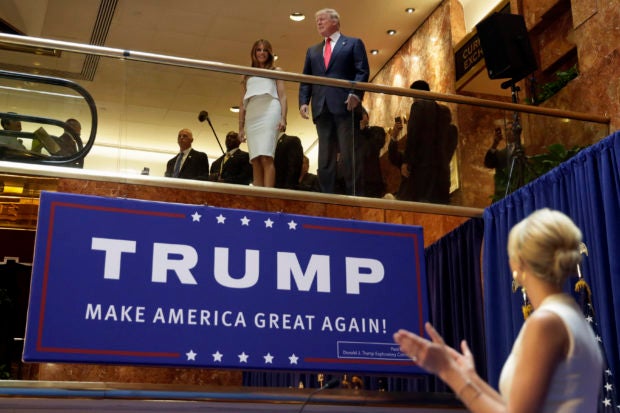 FILE – In this Sunday, June 16, 2015, file photo, Donald Trump, accompanied by his wife Melania Trump, is applauded by his daughter Ivanka Trump, right as he’s introduced before his announcement that he will run for president in the lobby of Trump Tower in New York. It was the escalator ride that would change history. Four years ago on Sunday, Donald Trump descended through the marble and brass atrium of Trump Tower to announce his candidacy for president. It was the first step on a journey few believed would take him all the way to the White House. (AP Photo/Richard Drew, File) 4 years in, Trump fondly recalls Trump Tower campaign launch

And the over-the-top staging that featured a crowd including paid actors could have been even more theatrical if one early idea hadn’t been scrapped.

(Trump nixed suggestions to feature a live elephant. “Too political,” he decided.)

Now, the president who loves to reminisce about that “famous” Trump Tower moment is trying to recreate the magic as he formally launches his re-election bid Tuesday in Florida.

Four years in, Trump still is echoing much of the same divisive rhetoric he let fly when he ditched the speech prepared for that original campaign kickoff.

His 2015 announcement, according to those involved in the effort, was a classic Trump production aimed at highlighting all the things that made Trump, well, Trump: his brashness, his wealth and his skill for lighting rhetorical fires and watching the press scramble to respond.

Trump had been in Europe playing golf the week before his scheduled announcement, with plans to return in time to go over remarks written by his ragtag team of early staffers.

“I get a call while he is in Europe and he asked, ‘What do you think about postponing this a little?'” recalled Sam Nunberg, an early campaign adviser. But the press already had been invited, trips to early-voting states planned and the timing — a day after assumed front-runner Jeb Bush’s announcement — seemed ideal.

And there was fear among advisers that any delay would trigger talk of cold feet about a campaign some observers doubted would ever happen because Trump had already flirted with, but then bailed on, previous bids.

“I tell him, ‘We can’t do that. We have set this date. If we postpone it, it would be covered that you got cold feet and you would not be taken seriously,'” said Nunberg. “I told him that postponing would be like Madonna not performing at MSG on a show day,” referring to New York’s Madison Square Garden.

So the show went on.

Trump and his wife, Melania, emerged from an upper level of Trump Tower and descended the “famous” escalator, with the future president offering thumbs-ups and waves.

It was a scene Trump had carefully crafted, paying frequent visits to the lobby as crews worked through the night to erect press risers, build the stage he would stand on and polish every inch of marble and brass.

A speech had been written. But Corey Lewandowski, Trump’s first campaign manager, wrote in his book, “Let Trump Be Trump,” that the candidate “gave a quick look at the sheet of paper Corey handed him, folded it up, and put it in his breast pocket, never to look at it again.”

“I never forget standing on the famous escalator, you know the escalator, right?” he likes to tell crowds. “Remember the scene with Melania in front of me waving very elegantly and Trump coming down, waving less elegantly? But I just took a deep breath and I said, ‘Let’s go do it. Let’s make this country great,’ because it takes guts. It takes guts. And I’m so glad I did it.” /gsg