Saving monuments of faith, relics of past

The Archdiocese of San Fernando has embarked on a restoration program for Pampanga’s heritage churches, the fifth such endeavor since the 17th century, after a strong earthquake hit the province on April 22.
By: Tonette Orejas - @ttorejasINQ
Philippine Daily Inquirer / 05:04 AM June 16, 2019 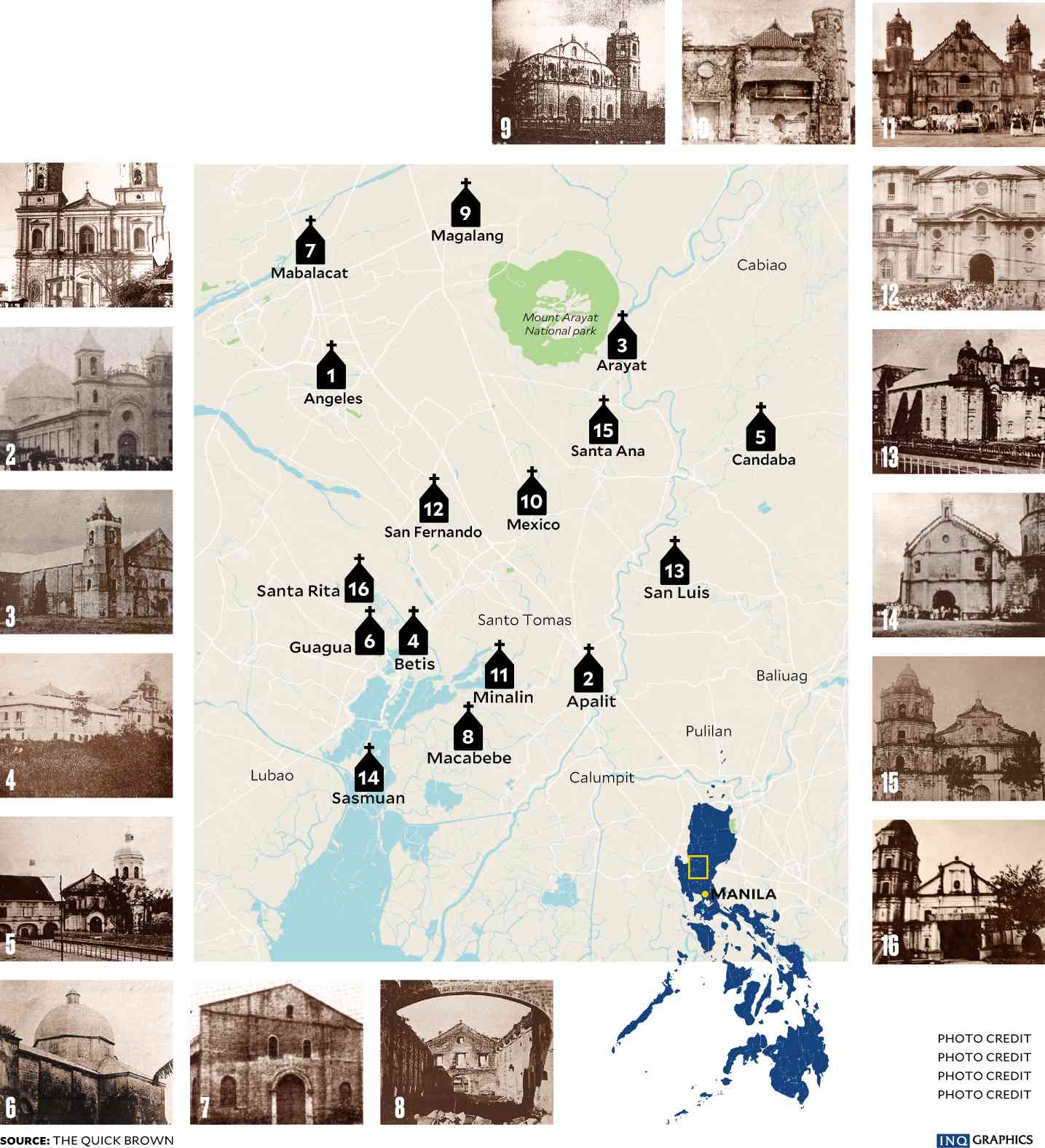 PORAC, Pampanga, Philippines — Teresita Ignacio was enjoying a massage on the second floor of a grocery building on April 22 when the floor felt like it was jumping up and down and then swinging from side to side — until the tiles cracked and objects fell.

Across from where she stood, she saw dust billowing from the collapsed Chuzon Supermarket. When it cleared, three floors were revealed to have been reduced to rubble.

“Then, sirens were noisy, rescuers were arriving,” recalled Ignacio, 59. “I was just thankful that I survived that earthquake.”

But her feeling of relief was soon overtaken by sadness. In her village, the 6.1-magnitude temblor caused the cement covering adobe blocks at Virgen Dolores chapel to crumble.

The two side altars fell; statues of saints were strewn on the ground. The chapel’s bell, dated 1834, hung still. In Santa Catalina de Alexandria parish in the town proper, the two floors of the four-story belfry caved in, leaving a bell, dated 1852, forlorn.

For Ignacio, a retired community organizer, old churches and chapels are not merely grand relics but are significant in the lives of the Catholic faithful.

“The chapel was where we evacuated when Mt. Pinatubo erupted [on June 15, 1991],” she said. “On top of religious rites, it’s where Alternative Learning System classes are held. We hold our seminars and training here. Students hold their recognition events here.”

Nine Spanish-era churches in Pampanga incurred damage, mostly cracks, according to an initial report to Rene Escalante, chair of the National Historical Commission of the Philippines (NHCP).

On April 23, the facade of Santa Monica Church in Minalin town, a national cultural property, was assessed to need steel braces.

On the same day, the Archdiocese of San Fernando (ASF) locked down the nine damaged churches and a Spanish military tower on the NHCP list and 14 other churches to allow time for safety assessments.

For two months now, Masses and other sacraments have been held under tents, in covered courts or basketball gyms.

Archbishop Florentino Lavarias prioritized the safety of the faithful in ordering the lockdown, according to Fr. Emil Guiao, director of the ASF’s Archdiocesan Committee on Church Heritage (ACCH).

Of the shuttered churches, 20 were established by Augustinian priests in their missions from 1572 to 1877. Two (in San Luis and Santo Tomas) were built by secular priests, another (in Mabalacat) by Recoletos, and yet another (in San Fernando) after the Filipino-American war.

But while none of these churches collapsed, the vertical cracks are signs of structural problems, Guiao said.

Some cracks are big, like those in the facade of San Agustin Church in Lubao town, the oldest church in the province.

But Pampanga churches were in varying stages of deterioration and preservation before the April 22 earthquake, Guiao said, citing the documentation conducted by ACCH after its founding in 2017.

For instance, the “palitada” (wall finishing) of Santa Monica Church was stripped off, baring the bricks that had turned to powder over time. The constant floods after Mt. Pinatubo’s 1991 eruption caused the floor to rise and washed away its wooden slabs.

Saints Peter and Paul Church in Apalit town had cracks in its wall.

The church in Macabebe was caving in due to liquefaction.

“The earthquake intensified the damage to our churches,” Guiao said, adding that experts were now determining the full extent of the destruction.

The ASF is embarking on a restoration program, the fifth such endeavor since the 17th century, according to Guiao.

An earthquake on Nov. 30, 1645, destroyed the original churches in Lubao, Bacolor and Mexico towns. They were rebuilt, but another earthquake on July 18, 1880, tore them down again.

At least 19 Pampanga parishes also rebuilt their churches from the ruins of the Filipino-American war. Their claims for damages in 1899 were partially paid or totally rejected, historian Francis Musni said, citing a rare book used for processing the claims in Congress.

The Mt. Pinatubo eruption and the series of lahar flows until 1995 buried churches wholly or by half. San Guillermo Church in Bacolor is the most photographed structure that endured nature’s violence.

The post-April 22 restoration intends to “ideally put back the churches in their original state or to a period to be decided by the faithful through their parish pastoral council,” Guiao said.

He said Archbishop Lavarias wanted Catholics to participate in the assessment, documentation, detailed engineering studies and crafting of their parishes’ conservation management plans.

The approval of the National Museum and of the NHCP, as well as funding, will have to be sought. The two agencies have declared two churches (in Betis and Minalin) national cultural treasures, and six churches (in Guagua, Angeles City, Magalang, Lubao, City of San Fernando and Calulut) important cultural properties.

“As much as possible, we are encouraging the faithful to take more responsibility for the restoration,” Guiao said.

The work has yet to start because the earthquake occurred during a reshuffle of priests, who by this time are still getting acquainted with their new parishes.

Except for Apalit that began its five-year restoration project in 2017, all parishes are just beginning to prepare for their plans that may stretch from five to 10 years.

ACCH has not even estimated the costs. To give an idea, restoration of the church in Apalit needs P20 million.

“Each church is unique,” Guiao pointed out.

“Restoration means technical intervention to correct deterioration and alterations,” she said. “Some of our heritage churches have been altered by parish priests unmindful of heritage conservation principles. Some alterations have been identified as the causes of the weakening of the structures, like applying cement over adobe blocks.”

Guiao said priests had been advised in a memo not to touch anything pending the approval of the proper authorities or agencies.

The ASF and the parishes will have to comply with the National Cultural Heritage Act (Republic Act No. 10066) as a legal framework for the restoration, he said.