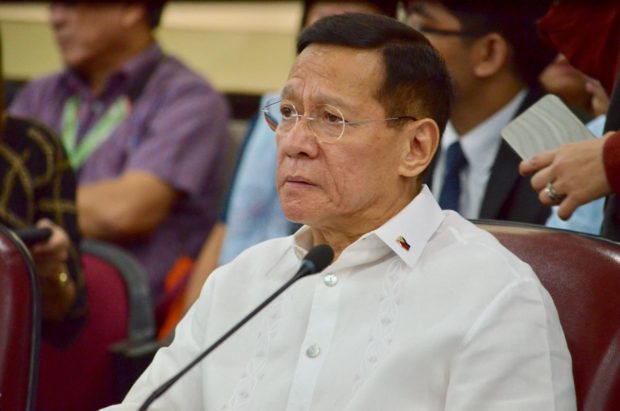 MANILA, Philippines – Health Secretary Francisco Duque III has reminded critics that the case against him for the alleged misuse of Overseas Workers Welfare Administration (OWWA) funds has long been dismissed.

Duque said on Friday that the issue, which was pointed out by Senator Panfilo Lacson in a previous tweet, has been resolved already after the Supreme Court (SC) ruled with finality in 2013.

“For the record and information of the honorable Senator Panfilo Lacson, this case was already dismissed by the Ombudsman in 2012 and dismissed with finality by the Supreme Court in 2013 due to the lack of evidence,” he said in a statement.

On Thursday, Lacson reminded President Rodrigo Duterte of Duque’s involvement in the OWWA issue, where funds sourced from overseas Filipino workers (OFWs) were used to purchase PhilHealth cards in 2004.

These cards were distributed by former President Gloria Macapagal-Arroyo before making her presidential bid in 2004.  Duque was then PhilHealth president.

READ: What Went Before: The Owwa fund transfer

Duque said that the same issue was raised during two confirmation hearings in the Senate — one as Civil Service Commission in 2010 and another as Health Secretary in 2018.

However, he noted that Lacson, a member of the Commission on Appointments, agreed that the issue was immaterial to his appointment.

“The Commission of Appointments, which Senator Lacson was a part of, agreed that these claims are baseless and consequently approved my appointment as Health Secretary,” Duque said.

Aside from raising the OWWA issue, Lacson also said he was confused why a different standard was used for Philippine Health Insurance Corp (PhilHealth) board officials who were asked to resign and Duque, who as Health secretary is also PhilHealth chair.

It was Duterte who called for the officials’ resignation after a Philippine Daily Inquirer report revealed that a dialysis facility in Quezon City allegedly received claims from PhilHealth even if the dialysis patients were already deceased.

Duque hopes that these issues would die down as the courts have already decided on the case.

“I have been in public service for more than two decades and I have never been convicted of any wrongdoing, simply because I hold integrity as my core principle,” he added. (Editor: Jonathan P. Vicente)

Read Next
Bato, Pimentel funded Senate bid for less than P100M
EDITORS' PICK
New strategies urged to improve public transport
Chaos as thousands return to work in Metro Manila
Cherry Mobile teams up with Cloud Panda PH, launches online store
Leveling up your ‘lutong bahay’ with the kitchen companion you never knew you needed
Senate OKs on 3rd reading bill allowing school opening after August
Someone from the Philippines can become $356 Million richer this Tuesday
MOST READ
‘If I had not been SolGen, I will make you eat your words,’ Calida tells Coco Martin
51 percent of German firms holding back investments in PH, but not because of COVID-19
Chaos as thousands return to work in Metro Manila
Restaurant dine-in operations approved in MGCQ areas
Don't miss out on the latest news and information.