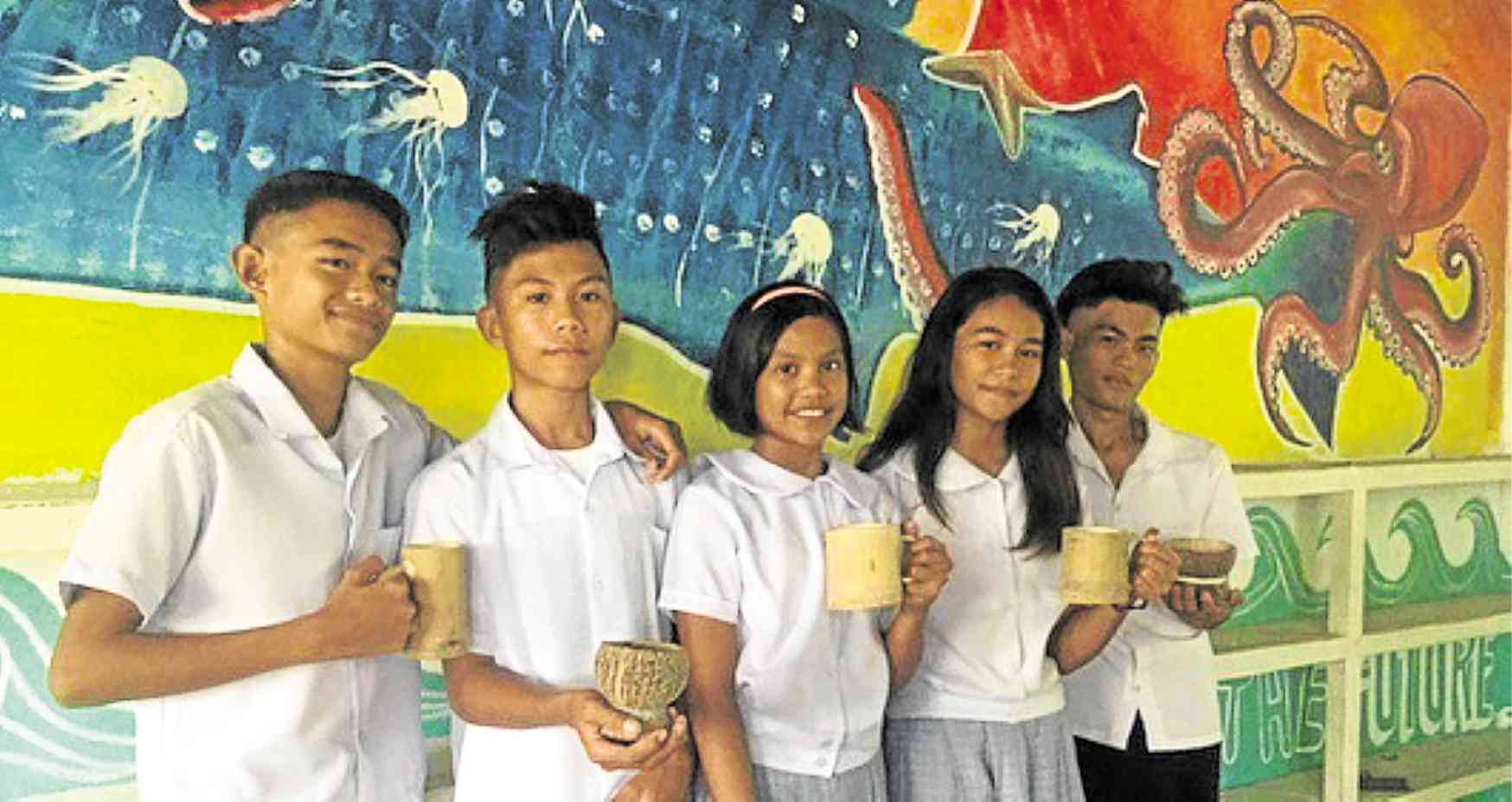 REUSABLE Students of Bulata National High School in Cauayan, Negros Occidental, use indigenous bowls and cups during meal breaks at their “no waste” canteen. —PHOTOS COURTESY OF PRRCFI

BACOLOD CITY—The campaign to promote a plastic-free culture is gaining ground in Negros Occidental province, with one high school going the extra mile.

With the use of biodegradable, indigenous and reusable materials, teachers and students at Bulata National High School in Cauayan town have produced mugs made from bamboo, bowls from coconut shells and plates from banana leaves for their “Wala Usik” (No Waste) canteen, in time for the opening of classes.

Their principal, Eiggy Duller Yap, said he was inspired to take action after attending the Marine and Wildlife Camp organized by the Philippine Reef and Rainforest Conservation Foundation Inc. (PRRCFI) on Danjugan Island in Cauayan in April.

The island is also under the care of the PRRCFI, which aims to promote awareness on biodiversity protection by means of ecotourism.

Yap, 31, said he was inspired by the Wala Usik stores and decided his school could also do its share to curb the proliferation of plastic through a Wala Usik canteen.

“[I was thinking] why not adopt this model, and reduce plastic waste at the source, and at the same time promote what’s local? Imagine if all school canteens in the Philippines become wala usik,” he said.

In schools nationwide, single-use plastic is often mismanaged and causes problems to the environment as well as public health.

Thus the creation of biodegradable, indigenous and reusable mugs, bowls and plates for use at the canteen to eliminate plastics, Yap said.

The canteen will promote a “zero-waste” or “nothing-is-wasted” and plastic-free culture in offering meals and snacks for its more than 400 students and teachers. 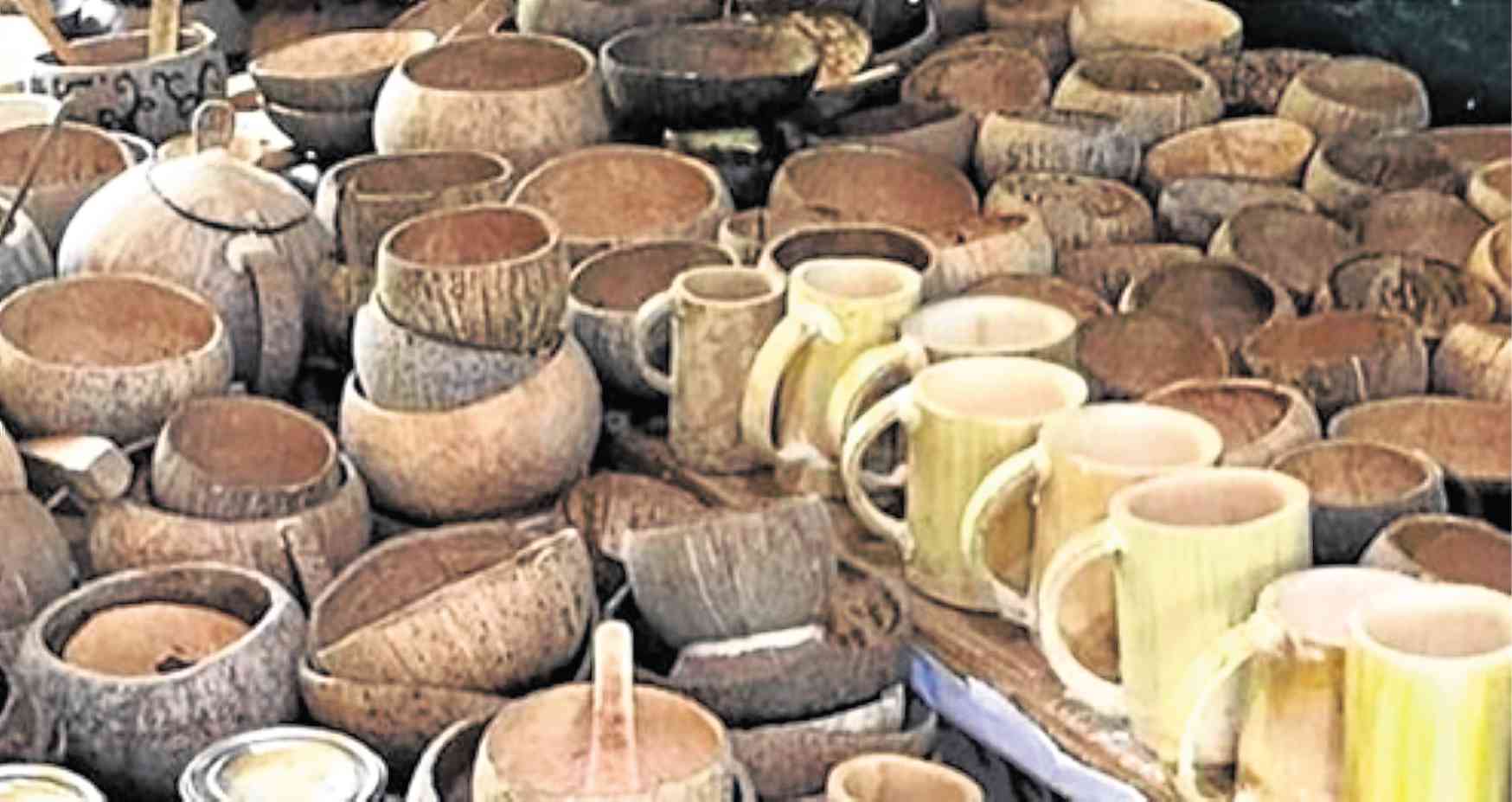 At a recent Parent-Teacher Association meeting, Yap also encouraged parents to adopt the same practice in their homes.

“The parents really love the idea,” he said.

Yap also hoped their creations could also become a livelihood endeavor for students in the future.

The wall painting was done by volunteers from the Association of Negros Artists (Ana), paying homage to the rich biodiversity of Cauayan waters, and the Danjugan Island marine reserve and sanctuaries in Barangay Bulata.

“We have received requests to replicate. It only shows there is already a wide consciousness on the negative effects of plastic waste mismanagement, and a desire to take action no matter how small-scale. We hope more schools and communities innovate on how to be wala usik,” Albao said.

“Mismanaged plastic waste does not only clog drains and cause floods, it can kill marine life or disintegrate into microplastics that threaten the very food chain we also depend on,” he said, adding that “scientists have predicted that there will be more plastic than fish in the ocean by 2020.”

Albao said the Wala Usik movement is also about social enterprise on economy where “nothing is wasted and there’s value to any byproduct.”

Read Next
Avoid demos, HK Pinoys asked
EDITORS' PICK
Diokno to Duterte: OK to make fun of buck tooth, but focus on people’s needs first
10 Filipinos positive for COVID-19 in UK, 7 in Ireland — envoy
IATF to LGUs: Issue ordinances vs attacks on frontliners, COVID-19 patients
Robredo spox thanks Duterte for defending VP’s efforts vs COVID-19
Quick chat with Nicole Andersson: ‘You really don’t need much to be happy’
Nograles: Cabinet members to donate 75% of monthly salary to aid COVID-19 fight
MOST READ
Coronavirus hotbed Rizal to shut borders on April 6
Gov’t mulling quarantine period extension of 15-20 more days
Sotto on Isko Moreno’s call: We do our job without the media following our every move
Cebu records no new COVID-19 case in past 2 days
Don't miss out on the latest news and information.