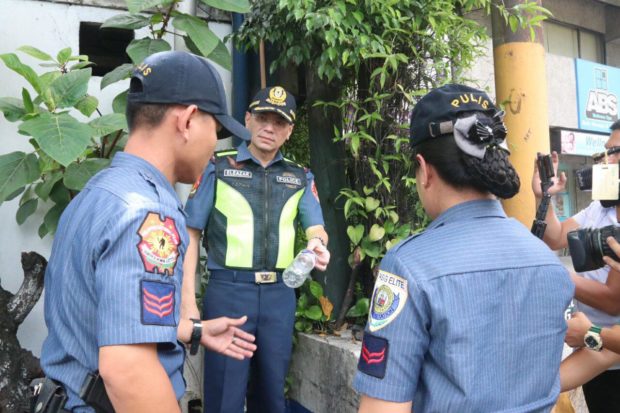 In a text message to INQUIRER.net Thursday, Eleazar said he removed Capt. Eleno Ilustrisimo, commander of the Pasig City Police Community Precinct-1 (PCP-1), after conducting surprise inspection at the station on Wednesday.

“‘Di pansinin na meron doong kalat. Meaning, di nila tinitingnang mabuti. Nasa plant box ‘yon sa labas ng office (They may not have noticed it, which means they do not give it careful attention. It’s in that plant box outside the office),” he said.

According to Eleazar, his latest inspection at the precinct was a follow-up to his first visit on May 24 where he found a “similar dirty surroundings” inside the police office.

“Inayos naman at much improved [compared to the first inspection]. Pero meron pa ring naiwan [na kalat] (They fixed it, and the situation has improved. But some garbage remained),” the police official said.

In a report to Eleazar dated May 29, Ilustrisimo had ordered his subordinates to clean the precinct and was even seen leading physical exercises to instill discipline and emphasize the internal cleansing being waged by the Philippine National Police.

Eleazar denied that he found empty bottles of liquor at the precinct during the inspection.

He said he also conducted random inspections at precincts in Taguig and Makati on Thursday, and that he regularly inspects police stations covered by the NCRPO.

“We have 187 PCPs, [and] I want to maintain [its] exaggerated cleanliness, including their surroundings,” he said. (Editor: Eden Estopace)

ADVERTISEMENT
Read Next
NBI probes ‘all entities’ seeking refunds from PhilHealth
EDITORS' PICK
World-standard accounting: Unlocking your financial potential
Water remains our saving grace right now
Defend Your Health! Shop health essentials from home with Rose Pharmacy’s Online Sale
COVID-19 wards in 2 more hospitals reach full capacity
Navotas will be on lockdown from July 16 to 29 – Tiangco
Chatting with companions, answering calls on MRT 3 trains banned
MOST READ
‘I am not my father,’ says daughter of lawmaker who voted to deny ABS-CBN franchise
In slap on face of PH, China replies to Locsin on tribunal ruling: It’s invalid
Vilma Santos-Recto ‘prepared’ to face ‘consequences’ over ABS-CBN franchise vote
Did a meme get on Agot Isidro’s nerves? She’s asking ’24 Oras’ to fact-check it
Don't miss out on the latest news and information.