At a Houston fundraiser, Biden joked about the infamous expletive he deployed in congratulating Obama’s health care victory.

And Biden recently tweeted an image of Joe and Barack friendship bracelets.

The message is clear: Biden really wants you to know he’s still friends with Obama. 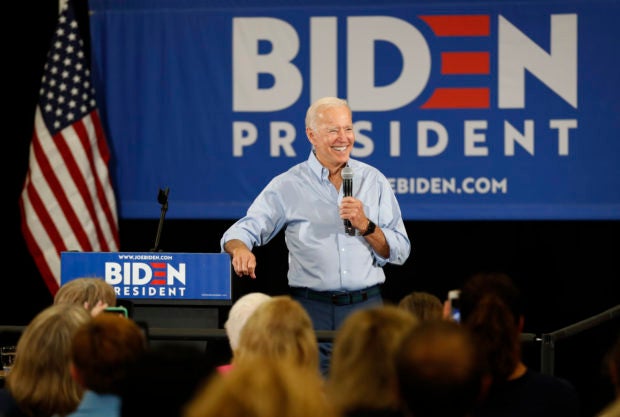 He’s betting that by dangling nostalgia for the Obama years before Democrats, he can help rebuild the diverse national coalition that twice propelled Obama to victory.

Obama hasn’t backed any of the two dozen Democrats running for president, and Biden’s advisers insist that his 2020 bid is his own.

But for now, Obama is playing a starring role in Biden’s message.

“It’s a nomination strategy, and it’s pretty rich in its benefits,” David Axelrod, Obama’s chief political strategist, said of Biden’s frequent references to Obama. “The fact that he had Obama’s back is particularly meaningful to African American voters. And I think if he gets this nomination that is going to be the reason why.”

Seven weeks after launching his campaign, the 76-year-old leads his party’s crowded presidential field with virtually every key demographic, including African Americans, who play a critical role in the nomination process. Some prominent Democrats believe that Biden’s connection to the nation’s first black president may be why.

But some skeptics believe Biden’s early success is simply a reflection of his fame and will crumble under more scrutiny.

“He’s assuming that being associated with Barack Obama will bring him the Barack Obama coalition — a multiracial coalition,” said Aimee Allison, founder of She the People, a national network focused on women of color. “It just simply doesn’t translate.”

On the ground in South Carolina, where African Americans dominate the first Southern primary, state lawmaker Gilda Cobb-Hunter said Biden’s association with Obama may be effective in winning over older African American voters. But it’s going to take much more to stand out among a talented Democratic field over the long term, she said.

“If that’s his whole game, he’s going to have to step his game up,” said Cobb-Hunter, who serves as the president of the National Black Caucus of State Legislators.

“The voters deserve more than that,” said Turner, who is African American.

“I have yet to hear one person say they’re going to vote for somebody because of a relationship they had with Barack Obama. If anything, that notion is insulting,” she said. “The question is what you’re going to do for the black community when you have the power in the face of a recalcitrant GOP.”

Although he has not endorsed a candidate, Obama issued a statement through a spokeswoman upon Biden’s entry into the campaign noting, “President Obama has long said selecting Joe Biden as his running mate in 2008 was one of the best decisions he ever made”— a plug from the popular former president no other candidate can boast.

Similarly, no other candidate can claim having handled delicate administration functions, such as administering the roughly $800 billion American Recovery and Reinvestment Act, which was credited with creating millions of jobs at a time the U.S. economy was in crisis.

“I was proud to work with him together on the Recovery Act, which kept us going into a depression in my view and the view of a lot of economists,” Biden told the audience in Davenport, prompting a swell of cheers.

Biden’s team suggests his message is about much more than Obama.

Indeed, Biden in recent weeks has released detailed policy prescriptions for education and the environment.

He’s also outlined his own rationale for running, which centers on the rise of white supremacy and hate under President Donald Trump’s leadership.

Yet Biden’s advisers say he cannot ignore his experience in the White House, which helps him stand out in a far less experienced Democratic field.

Biden talks about his service as vice president and his relationship in front of every audience because “it’s a critical part of who he is,” said Biden adviser Anita Dunn, who also previously worked for Obama.

“It was a genuinely close relationship and it continues. They definitely have stayed in touch,” Dunn added, noting that they shared “eight years of accomplishment, eight years of battles to do what was right for the American people, eight years of shared values.”

Biden pollster John Anzalone noted that Biden and Obama shared some major accomplishments, but he said, “It’s important that from Day 1, Joe Biden has laid out his own vision, his motivation for getting into the race, why he’s running and what he wants to do.”

“This is wholly Joe Biden’s own run,” Anzalone said.

Back in Iowa on Tuesday night, Biden reflected on the successes he shared with Obama, including the rescue package that saved the American auto industry from financial ruin. He drew the biggest applause of the day when he compared Obama’s character to Trump’s.

“Barack Obama was a president of extraordinary character and decency,” Biden said as hundreds of Democrats leapt to their feet. “For eight years, there wasn’t one single hint of scandal.” /gsg