MONTEVIDEO, Uruguay – Rolando Bustamante watches his employees turn out one concrete block after another, occasionally checking an electronic tablet that records orders from clients and that lets him communicate with suppliers.

There’d be nothing remarkable about the scene if it weren’t for the fact that the block factory is located in a prison and that Bustamante, in addition to being a businessman, is on the last two years of a 21-year sentence for assault.

The workers, too, are inmates and the product will be sold beyond the walls, with part of the profits going to a sort of bank run by the prisoners themselves. 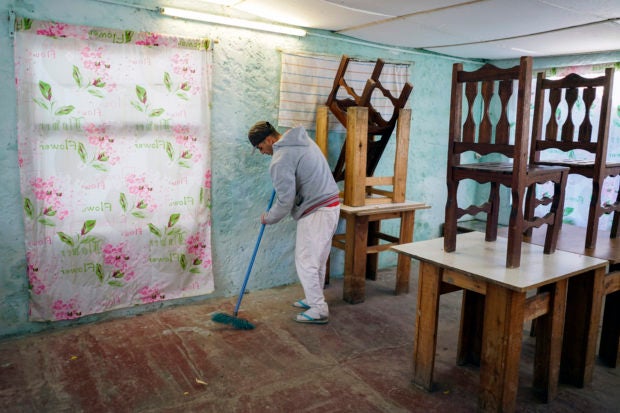 In this May 23, 2019 photo photo, an inmate sweeps the restaurant where he works, at the Punta de Rieles prison in Montevideo, Uruguay. Punta de Rieles prison has been transformed into an unusual experiment. Inmates form businesses, work for one another and offer products both to the world within the walls and to that without. (AP Photo/Matilde Campodonico)

Bustamante’s factory is one of dozens of inmate businesses in the old Punta de Rieles prison, which has been transformed into an unusual experiment.

Inmates form businesses, work for one another and offer products both to the world within the walls and to that without.

There are bakeries and barbershops, a candy store and carpenter shop along streets where inmates mix with prison officials and police.

One inmate carries a begonia he bought from a prisoner-owned nursery to give to his mother when she visits.

Not far away, a convict-baker carries a birthday cake to the prison entrance to hand off to a customer. 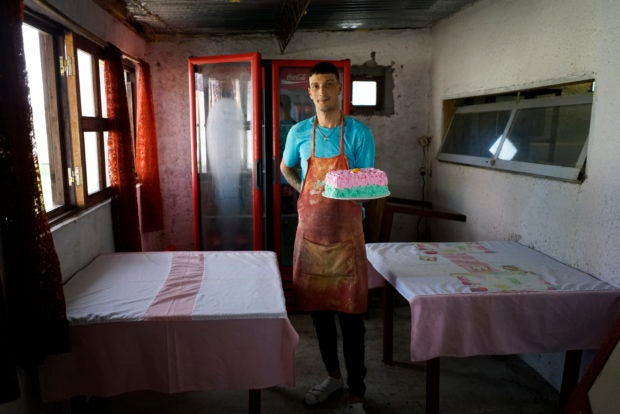 In this May 18, 2019 photo, inmate Nelson Avantti, who runs a bakery inside the Punta de Rieles prison, holds a cake at his bakery at the prison in Montevideo, Uruguay. Money to start businesses like Avantti’s comes from inmates’ families or from a quasi-bank largely administered by inmates themselves. (AP Photo/Matilde Campodonico)

Of the 510 prisoners, who include thieves, assailants, kidnappers and killers, 382 work and 246 study — some do both.

Only a few dozen have shunned those opportunities, and if two years pass, they will be transferred to a traditional prison.

To get chosen for Punta de Rieles, prisoners have to have at least a six-month period of good behavior elsewhere.

The prison director is almost as unusual as the institution itself.

Luis Parodi was a member of the Tupamaro guerrilla movement that was defeated in 1972. He later spent more than a decade in exile, both in Europe and Latin America.

Asked if there are other prisons in the world of this type, he said, “I don’t think so, I’m afraid to say. This is the synthesis of 30 years of work, reading, experiences and failures.”

The Punta de Rieles project began in late 2012, with Parodi as deputy director, and he took over as head of the prison in 2015.

The bet is that prisoners who work, study, learn a craft or start a business will have a better life and be less likely to return to crime.

“It’s been demonstrated everywhere that confinement doesn’t change people. Here the idea is to play at reality,” Parodi said.

“If something  fails, it fails. Just like in the real world.”

Money to start businesses comes from inmates’ families or from a quasi-bank largely administered by inmates themselves.

“It’s a fund so that entrepreneurs can get started, that you have the hope of change. Many of us have taken advantage of the opportunity and we’re getting ahead,” Bustamante said.

Ten percent of the profits go back to that fund, another 10% goes to the government for use of the facilities and 10% goes to an association of victims of crime.

The rest goes into accounts for the inmates, though they can’t fully access it until they are released.

Bustamante said he was skeptical when he was transferred from another prison and was dumped off at Punta de Rieles by a police van almost five years ago.

“I saw stores, businesses, and I thought, ‘Where am I?’ Later it clicked in my head,” he said. “In common prisons, you continue in a world of violence, thinking about who is going to attack you and how to survive. You can’t do anything. A 2-by-2 cell, and locked up all day,” he said. /gsg

Read Next
PACC clears Piñol of corruption
EDITORS' PICK
Smart releases Hyun Bin’s second TVC
Current dominant strain of COVID-19 more infectious than original—study
Water remains our saving grace right now
DOLE: Return of OFWs’ remains from Saudi to be ‘delayed,’ deadline moved to ‘early next week’
‘Justice will be done,’ Duterte assures as he vowed probe on Jolo incident to bare ‘truth’
EuroMillions Superdraw: A lottery draw unlike any other is coming to the Philippines
MOST READ
Duterte tells military: No other president looked at you the way I did
BREAKING: Duterte signs anti-terror bill into law
Locsin warns of ‘severest response’ if China’s army drills in SCS ‘spill over’ to PH domain
Vico: Cleanup of bidding process saved Pasig gov’t P415M
Don't miss out on the latest news and information.