HONG KONG – Hong Kong delayed a legislative session on a contentious extradition bill as thousands of protesters amassed to block entry to the building Wednesday out of concern the measure signaled greater Chinese control and further erosion of civil liberties in the semiautonomous territory.

The overwhelmingly young crowd of demonstrators filled nearby streets, overturned barriers and tussled with police outside the government headquarters and offices of the Legislative Council. 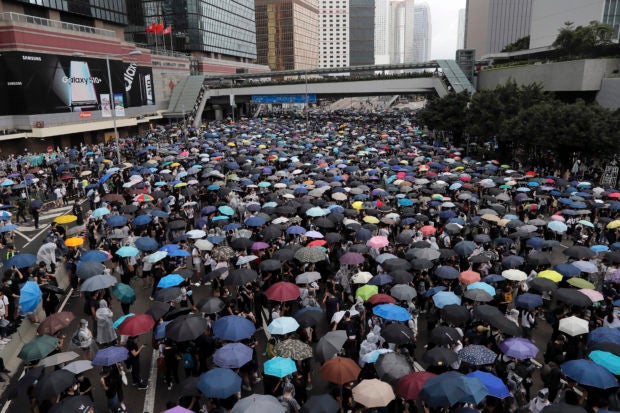 Protestors gather near the Legislative Council in Hong Kong, Wednesday, June 12, 2019. Hundreds of protesters surrounded government headquarters in Hong Kong on Wednesday as the administration prepared to open debate on a highly controversial extradition law that would allow accused people to be sent to China for trial. (AP Photo/Kin Cheung)

A statement from the government’s press service said the session of the Hong Kong’s Legislative Council that was scheduled to begin at 11 a.m. would be “changed to a later time to be determined” by the council secretariat.

Council members would be notified of the time of the meeting later, the statement said.

A protester who gave only his first name, Marco, said he hoped the action would persuade Chief Executive Carrie Lam’s administration to shelve the proposed amendments to the Fugitive Offenders Ordinance and the Mutual Legal Assistance in Criminal Matters Ordinance.

“We want the government to just set the legislation aside and not bring it back,” he said.

A fellow protester who gave her name as King said the protest was a watershed moment for Hong Kong’s young generation, who face difficult job prospects and skyrocketing housing prices.

“We have to stand up for our rights or they will be taken away,” she said.

The reluctance of protesters to be identified by their full names and professions — many wore surgical masks to obscure their facial features — reflected an increasingly hard-line approach to civil unrest by the authorities.

Such actions are never tolerated in mainland China, and Hong Kong residents can face travel bans and other repercussions if they cross the border.

Another statement from the government’s information office said access roads leading to the Central Government Offices were blocked and police has implemented traffic arrangements.

Staff members were advised not to go to into work and those already on the premises were told to “stay at their working place until further notice.”

Under its “one country, two systems” framework, Hong Kong was supposed to be guaranteed the right to retain its own social, legal and political systems for 50 years following its handover from British rule in 1997.

However, China’s ruling Communist Party has been seen as increasingly reneging on that agreement by forcing through unpopular legal changes. /gg