MANILA, Philippines – President Rodrigo Duterte urged Filipinos on Wednesday to ensure that  a “truly independent Philippines’  is realized within their lifetimes as the nation marks its 121st Independence Day.

“A hundred and twenty-one years has passed since our forefathers bound their fates, their lives and their fortunes to proclaim the independence of the Filipino people,” Duterte said in his Independence Day message. 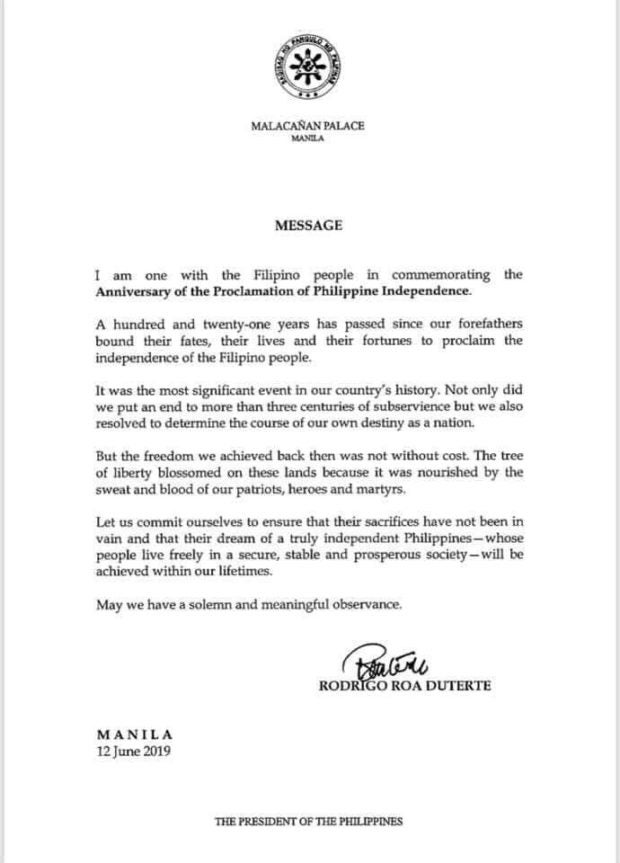 “It was the most significant event in our country’s history. Not only did we put an end to more than three centuries of subservience but we also resolved to determine the course of our own destiny as a nation,” he added.

The President called on Filipinos to honor the sacrifices of their forefathers.

“But the freedom we achieved back then was not without cost. The tree of liberty blossomed on these lands because it was nourished by the sweat and blood of our patriots, heroes and martyrs,” he said.

“Let us commit ourselves to ensure that their sacrifices have not been in vain and that their dream of a truly independent Philippines – whose people live freely in a secure, stable and prosperous society – will be achieved within our lifetimes,” he added.

The President is scheduled to lead the Independence Day celebration at the 6IB Headquarters in Lanao del Sur. (Editor: Gilbert S. Gaviola)