Police, protesters face off ahead of Hong Kong law debate

HONG KONG – Government officials in Hong Kong are bracing for a showdown as protesters and police continue to face off into the early morning hours outside the semiautonomous Chinese territory’s legislature ahead of Wednesday’s debate over changes allowing extradition to the Chinese mainland.

Opponents of legislation that would allow criminal suspects to be extradited to mainland China started gathering outside the Legislative Council Tuesday night with further demonstrations and labor strikes expected. 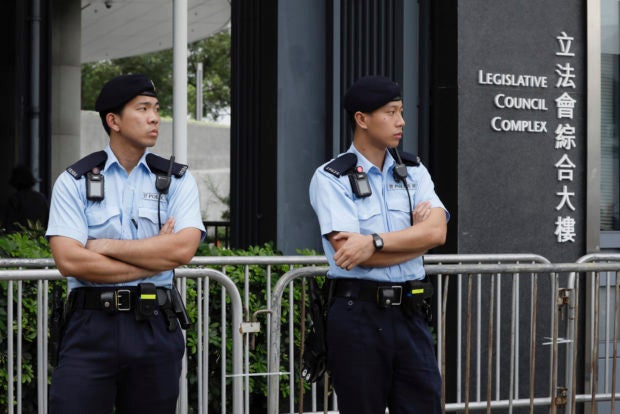 The demonstrators hope to block or delay passage of the amendments to two extradition laws which they say endanger the territory’s judicial independence and Western-style freedoms.

The government plans to present the amendments to the legislature on Wednesday, despite a weekend protest by hundreds of thousands of people that was the territory’s largest political demonstration in more than a decade.

The legislation has become a lightning rod for concerns about Beijing’s increasing control over the former British colony, which had been promised it would retain its own legal and social institutions for 50 years after its return to Chinese rule in 1997.

“We’re young but we know that if we don’t stand up for our rights, we might lose them,” said an 18-year-old protester who gave only her first name, Jacky.

Police called in reinforcements and closed off access to the area around the Legislative Council and government headquarters, patrolling in the heat and humidity but without any immediate conflict with protesters.

Jimmy Sham, convener of the Civil Human Rights Front that organized Sunday’s protest, said his group is prepared to keep fighting to defeat the legislation.

“We will use our people to surround the Legislative Council, starting from tomorrow,” Sham said Tuesday.

Hong Kong’s leader, Chief Executive Carrie Lam, has consistently defended the legislation as necessary to close legal loopholes with other countries and territories.

The legislature’s president, Andrew Leung, has scheduled a vote on June 20.

Police closed off streets surrounding the legislature and government headquarters amid online calls for protesters to gather and show their opposition. Local media reports said thousands of additional officers were being mobilized to keep order.

The scene outside of the building was tense but calm as officers in riot gear were met by crowds of protesters. Some demonstrators were dozing off as the night wore on.

One waved the flag of the United Kingdom in front of a line of police vans.

The Hong Kong government said its Legislative Council Complex will remain on Amber alert Wednesday, with services including the guided tours, library, archives, children’s area and cafeteria suspended through the day.

Some businesses announced plans to close Wednesday and there were scattered reports of students planning to boycott classes. Rain was forecast overnight Tuesday into Wednesday, possibly reducing the size of crowds.

Sunday’s protest was widely seen as reflecting growing apprehension about relations with the Communist Party-ruled mainland, whose leader, Xi Jinping, has said he has zero tolerance for those demanding greater self-rule for Hong Kong.

Critics believe the extradition legislation would put Hong Kong residents at risk of being entrapped in China’s judicial system, in which opponents of Communist Party rule have been charged with economic crimes or ill-defined national security offenses, and would not be guaranteed free trials.

Lam, who canceled her regular question and answer session on Wednesday, said the government has considered concerns from the private sector and altered the bill to improve human rights safeguards.

She emphasized that extradition cases would be decided by Hong Kong courts. /gg