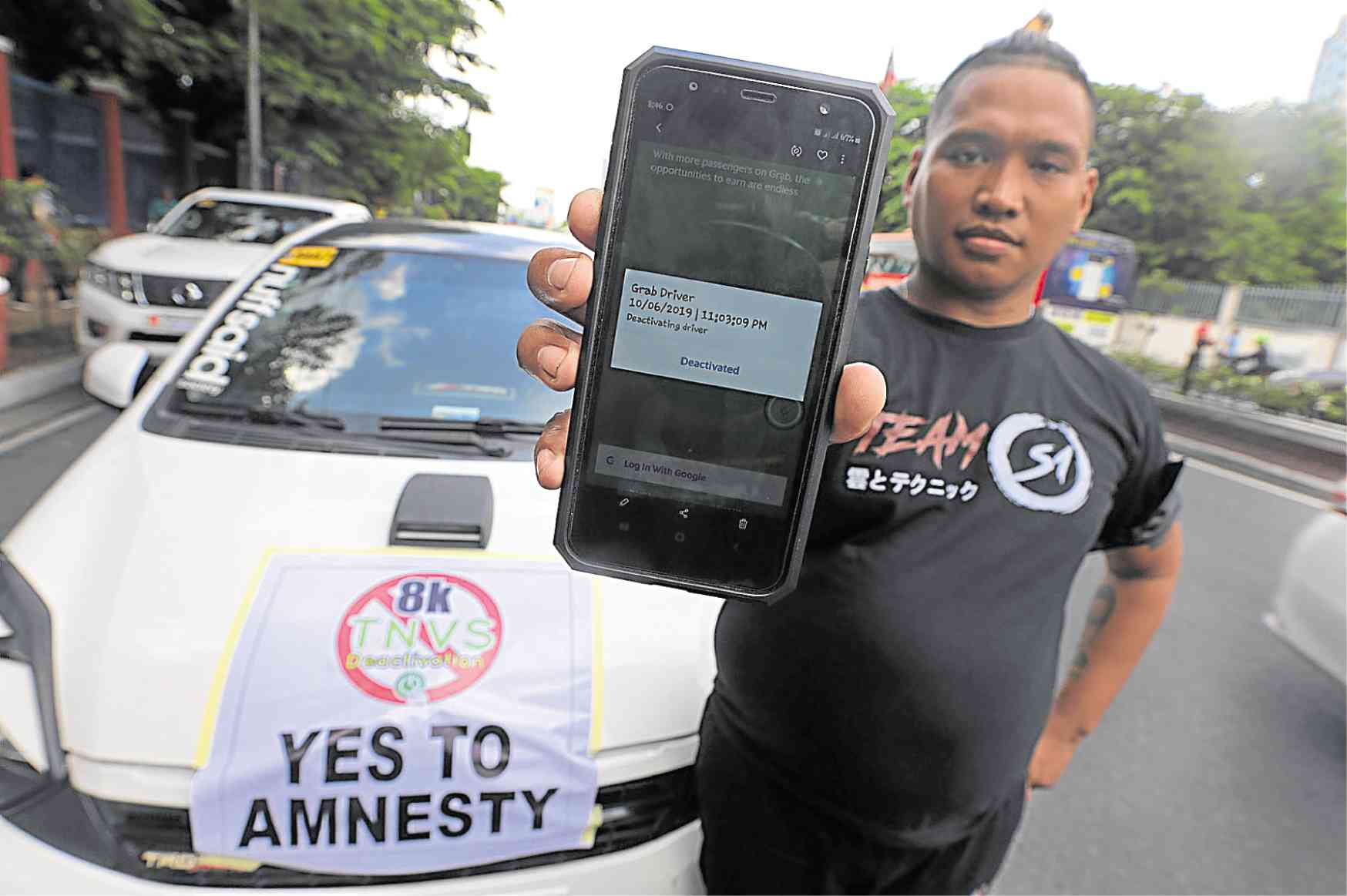 DEACTIVATED. Jharomier dela Cruz shows the deactivation notice he received from Grab which has taken off its platform 5,000 drivers who failed to apply for a franchise. The affected drivers held a rally on Tuesday in front of the LTFRB office. —GRIG C. MONTEGRANDE

MANILA, Philippines — Ride-hailing giant Grab told the Land Transportation Franchising and Regulatory Board (LTFRB) during a hearing on Tuesday that it deactivated 5,000 “colorum” drivers, not 8,000 as it earlier reported, on June 10.

The figure does not include the 10,000 other drivers it has removed from its platform since January for failing to renew their franchise, it added.

The deactivation of the 15,000 colorum drivers has led to longer booking periods for passengers due to fewer available rides, Grab country president Brian Cu said.

He also clarified that only 5,000 drivers — not 8,000 — were deactivated on Monday after 3,000 proved they were operating legally.

Outside of the 15,000 who were deactivated after they failed to apply for a provisional authority or a certificate of public convenience with the LTFRB, nearly 1,000 others had also been removed for bad behavior, Cu said.

Grab officials were called to a hearing by the LTFRB to explain why the transport network company (TNC) had so many colorum drivers.

Cu explained that a large-scale deactivation was made possible only after the LTFRB provided them on May 7 with a master list of all the Grab drivers who had complied with the agency’s requirements.

“We then took that list and compared it against active drivers in our system. We gave all our drivers a week … to resubmit proof and documentation that they had indeed applied for a franchise from the LTFRB,” he said.

The LTFRB opened 10,000 new transport network vehicle service (TNVS) slots on Monday and Grab officials expressed hope that within two weeks, there would be new drivers to address the shortage in available rides.

The TNC, which continues to dominate the ride-hailing industry in the Philippines, said it would try to restructure its incentives over the next week to minimize the effects of the deactivation, including offering benefits for drivers to operate longer hours.

According to Cu, between 40,000 and 45,000 Grab drivers have been operating on a monthly basis since the start of the year.

“Customers have been growing but TNVS franchise holders have not,” he said. “Those who registered in new slots were just enough to replace the partners [who] decided to stop driving.”

After the hearing, LTFRB chair Martin Delgra III said the transport board would also monitor whether other TNCs had complied with its order to remove colorum drivers.

MiCab, Hirna, Hype, Owto and GoLag are other TNCs accredited by the agency, but Grab has retained a virtual monopoly on the industry after Uber’s exit in 2018.