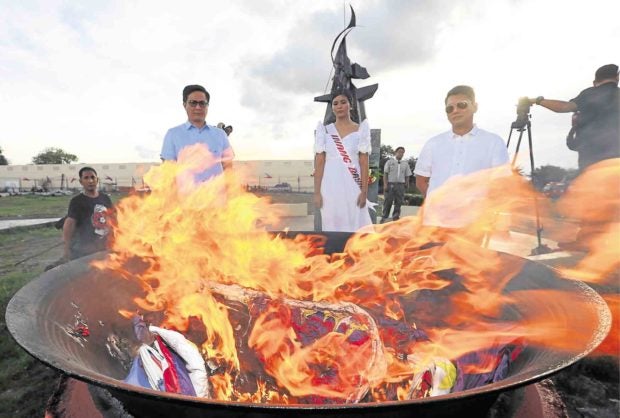 FLAG CREMATION Officials of Imus City in Cavite province lead a cremation ceremony to honor old Philippine flags that the local government has collected and stored since 2007. —EDWIN BACASMAS

At sundown on Tuesday, 5,000 old, torn and faded Philippine flags were burned in Cavite province, in a solemn rite meant to give “final honors” to the national symbol.

Republic Act (RA) No. 8491 states that worn-out flags “shall not be thrown away” but “shall be solemnly burned to avoid misuse or desecration.”

Other government offices and municipalities, such as Kawit, also in Cavite, where Philippine independence was proclaimed 121 years ago, had done so in the past.

As part of the ceremony, the Imus government lowered a worn-out, 3-meter-by-6-meter (10-foot-by-20-foot) banner in a flag retreat ceremony at Heritage Park in Barangay Alapan, the site of the May 28, 1898, battle between Filipino and Spanish forces where Emilio Aguinaldo first displayed the Philippine flag.

As this happened, melancholic, patriotic songs were played.

A woman, who played Inang Bayan (Motherland), appeared “mournful” as young scouts handed to her the folded flag.

Doused with fuel, the flag was burned in a 1-meter (3-foot) diameter steel “kawa” (cauldron). Its ashes were collected in an urn and buried a foot deep.

Saquilayan said the rest of the 5,000 flags, collected and stored since Imus revived the Banderada or the Wagayway Festival in 2007, would be burned in the same cauldron throughout the night.

By Wednesday, as the nation commemorates Independence Day, a new flag will be hoisted at Heritage Park.

Banderada, first introduced by Aguinaldo in the 1950s, showcased the parade of flags and simultaneous raising of the Philippine symbol.

In keeping with this tradition, the city government has to provide around 5,000 flags of various sizes to public offices and residents each year.

Asked about possible environmental impact of burning flags made of nylon, Saquilayan said they were taking note of that, too, but had to follow the law.

“[That’s a] point taken. Maybe next year, we could just bury [and skip the burning]? But there has to be [amendments] made to the law first,” he said of the 1998 code.

There were proposals in Congress to amend RA 8491 although these were mostly about imposing tighter penalties for violating the law.