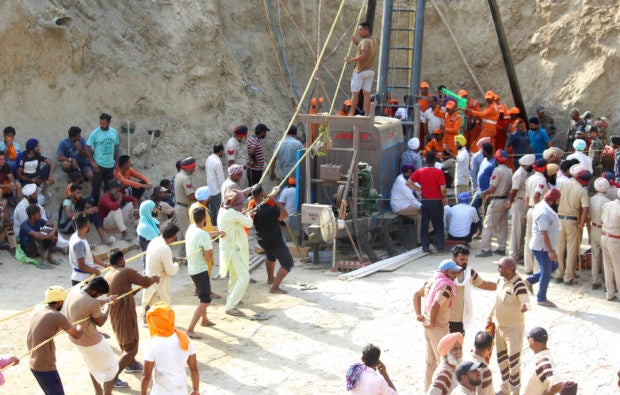 In this June 10, 2019 photograph, people try to rescue a 2-year-old boy who fell deep into an unused village well in Sangrur, Punjab state, India.  AP

NEW DELHI — A 2-year-old boy who fell deep into an unused well in an Indian village has been confirmed dead after rescuers worked nearly 110 hours to reach him, a hospital official said Tuesday.

The boy was removed from the well on Tuesday but doctors at a hospital in Chandigarh, the Punjab state capital, found him dead on arrival, Anil Kumar said.

The boy fell into the well outside his house in Sangrur district last Thursday and was stuck at a depth of 125 feet (38 meters), the Press Trust of India news agency said. Authorities dug a parallel well in an attempt to save the boy.
Wells dug for water are often left uncovered in India. /ee